Dreaming of the Loire Valley: Exploring the Treasures of Bourges and Chartres 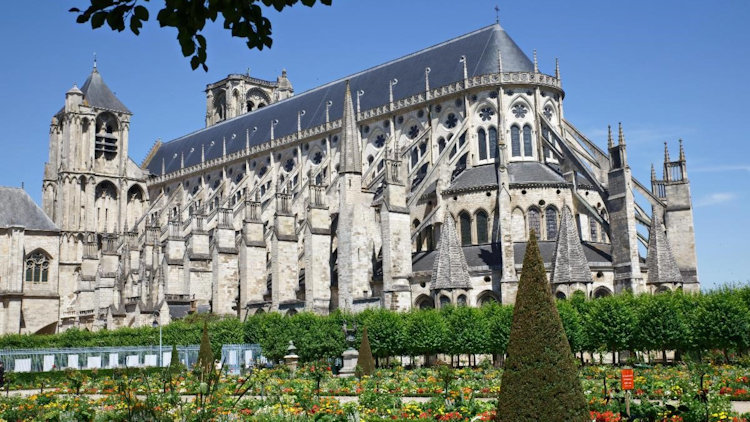 Bourges and Chartres are two of the Loire Valley's most famed cities, both of which are home to cathedrals listed as UNESCO World Heritage Sites. Would-be travelers will find plenty of culture, unique local sites, gastronomic experiences and much more in both of these iconic Loire Valley cities.

Bourges
The crown jewel of Bourges, the Saint-Etienne Cathedral was built during the 12th century on the city's tallest hill. The first cathedral ever built south of the Loire River, the Saint-Etienne Cathedral was built in the unique style of French Gothic architecture, similar to Notre-Dame de Paris. The city is also home to the Jacques Cœur Palace, a splendid edifice built in the 15th century. The palace's namesake was one of the wealthiest men in France, who became the right hand of King Charles VII. In the center of the city lies the Marshes of Bourges, which served as a way to protect the city in the Middle Ages, but have since been converted into gardens for visitors to walk through or tour by boat. In nearby locales, guests can tour a variety of châteaux including the Château de Meillant and the Château de Menetou-Salon, which is also home to an 11th-century vineyard. Travelers can also explore the beautiful gardens of the Château de Ainay-le-Vieil and the Orsan Priory.

For a taste of local cuisine, Bourges offers no shortage of options. Les Petits Plats du Bourbon offers classic French bistro dishes with a local twist using only seasonal produce. La Gargouille, which is located right under the Saint-Etienne Cathedral, offers exceptional views of the cathedral from its indoor terrace and offers dishes using vegetables and fruits supplied by the Marshes of Bourges. C'heu l'zib is the most talked about restaurant in the city, emblematic of French countryside cuisine with a classic menu, rural decor and the warm and friendly Fontaine family who run the restaurant. For a gourmet gastronomic experience, Cak'T is tucked away in an old 14th-century cellar, offering sweet treats made from family recipes.

There are many places throughout the city to take home local flavors as well, such as Maison Mercier for fantastical chocolate creations by chocolatier Daniel Mercier. La Maison des Forestines is known for its signature forestine, an almond and hazelnut praline flavored with chocolate. The Atout Fruit Boutique sells a range of 140 flavors of syrups and sauces from Monin, which was founded in Bourges; the shop also features an alcohol-free bar and tea room where guests can taste seasonal fruit and vegetable juices.

For places to stay while in Bourges, the 4-star Hotel Villa C was converted from a 19th-century mansion to a boutique hotel and is ideally located near the train station and the city center. The elegant Hotel de Panette was converted from an 18th-century mansion, today offering three unique decorated rooms, inspired by some of the many who have stayed in the hotel over the past three centuries. The charming Maison d'hôte L'Oustal has rooms named after Camille Claudel, Coco Chanel, Liane de Pougy and Colette, which emulate the lifestyle each of these women lived.

Chartres
Chartres's Notre-Dame Cathedral is also named after the Virgin Mary and was often a pilgrimage site during its early days as it housed reputed artifacts from Mary herself. Throughout its eight-century long history, the cathedral had disastrous fires and was rebuilt several times. Today, the cathedral stands tall as a UNESCO World Heritage Site and is one of the most complete and best preserved of France's Gothic cathedrals. Behind the cathedral is the Bishop's Garden, a labyrinthine garden that also houses ruins of the cathedral's past. Another famous site, the Musée des Beaux-Arts, is home to the Episcopal Palace, a 12th-century mansion that has been reworked several times and once housed Henry IV during his coronation and Napoleon in 1811. Just outside the city, travelers are encouraged to visit the Château de Maintenon or cycle down the Veloscenic Cycle Route. The route is 68 miles long from Epernon to Nogent-le-Rotrou but as it leaves Chartres, travelers will be walking or cycling alongside the Eure River. The neighboring town of Bonneval is also must-see; the medieval city is known as "Little Venice" thanks to its canals and travelers can tour the city by an electric boat ride.

For local dining options, the Michelin-starred Le Georges is a must for foodies, which pairs a classical atmosphere with modern cuisine. Le Moulin de Ponceau is located in the heart of the historic center along the Eure River, inside a 16th-century house. Chef Paul DeFrance works only with the freshest produce to make his gastronomic creations. For a little taste of everything local, Gabin, Marcel et Ferdinand offer a variety of tapas-style dishes, wines, beers, liquors and teas for guests to try. Travelers are also encouraged to seek out local dishes like pâté de Chartres, which dates back to the 18th century and is made with partridge, pheasant, foie gras, truffles and spices, all in a pastry crust. Travelers should also try mentchikoff, a chocolate-coasted praline with Swiss meringue, created in 1893 during the Franco-Russian alliance.

The Hotel Le Grand Monarque is one of the best places in Chartres to stay. Its sophisticated decor has been meticulously designed to recreate the atmosphere of the early 1700s while mixing traditional and contemporary styles. Located in the historic center of Chartres and close to the Cathedral, La Maison Ailleurs is a peaceful and charming bed and breakfast that was once the home of the former Bishop of Notre-Dame.