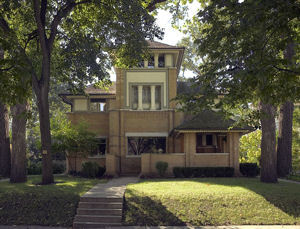 Wright Plus 2010, hosted from 9 a.m. to 5 p.m. Saturday, May 15, features magnificent private residences from Oak Park and River Forest, IL and tickets are available via Internet only at GoWright.org. Tickets are $80 for Frank Lloyd Wright Preservation Trust members and $95 for non-members.

Guests will enjoy interpretations based on in-depth research of the homes' history and architecture, including discussions of the original occupants' lifestyles. This exceptional housewalk, which attracts visitors from around the world, offers intimate looks at a collection of beautiful homes lining the historic streets of Oak Park and River Forest. The Solomon Thatcher Jr. House (1874) and David A. Thatcher House (1880) are new to the housewalk and the Frank W. Thomas House (1901) is open to the public for the first time in 21 years. Noted architects represented on the 2010 tour include Wright, Webster Tomlinson, Thomas Tallmadge, Vernon Watson, E. E. Roberts and William Drummond. Tickets also include entry to three landmark public buildings by Wright: the Robie House, Unity Temple and the Frank Lloyd Wright Home and Studio.

The River Forest Women's Club (1913) was recently converted into a private residence. The current owners oversaw the restoration of the property and its transformation from a public building to a private residence. The combination of historic preservation and green technologies is particularly interesting as it features solar panels on the roof and geothermal heating and cooling. The home has won the Landmarks Illinois Preservation Project of the Year award as prior to the current owners the structure was on the list of most endangered buildings.

The Davenport House (1901) is owned by a restoration architect, and is currently undergoing restoration. The Frank Lloyd Wright house will be restored to its original design, as alterations are removed and original finishes have been uncovered.

The Chairman's Reception and Twilight Tour kick off the Wright Plus experience with a rare Twilight Tour of the Frank Lloyd Wright Home and Studio in Oak Park and is proceed by an elegant reception at the spectacular George D. Webb House (Henry K. Holsman, 1910, Oak Park, IL). The Friday Excursion, Prairie Home and Gardens, is an enlightening discovery Chicago-area Prairie period marvels. Guests visit the privately-owned Avery Coonley Residence and Coach House (Wright, 1907) in Riverside and travel to Lincoln Park's Alfred Caldwell Lily Pool. Originally a Victorian garden, this hidden treasure is one of Chicago's most notable Prairie landscapes. While in Lincoln Park, guests explore notable buildings by architect Joseph Lyman Silsbee, Wright's first employer in Chicago. Enjoy an elegant picnic lunch at historic Café Brauer which was designed in the Prairie style by architect Dwight Perkins in 1908.

The Exclusively Wright Dinners offer an intimate experience combining a magical Frank Lloyd Wright space and the exquisite cuisine of an acclaimed chef. The evening includes champagne, live music, private tours and conversations with the current owners. Concluding the extended weekend is the Sunday Smart Start at the Robie House, a luncheon event featuring behind-the-scenes tours of Wright's masterpiece and viewings of original Robie House furnishings at the Smart Museum of Art. The Ultimate Plus Weekend Package is highlighted by three night's accommodation in a deluxe room (double occupancy) at the historic Carleton of Oak Park, Official Hotel of Wright Plus 2010, and transportation from hotel to all events.