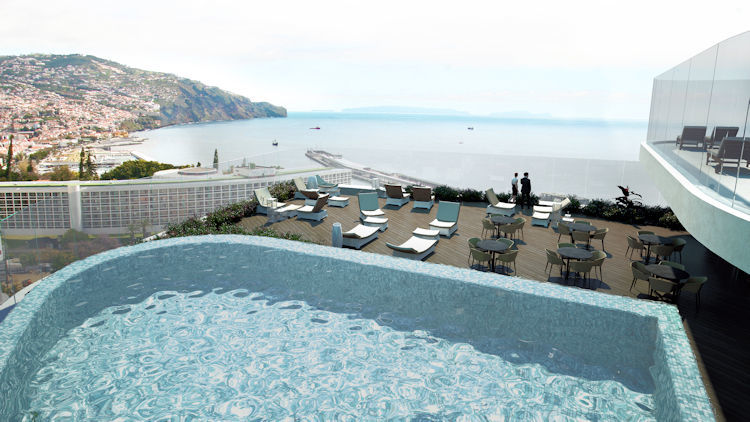 Madeira, Portugal, will see three new luxury hotels opening this June. The Savoy Palace, Les Suites at The Cliff Bay and Pestana Churchill Bay are all set to open on the Portuguese island in the North Atlantic.

With dramatic volcanic landscapes, warm year round weather, beautiful mountain trails, wines and tasty food, Madeira is an emerging destination for Americans. It was recently listed on Travel + Leisure’s top places to visit in 2019. And, TAP will offer one stop flight service for seven US cities this summer for the first time.

Influenced by Belle Époque sophistication, The Savoy Palace Hotel is Madeira’s new five-star property and member of the ‘Leading Hotels of the World’, located between the ocean and the city of Funchal. The contemporary hotel offers a mix of classic luxury with modern comfort, featuring 352 rooms and suites, eight meeting spaces and a congress room with capacity for 1,400 people. The Savoy Palace Hotel has five restaurants, six bars and a Spa with 11 treatment rooms.

Les Suites at The Cliff Bay

Set on a hilltop with amazing sea views, Les Suites at The Cliff Bay is the new five-star resort offered by the Porto Bay Hotels & Resorts group. The new property is adjacent to The Cliff Bay Hotel and features 23 luxury suites equipped with a kitchen and dining area and surrounded by extensive gardens. Guests at Les Suites have access to all The Cliff Bay Hotel’s facilities, including a 2 Michelin-star restaurant with an ocean view, two bars, Spa and wellness facilities and an infinity pool. With direct sea access and close to the city’s dynamic shopping area, Les Suites at The Cliff Bay has the perfect location for enjoying the best of sunny Madeira.

Overlooking the bay that inspired Winston Churchill’s paintings in the 1950s, Pestana Churchill Bay is the first hotel on the waterfront of the scenic fishing town Câmara de Lobos. The new five-star hotel offers 57 contemporary-styled rooms, restaurant and bar services and a panoramic rooftop pool with views over the sea and the colorful bay. Just a few minutes away from the capital of Madeira, Pestana Churchill Bay is the perfect place to enjoy a relaxing vacation in an authentic setting.

The Madeira Islands, an archipelago 750 miles southwest of Lisbon in the Atlantic Ocean, has a nearly perfect climate—warm in winter and never too hot in summer.

Ancient volcanic cliffs that rise dramatically from the sea dominate Madeira fascinating landscape. When Portuguese explorers came upon the Island of Madeira in 1420, they thought its dark cliffs signaled the gates of hell. Nothing could have been further from the truth. The steep rise creates six unique climate zones, each with its own beautiful flora and fauna that contribute to comparisons of Madeira with Hawaii.

Madeira, Portugal - The Pestana Churchill Bay, the first Pousada de Portugal on Madeira, is set to open in Câmara de Lobos on June 7th. The name comes from the view over the picturesque Câmara de Lobos Bay, one of the area’s greatest attractions. The landscape charmed British Prime Minister, Sir Winston Churchill, who vacationed on the island with his family in 1950. Churchill painted the bay and the local photographer Raul Perestrello captured this iconic moment.

Set in the heart of Câmara de Lobos’ port, the Pestana Churchill Bay – Pousada & Historic Hotel blends in with the village’s historic architecture and natural landscapes. Just a 10 minute drive away from the island’s capital, Funchal, Câmara de Lobos is also a short walk from the cliffs at Cabo Girão, known for a suspended glass platform overlooking the Atlantic.

This new Pousada project turned a historic property with a cultural heritage into a comfortable hotel with authentic character. The building is located on the waterfront, and offers 57 modern rooms, a local restaurant, bar, a panoramic rooftop pool and also a gym, sauna and a spa treatment room.

The port is now commonly referred to as "Winston Churchill Bay" due to the visits of the famous stateman. The entrance lobby of the Pestana Churchill Bay – Pousada & Historic Hotel will feature a bronze sculpture of Sir Winston Churchill made by Portuguese artist Martim Velosa.

Pestana Hotel Group currently owns and manages 12 properties on the Madeira Archipelago (Madeira Island and Porto Santo Island). Two other hotels are set to open on Madeira this June are The Savoy Palace and Les Suites at the Cliff Bay. The first is a five-star 352-bedroom property set between the ocean and the city of Funchal, inspired by Belle Époque sophistication. The latter is adjacent to the Cliff Bay Hotel and offers 23 luxury suites secluded in extensive gardens and with access to all the hotel’s facilities.

10 interesting facts about Madeira
1. Madeira is actually an archipelago made up from three islands: Funchal, Porto Santo and Desertas, a protected natural reserve;
2. Locals call Madeira a ‘Swiss cheese” due to the 150 tunnels cutting through the mountains;
3. Madeira invented the ‘Nikita’ cocktail in the 1980s, made from beer, ice-cream and pineapple;
4. On average, 16 tons of bananas are produced in Madeira each year;
5. The Ukulele was invented in Madeira before being brought to Hawaii;
6. Madeira means wood in Portuguese and the island got the name from the abundance of this natural resource;
7. The Founding Fathers toasted to US Independence with Madeira Wine;
8. Madeira’s endemic ‘Laurisilva’ laurel forest dates back to 20 million years ago and is a UNESCO World Heritage Natural Site;
9. Winston Churchill made paintings of the colorful fishing town Camara de Lobos during his visits in the 1950s;
10. Besides the unique accent, Madeira also has a regional lingo that is different from continental Portuguese.