5 Traditional Haitian Dishes You Should Try 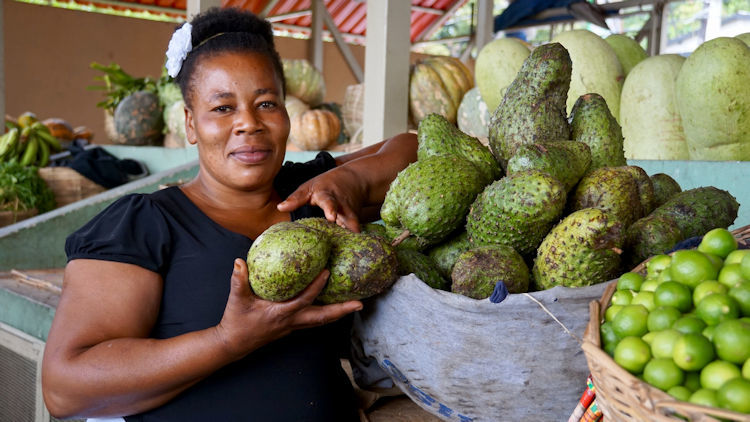 Food can tell you quite a bit about a culture, its history and its people. And this is definitely true of Haiti. This beautiful mountainous and verdant island nation lies in the Caribbean Sea, sharing the island of Hispaniola with the Dominican Republic. Although Haiti is not at the top of most tourists’ Caribbean travel locations, it sure deserves to be. With its powder soft sand beaches at the edge of crystal waters, vivid art scene and warm, inviting smiles, the Haitian people have a lot to be proud of. One of these sources of pride comes from their food.

Commonly known as “black rice,” diri ak djon djon is the real black gold, and a true traditional food of Haiti. Djon djon (Kreyol for mushroom) is rice cooked in a broth created by a mushroom that is commonly found in the northern parts of Haiti. It often has lima beans or green peas in it, and it’s further flavored with thyme, a scotch bonnet pepper and garlic. Once you’ve tried it, you will never look at regular rice the same way again.

The dish of freedom. It’s a pumpkin or squash soup that’s always served on New Year’s Day, which is also Haiti’s Independence Day. It’s a thick and savory soup that traditionally has beef and vegetables, and it’s flavored with thyme, clove, parsley and chilis. The enslaved Haitians were forbidden from eating the soup, but had to serve it to their oppressors. When the Haitians acheived the magnanimous honor of gaining independence following a successful slave rebellion in 1804, it became the symbol of freedom and liberty.

Legim is a Saturday served favorite that leans heavily on Haiti’s African roots. There is no shortage of variations of this dish, but the base is always the same, mashed eggplant and other vegetables like chayote, carrots and green beans. It’s a flavorful and slow cooked stew that’s traditionally cooked with beef, but you will find it with just about any type of animal protein. It’s usually served with rice or cornmeal.

Chicken and cashews take the lead in this traditional dish. The chicken is marinated in a traditional epis (ground herbs, garlic and celery), spiced, steamed and pan fried with tomato, onion and tomato paste. Boiled cashews are added near the end of the cooking to deepen the flavor and add a little crunch. This dish is a Sunday fave for many Haitian households.

Griot is a cubed pork dish that’s simmered slowly in a marinade that includes lime juice, chilis, and onions before being fried. The marinade becomes more like a sweet, tangy, spicy glaze. Griot is often served with rice, djon djon or rice and green peas. The dish gets its name from the traditional African storyteller, historian and culture keeper. Because pork was a rare find, it was only eaten at festive or ceremonial times where a griot would often be present.

No matter what item you try, from pikliz to mais moulin, Haitian cuisine is absolutely delicious, rich, hearty and worth every fork full. If your mouth is watering, find a Haitian restaurant to visit until you’re able to make it to the country itself. You won’t be disappointed.