7 Most Luxurious Airports in the World 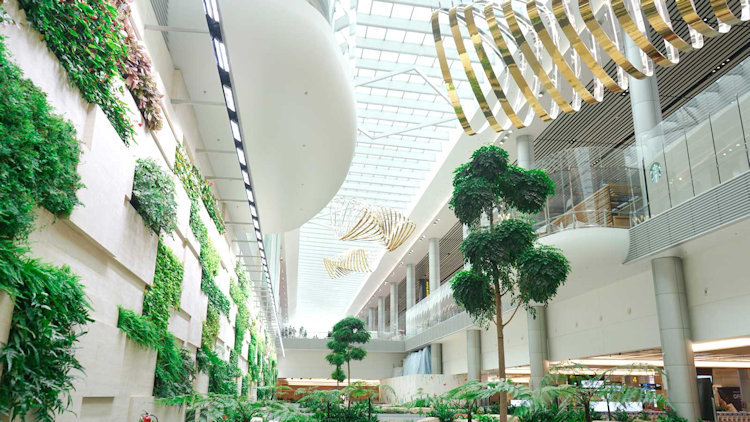 Whether you have booked a family holiday or traveling for business, if it involves visiting a foreign destination chances are you will be making a trip to the airport. Each trip will actually involve you setting foot in two airports, some people see this as a strenuous task and get increasingly frustrated having to wait around for hours in a dull environment which isn’t exciting.

In more recent years, the big bosses of airports have taken note of how much an airport plays a significant role in people’s experience of travel.

Airport bosses have begun to think about providing a pleasant atmosphere in which traveler’s can relax and have an option to endure a range of activities before embarking on their travels. From 24-hour cinemas to an arcade room the airport doesn’t have to be your worst nightmare.

The experts at Baltic Travel Company have identified the 7 most luxurious airports in the world which wouldn’t make you sad if your flight was delayed – so let’s find out what makes them so special.

1) Hong Kong International Airport
HKG welcomes 63 million passengers per year to its high-tech surroundings. The airport’s Aviation Discovery Center turns passengers into pilots…in a flight simulator. The airport is also home to the Dream Come True Education Park which encourages kids to use their imagination by dressing up in their dream job uniforms – this is perfect for parents who wish to keep their children busy whilst they play an 18-hole round of stimulated gold at GreenLive AIR. HKG gives passengers the option to relax in the movie theatre which is actually Hong Kong’s biggest IMAX screen.

2) Copenhagen International Airport
Copenhagen Airport is home to extensive dining, shopping and its very own airport for kids making it family friendly. The airport sees 20 to 30 million passengers per year due to its accessibility to the city. It has amenities like swimming centers, showers, museums, Nordic cuisine and gardens.

3) Abu Dhabi International Airport
Abu Dhabi is a very luxurious international airport. With popular visitors being business travelers and billionaires, the gateway to the U.A. E’s capital is rife with VIP lounges, fine dining spots and duty-free shopping. The level of duty-free splurging is another level with the links of Bulgari jewellery, Swarovski crystal, Hermes scarves and even solid gold!

4) Munich International Airport
The second-largest airport in Germany – and it holds masses of booze. The Airbrau Biergarten is the largest roofed-in beer garden in the world. To add to the authentic experience it even has chestnut trees and a maypole. The airport also holds an on-site brewery where you can do tours and tastings and an added further 50 bars and restaurants. If all that has taken its toll on you – have a nap in one of the sleep pods.

5) Zurich International Airport
Switzerland is home to cleanliness and efficiency so no doubt this is shown in their airports. As opposed to reaching for the burgers and fries, Zurich is actually one of the healthiest airports in the world. You can do a spinning class on the indoor bikes or visit the fitness centre for some weight training. They also have a dedicated lounge to cigars which is so big that it has it’s very own hangar. Another unique feature is that the trains which transport you between terminals play the soft sound of Alpine cattle bells.

6) Singapore Changi International Airport
Having received the top prize at Skytrax’s World Airport Awards in consecutive years, this is clearly an airport with a lot to offer. With two parallel runways and 4 terminals, this airport serves about 60 million passengers every year and leaves passengers feeling overjoyed with what is on offer. The airport has three gardens inside named orchid, sunflower and cactus. It also has a movie theatre, an entertainment deck with consoles from Xbox to Kinect. The best thing about all of the entertainment is that it’s free – as long as you’re a passenger waiting for a flight.

7) Seoul’s Incheon International Airport
An ice rink in the airport? Only in the five-star rated airport which is actually the largest in South Korea. This is a surprising spot for international and local musical attractions – acapella, orchestra and band concerts fill each season at Incheon Airport’s passenger terminal where daily performances are held. It also holds the largest duty-free shopping centre in the world with the ice rink, spa services, scenic gardens with fountains and sculptures, and baby lounges that are exclusively for passengers with infants – perfect for everyone.