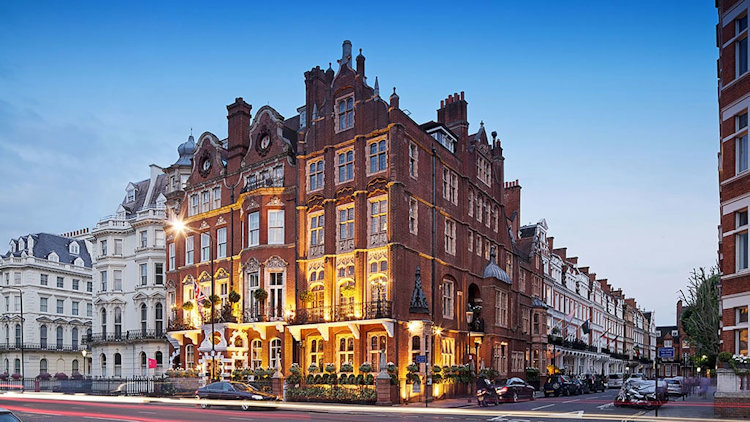 This elegant property—a historic mansion hotel—is perfectly located in the heart of London, opposite Kensington Palace and Gardens and close to the Royal Albert Hall.

Like all 17 hotels in the Red Carnation Hotel Collection, each room at The Milestone is individually designed with original artwork and antiques, is family owned and run by the Tollmans--who have an immense passion for hospitality--has world-class dining that includes president and founder Beatrice Tollman’s signature dishes and has a team of devoted, warm and engaging staff.

What makes The Milestone Hotel unique in London is the exceptional packages and special experiences offered, such as a guided tour of the Houses of Parliament, a tour of Kensington Palace and a hotel tea tutorial—just to name a few.

Below is a list of seven unforgettable experiences offered by The Milestone Hotel that you can share with your family, friends and loved ones:

1. Audio guided tour of the State Rooms at Buckingham Palace and Gardens highlights tour
As part of a visit to Buckingham Palace, combine a visit to the State Rooms with a guided tour of the most remarkable features of the beautiful gardens. Described as 'a walled oasis in the middle of London', it boasts more than 350 types of wild flower, over 200 trees and a three-acre lake. The Garden Highlights Tour includes the beautiful Herbaceous Border, the summer house, the Rose Garden, the enormous Waterloo Vase and the Palace tennis court, where King George VI and Fred Perry played in the 1930s.

2. Behind the scenes at The Royal Albert Hall
You can experience this on various times and dates throughout the year. Unfortunately, access to the hall isn’t possible while some shows are in-house. There are 2 different types of tours – Behind the Scenes and the History of the Hall tour. (From £13.75 per adult)

4. Picnic in the Park
Our Butlers will set up a savory or Afternoon Tea picnic, including a bottle of champagne, in Kensington Gardens so all that’s left for guests to do is sit back and relax and feast on the hand-made delicacies included in your hamper. (From £145 for two people)

6. Horse-riding in Hyde Park
Established in 1965, Ross Nye Stables in Hyde Park is the longest-established riding school to offer riding in Central London. Horses and riding have been synonymous with Hyde Park since the reign of Henry VIII, when it was used as a hunting ground for the Tudor Court. The Carriage horses from the Royal Mews at Buckingham Palace are still exercised daily in the Park, so you may see liveried coachmen driving a team of beautiful Windsor Greys along Rotten Row, early in the morning. Hacking and lessons available in Hyde Park for adults and children. Most rides take place on the sand tracks in Hyde Park roughly 5 miles of track. (Private ride: £90 per hour per person. Group: £75 per hour per person)

7. Etiquette classes
The Milestone offers three different etiquette classes suited to your preference and all involve social media etiquette – navigating the dos and don’ts and how to conduct yourself online. Formal dining at the hotel could also be added.