A Guide to Israel’s Holy Sites for Holiday Travel 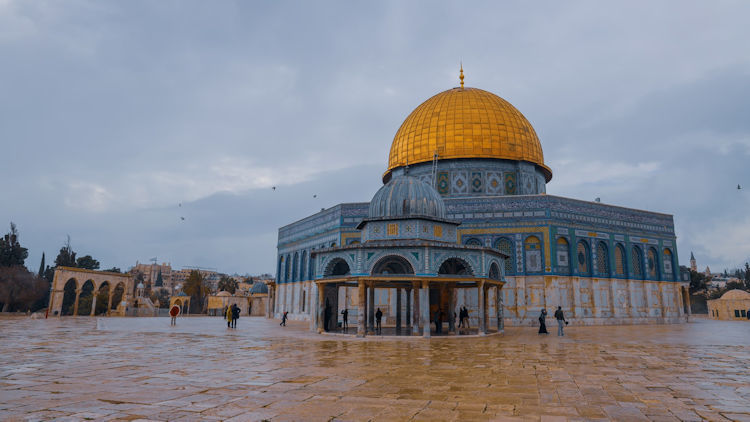 The holiday season is quickly approaching and no matter which holiday you celebrate, Israel is home to some of the holiest sites in the world for those of the Jewish, Christian and Muslim faiths. From the Old City of Jerusalem to the Sea of Galilee, Israel’s holiest sites celebrate centuries of different religions and beliefs, making it one of the most sought-after destinations for religious travel. Now is the perfect time to plan ahead and book a trip to Israel!

Dome of the Rock at Temple Mount (pictured)
Temple Mount, home to the Dome of the Rock, found in Jerusalem’s Old City, is arguably the most holy place in Jerusalem as it has major significance to Islam, Judaism, and Christianity. For Jews, the Temple Mount is the former site of the first and second temples of ancient Israel. The Foundation Stone is thought to be where Abraham prepared to sacrifice his son Isaac to God in the Book of Genesis. It is the most sacred site in Judaism as the Foundation Stone under the dome is believed to be where Earth was first created. For Christians, the Jewish temple located here was where Jesus prayed daily and later preached with his disciples. For Muslims, this is the third holiest site in Islam, after Mecca and Medina in Saudi Arabia as the rock under the dome is where the Prophet Muhammed left Earth to visit heaven on a winged horse during his Night Journey in the seventh century.

Western Wall
The Kotel (the Western Wall) is viewed by Jews as being the closest location to the Holy of Holies that is referred to in the Bible. The Holy of Holies was a sanctuary room inside the Solomon Temple that housed the Ark of the Covenant, which contained the Tablets of the Covenants, the two stone tablets that had the original Ten Commandments given to Moses on Mount Sinai in biblical times. After the destruction of Solomon’s Temple, the ark was never found again. It is believed that the Holy of Holies room was located in a western portion of the ancient temples therefore, The Western Wall is the closest location to where the Holy of Holies once stood. Currently, anyone of any faith can access the Western Wall to pray and leave a folded note in the cracks between the stones of the wall. There are also tunnels that run alongside and under the wall that offer glimpses at the ruins of the old temple mount and how there are many layers to the wall that remain underground.

Jordan River
The Jordan River, which flows from Lake Hula, through the Sea of Galilee and ends in the Dead Sea, is known as the border for the Promised Land. In the Old Testament, Joshua and the Israelites crossed the Jordan and when doing so the river became dry. In the New Testament, Jesus was baptized in the Jordan River by John the Baptist, where he was then spiritually born. Christians from around the world pilgrim to the believed baptismal site, Qasr al-Yahud, to be baptized in the waters of the Jordan similar to Jesus. For Christians, Qasr al-Yahud is the third holiest site.

Church of Holy Sepulcher
The Church of the Holy Sepulcher, located in the Christian Quarter of Jerusalem’s Old City, is home to the two holiest sites in Christianity. The church was built on the site of Jesus’ crucifixion, and it contains Jesus’ empty tomb where he was buried and resurrected. Today, control of the church is shared between the Roman Catholic, Greek Orthodox, and Armenian Apostolic churches. The three denominations approved a significant restoration project in 2017 to restore Jesus’ tomb and the shrine that encloses it. This church is a major pilgrimage center for Christians from around the world.