A Guide to Seeing the Northern Lights in Canada 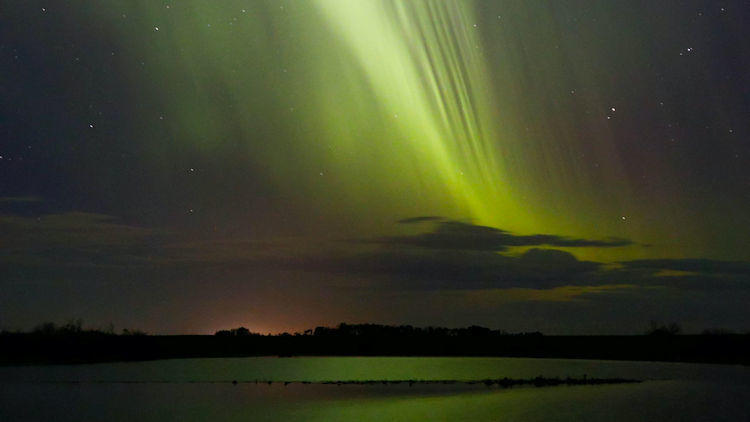 If you are wondering when to see the Northern Lights in Canada, you have come to the right place. Aristotle described it as "a tear in the sky behind which we see flames,"; and Galileo gave it its name.

Born from the meeting of solar wind particles and gases from the Earth's upper atmosphere, the aurora borealis or Northern Lights is a phenomenon that can be observed beyond the Arctic Circle, between the 65th and 75th parallels.

The North is perfect for watching this phenomenon, best between October through March, but in theory, the Northern Lights can be seen anywhere in Canada all year round. However, three conditions must be met:

Do I need a visa to see the Northern Lights?

It’s crucial to remember that every foreign visitor to Canada (except US citizens) must have an e-Visa obtained before the trip takes place.

eTA to Canada is an electronic entry permit that grants a 5-year validity, numerous entries (with each one being as long as 6 months), and tourism and business-related usage.

TIP! Apply for your visa to Canada at least 3 business days prior to the planned trip to receive the approved entry permit on time.

Approved e-Visa to Canada will be delivered directly to your email box in the form of a PDF file. Moreover, it links to your passport, which means there’s no need to print it out!

Use your phone or any other device and apply for Canadian visa online within minutes from home!

What is the best time to see the Northern Lights?

Putting it shortly: Winter. From December to March, the nights are the longest, but also the coldest and clearest.

However, variations exist by province: in the Yukon, you will observe the aurorae in the fall, winter, and spring; in the Northwest Territories, if the magnetic activity is observed 240 days a year, fall and winter are the best seasons to observe them. In Alberta, go for fall.

Where can I see the Northern Lights for the best views?

People react differently when they are in the presence of northern lights. Some scream, others cry, whereas some just remain silent in the face of these fantastic colors.

So, where can you experience the breathtaking Northern Lights of Canada?

Yellowknife is the capital of the northwestern territories in Canada and its largest city. It is called the "Aurora" village because the phenomenon occurs very frequently there.

Tourists go there to enjoy these lights and other special activities through which they can witness the beauty of the cosmic phenomenon near the shores of Great Slave Lake.

It is located on the northern latitude and is considered the Wood Buffalo. Moreover, the Jasper National Park is a popular place for viewing.

Residents of Churchill, North of Manitoba County on the Churchill River's mouth, say they see up to 300 northern lights a year.

The best twilight period in this city is from January to March, when the Northern Lights Festival is celebrated.

Natural Habitat Adventures in suburban Churchill has a dome with glass walls and roofs to monitor 360-degree visibility comfortably and in the middle of nowhere, the northern lights.

Whitehorse, Yukon, is an easily accessible place to enjoy the Northern Lights in Canada, so much so that in the suburbs, there are great hotels to enjoy the natural phenomenon.

Also, twilight fishing tours depart from the Whitehorse for remote locations where you can have a better experience.

This secluded park near the Yukon's edge is a great place to see the Northern Lights most days of the year.

The park is named after Lake Muncho and is 12 km long and 1 to 6 km wide. The beautiful jade green color of the water is produced by the copper oxide present in the rocky mantle.

Battle Harbor was a major center for salting cod and fish in the 18th and 19th centuries, being called the "Labrador Capital."

The ancient fishing facilities and boats are left in the past as a museum, where tourists take the opportunity to take pictures to remember them.

It is now a great place to see the aurora borealis in Canada. It is open only between June and September.

People visit Dawson on the Porcupine River banks to learn about its fascinating past and see the Northern Lights, which according to the official gateway to the city, form between the end of August and April. The Aurora Inn offers packages that include aurora-watching tours.

If you plan to watch the Northern Lights phenomenon, get your visa, pack your bags, and head over to Yukon, Manitoba, Alberta, or the northern territories.

The places we have listed above are the best spots to watch the lights during winter! Don’t miss out on this experience while in Canada.