From Water to Wine: A Journey Up The Dramatic Douro River 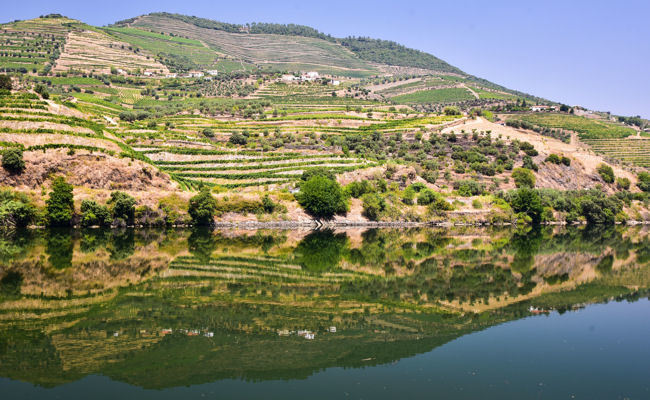 As late afternoon sun baths the 17th century Mosteiro da Serra de Pilar in honey-hued light, and dazzles off the intricate ironwork of the Dom Luís I Bridge, the shadows of Porto’s ancient riverfront merchant houses lengthen below, their pastel facades aglow. The al fresco seafood restaurants that line both sides of the Douro – Porto proper to the north and Vila Nova de Gaia to the South – are packed with locals and travelers enjoying the late summer warmth, while on the timeless waters of the river, pleasure boats and ferries crisscross in our wake.

It’s a postcard perfect beginning to my 500-kilometre 11-day journey up and down the Douro River valley, the heart and soul of northern Portugal and a historic trading route for the region’s world-renowned port wine industry. It was down the winding Douro that wine from its terraced vineyards would be shipped to Gaia on traditional rabelo sailing boats, thus evading the heavier taxes across the river. Many of the original wine merchants still have expansive operations on the south bank, narrow cobblestone lanes running down the steep slopes between the wineries’ towering, centuries-old walls. On the river front several rabelos, complete with prop casks, still ply the Douro, carrying camera-toting tourists rather than tawny or Tinta Roriz. 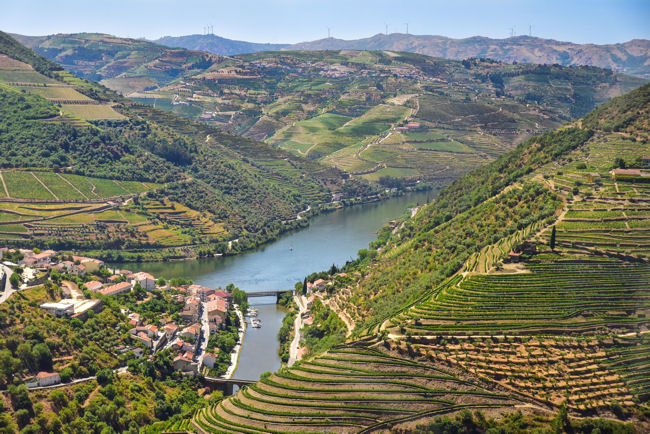 Port helped put Porto on the map, and the Douro made it happen. The Romans planted the first vines in the valley’s shale-encrusted hills over 2,000 years ago, and by the 15th century English and Scottish merchants had begun shipping the robust, full bodied wines of the Upper Douro down its waters to the Atlantic and on to Britain. So it’s fitting that the river is playing a vital role in the region’s next boom, as tourists from around the world arrive to cruise its gentle waters, sip the valley’s unique wines, and delve into the rich traditions of the Portuguese heartland.

Scenic is no stranger to the Douro, but the recent launch of Scenic Azure, one of the brand’s custom-built ‘space ships’, makes the Australian travel company the first non-Portuguese line to operate its own vessel on the waterway, heralding in new levels of luxury, service and exploration. Sleek and elegant, the Scenic Azure is an unashamedly modern vessel that offers all-inclusive luxury, from sublime staterooms with electronically-controlled sun rooms, complementary minibars, spacious bathrooms and round-the-clock butler service, through to gourmet, chef-driven dining, and a range of insightful shore excursions. By day, as the ship cruises, guests congregate on the expansive sun deck to watch the terraced vineyards drift by, and as dusk settles, they dress for dinner and make for the chic Panorama Bar, the heart of the ship, where nightly port briefings are conducted by Maria, our cruise director. These cocktail-laced talks offer up excursion options for the day ahead, all of which are fascinating and included in the cruise fare. 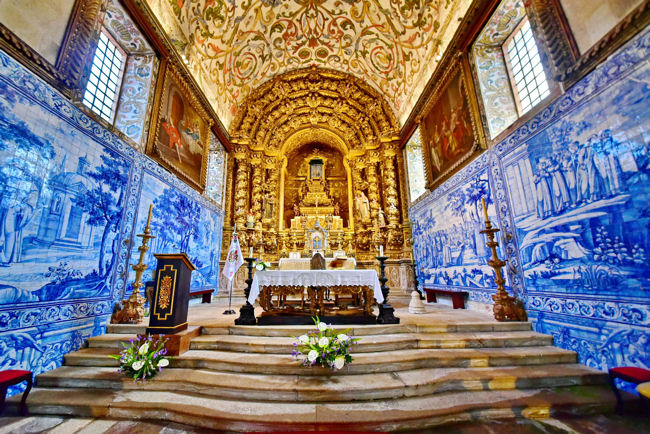 We had embarked on the first of the Freechoice excursions earlier in the day, exploring the regal halls of Porto’s neoclassical Palácio da Bolsa, walking the bustling Rua de Santa Caterina shopping street, curling our way past the merchant’s mansions which line the Atlantic coast, and gazing up at Jorge Colaço’s blue and white tiled facades at the cavernous São Bento railway station. By late afternoon we’re saying goodbye to Porto, cruising east under the guise of the expansive Episcopal Palace and dipping beneath the many bridges - the Ponte do Infante, Gustave Eiffel’s Ponte Maria, and the Ponte de São João railway arch - that leap the deep river valley. Sun worshipping tripeiros (as the locals like to call themselves) wave from the many beaches which line the river as the Unesco-listed city centre is replaced with bucolic riverscapes punctuated by weathered family estates. Our journey has begun.

Each day on the river is different; at times we cruise, passing through towering river locks and between vertiginous, honeycombed cliff faces. At others we leave the ship to explore the region’s complex history. In Guimarães we venture down cobblestone streets to explore the beautifully-preserved halls of the 500-year old Ducal Palace, the ancestral home of the first Dukes of Braganza. In Lamego we visit the stunning hilltop sanctuary of Nossa Senhora dos Remédios, a twin-towered 18th century church famed for its blue and white plaster interior, before walking the 600 ornamental steps down to the town’s vibrant main square. After berthing in Peso da Régua late one afternoon, we learn about the production of local wines at the beautiful, riverside Museu do Douro, before sipping tawny port-laced cocktails on the terrace to a backdrop of traditional Portuguese Fado guitar. With the sun dipping behind hills of endless vines, and the music flowing down to the bustling riverfront, it’s an enchanting way to end a day on this extraordinary waterway. 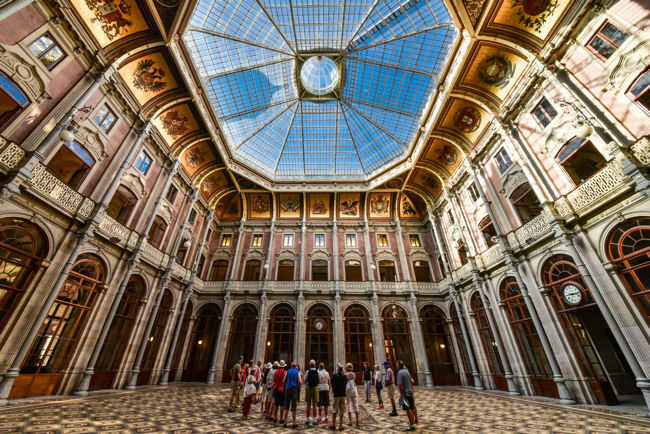 “They don’t know what they’re missing,” says one avid-cruising Melbournite during a fun debate over the merits of river cruising over ocean cruising one night over beautifully-made martinis in the Panorama Bar. She travelers 2-3 times a year with Scenic, often with girlfriends, and had always wanted to cruise the Douro. “It’s about waking up in the heart of things every day, not waking up in some port a million miles from where you want to be after a night of ocean darkness. If that’s cruising, then this is simply better!”

Scenic’s varied excursions not only map the Douro Valley’s past, but also its future. We learn how Cistercian friars lived in the 12th century with a visit to the site of the Mosteiro de São João de Tarouca, buying up handcrafted elderflower liqueur from local artisans and visiting a newly-opened museum dedicated to the preservation of its ruins. In Salamanca, at the half way point of our journey, we sample Ibérico cured meats and locally-crafted cheeses at the cathedral-esque Abastos Markets, before exploring the Spanish city’s captivating Museo de Art Deco y Art Nouveau. In the Côa Valley, there are options to visit sites of pre-historic rock art, to learn to roast locally harvested almonds, or to venture up a river tributary by canoe. In Provezende we sample the port wines of Morgadio da Calçada in the label’s 17th century manor house, now beautifully preserved as a boutique hotel and cellar door; and in Pinhao we learn how port wine is produced at a private tasting at Quinta do Bonfim, one of the Valley’s largest contemporary producers. The cellar door never saw us coming and my fellow guests and I returned to the ship lumbered down with prized finds from the Douro’s vintage years. 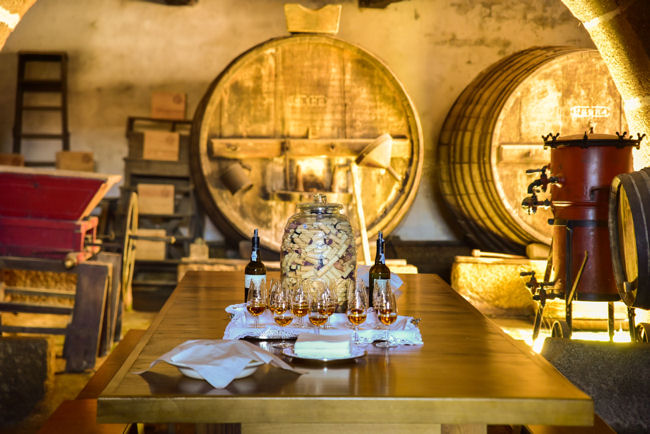 The educational aspect of a Scenic cruise continues onboard with regular lectures and lessons covering everything from Portuguese language and cooking to traditional tile painting. However, the beauty of a Scenic cruise is that you can be as active or inactive as you like and many times I find myself soaking up the captivating riverscapes from the solitude of my cabin’s sun room.

In fact, the beauty of a river cruise over an ocean cruise is that you never leave the destination. Throughout our journey the towering rock walls of the ancient river gorges; the red-roofed mansions of quinta wine estates; the mountain villages perched high above the river valley; and the iconic terraced vineyards that plunge down to the Douro’s waters are our constant companions. There’s a true sense of becoming part of the locale, rather than just enjoying a series of fleeting moments as a visitor.

This immersion continues with the ship’s sensational dining opportunities. In addition to the elegant Crystal Dining room, where multi-course a la carte dinners are complemented by buffet breakfasts and lunches; and the River Café, home to delectable cakes, pastries and afternoon teas; Scenic Azure offers Portobellos, an Italian fine dining concept matched with Tuscan wines, located at the bow of the ship; and Table la Rive, a superbly intimate dining encounter reserved for Diamond Deck guests that features a six course locally-inspired dégustation menu with sommelier paired wines, in this case the very best of the Douro. 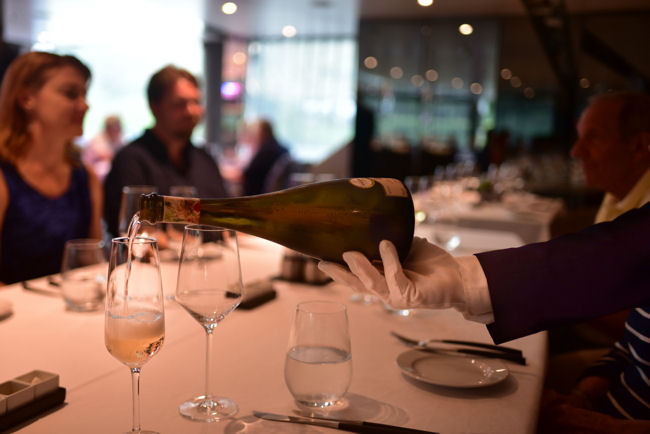 We arrive back in Porto to the cooler climes of the Atlantic Coast, now bronzed after lazy afternoons lounging around the Sun Deck’s plunge pool, enjoying al fresco barbeques, or exploring time-weathered valley villages. Our last evening is spent at a special farewell dinner hosted within the barrel-lined Burmester & Nash Distillery, which first began exporting port wines to Britain in 1750. To the haunting tones of Portuguese Fado, we toast our new discoveries, to the rich heritage of this often overlooked corner of Europe, and to the bright new future it’s set to enjoy.