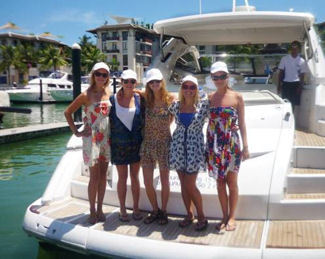 Pictured (second from left), the young princess was accompanied by four friends for lunch and a boat trip around Phuket's famous Phang Nga Bay which is renowned for its iconic James Bond Island which featured in the 'Man with the Golden Gun' with Roger Moore, as well as Phi Phi Island which appeared in the film The Beach, starring Leonardo DiCaprio.

Princess Eugenie and her friends were guests of marina developer Gulu Lalvani, a close friend of the British royal family. The tycoon founder of Binatone, the world's second largest manufacturer of digital cordless phones, is partly based in London and features regularly on the Financial Times' annual Rich List.

Princess Eugenie, 19, is the second daughter of Prince Andrew, Duke of York, and Sarah, Duchess of York. She is on a gap year before university, having completed her A-levels at Britain's prestigious Marlborough College.

It was developed by tycoon Gulu Lalvani, founder of Binatone, the world's second largest manufacturer of digital cordless phones, whose vision is to promote Phuket as a world class yachting hub in one of the world's most scenic and assessable locations.

Following the successful completion and sale of Phase I with its luxury condominiums and penthouses, Royal Phuket Marina has just completed its unique 'Aquaminium' penthouse apartments which come complete with their own integral boat berth as well as a series of ultra luxury private villas, also with private berths, which complete Phase II of the complex.