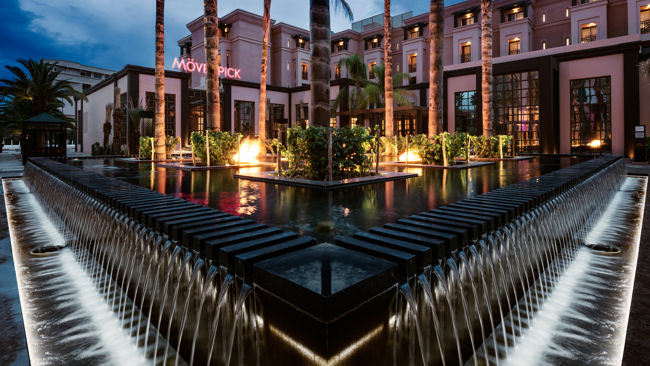 It is these characteristics that Mövenpick’s refurbished Hotel Mansour Eddahbi in Marrakech is styled upon.

Drawing on the artistic influences, the ambient colors, architecture and furnishings of the Sultan’s lifestyle and taste, the design of the Mövenpick Hotel Mansour Eddahbi takes guests on a mesmerizing journey through cloistered gardens and galleries, past fountains and decorative Moroccan arts.

Themes of desert, oasis, vegetation and wildlife run through the hotel, reflected in the various dominant shades – blue for water, beige for sand, and red for the pallor of Marrakech - while gold is omnipresent. 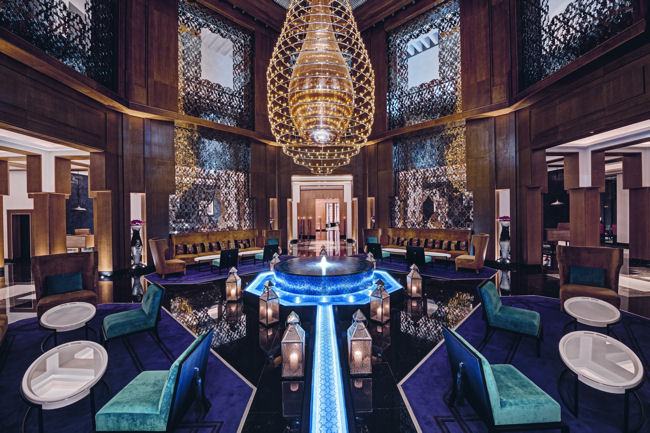 Water flows all around – splashing in fountains, dashing through ornate gullies and within the three swimming pools of the complex, offering a cooling aura of freshness and refreshment. Yet it also conveys movement, and the nomadic existence of the Sultan and his entourage.

The five-star Mövenpick hotel re-opened a year ago after undergoing a $100m refurbishment and building programme.

On arrival, guests are submerged into an imaginary oasis, passing through a promenade lined with gardens, various lounges, fountains, and water features.

Look out for giant birdcages in the reception, follow a water-path to the lobby and check-in, and then be mesmerized by a giant nine-metre chandelier in the form of an enormous water droplet hanging from the cupola. 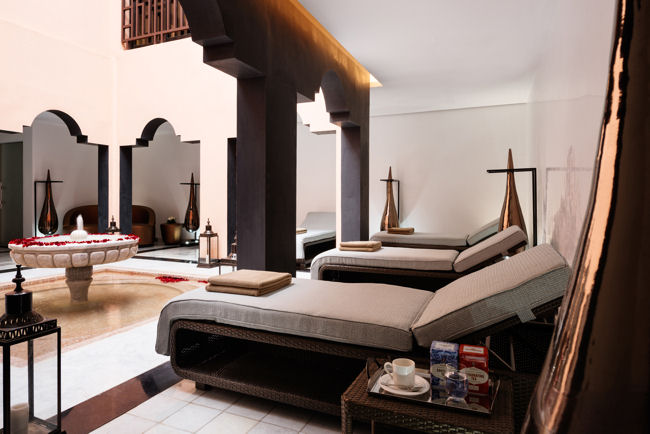 That theme of golden droplets is repeated throughout the hotel and its spa.

Born in 1549, Ahmed Al Mansour Eddahbi was a Sultan of the Saadian dynasty, remembered as a ruler who took Marrakech to new cultural heights, including the construction of the El Badi Palace.

He reigned from 1578 to his death in 1603 and as a contemporary and ally of Elizabeth I of England, became an important figure in both Europe and Africa in the 16th century. 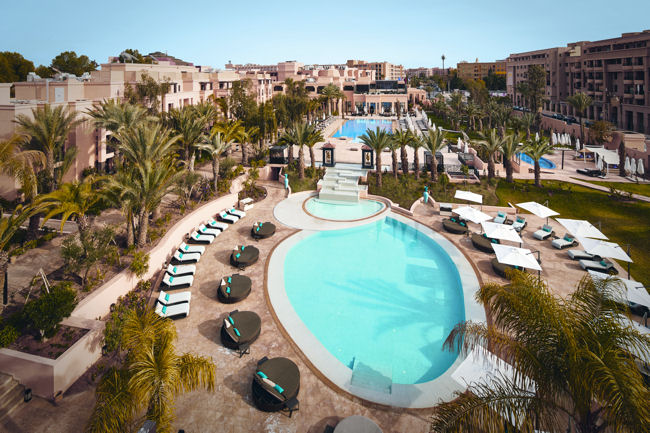 The hotel, originally constructed in 1989, sits on an eight-hectare site with 503 rooms and suites in six blocks named after the Sultan’s sons. A seventh, newly-built during the refurbishment, is named after his wife Messouda.

Food is an important aspect of the Hotel Mansour Eddahbi, which has six restaurants.

Traditional Moroccan cuisine is showcased at its premier Dahbi restaurant where you can enjoy salads and breads, couscous, pastilla, and delicious tagines where the flavors of dates, prunes and apricots rise through the meat and fish dishes. 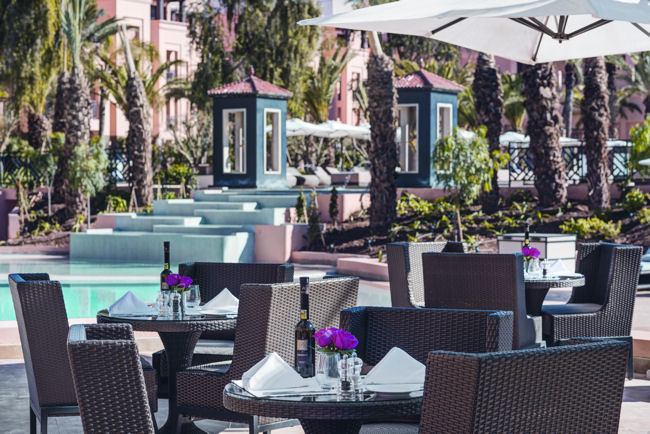 The buffet and breakfast restaurant of Saray, with walls adorned with Moroccan ceramics, has indoor and outdoor seating with some tables set amid olive trees. Astronomy is the theme in the Manso Bar and lounge with a terrace offering impressive views over the hotel complex and while Jamra is for more casual dining, Medi Terra endeavors to recreate Spanish and Italian cuisine.

The nearby Nozha coffee shop is a little gem and, of course, as this is a Mövenpick hotel ‘chocolate hour’ takes place in the late afternoon every day for guests to sample some special confectionary.

At the Mansour Eddahbi you can easily spend your days relaxing by the long main pool with comfortable sunbeds and a backdrop of palms and olive trees, and shades of pink that befit the aura of Marrakech. There is a children’s pool and play area nearby and a further pool by the Ô de Rose spa with an ambience of seclusion and peace. We slipped into the spa and wellbeing centre, which has eight treatment rooms, for a hammam and a full body massage. 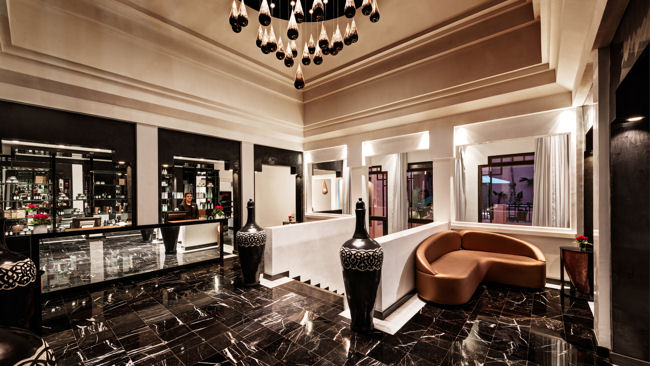 However, Marrakech is also a city to be explored. You can venture out of the hotel and wander the broad boulevards and through gardens to the historic medina in the central L'Hivernage district to get lost in its network of shops and alleys.

Experiencing the medina – a 30-minute walk or short taxi hop from the hotel - is one of the highlights of a stay in Marrakech. The approach is dominated by the landmark Koutoubia mosque, dating from the late 10th century with four golden orbs at the top of the square 69-metre minaret.

From there you can cross into the medina’s maze of alleys of pale red sandstone to discover stalls selling lanterns and ironware, potteries, spices, leather goods, textiles, souvenirs and traditional Moroccan foods. Walk deeper into the network and you come across a 16th century medrese.

There are a number of exits but we headed back to the main square of Djemaa el F’na – the assembly of the dead – and the rows of food stalls, musicians, dancers, acrobats and snake charmers, and then climbed up to the terrace of a nearby café to drink mint tea and peruse the activity from above before returning to the hotel.

Elsewhere, visit the Arset El-Mamoun gardens or the Majorelle Gardens and the Saadian Tombs, where Ahmed El-Mansour is buried, museums such as the Dar Si Said Museum or the Marrakech Museum of Photography and Visual Arts, or see the remains of the El Badi Palace.

The regeneration of the Mövenpick Hotel Mansour Eddahbi hotel was undertaken by Parisian interior designer Studio MHNA, which saw it reconfigured as a modern reinterpretation of the traditional architectural hallmarks found in noble Moroccan mansions of the 16th century. 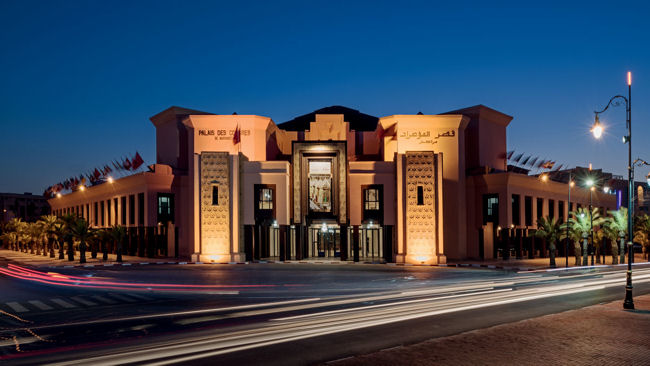 As the hotel adjoins the city’s main convention centre, the Palais des Congrès, the entry to the hotel was designed to simultaneously accommodate leisure and business clientele via two distinct guest journeys with separate paths to a dedicated lobby. The group lobby is designed to smoothly manage large flows of people, whilst the individual guest lobby offers a more private service.

Set in an suburb of Marrakech, yet within walking distance of the medina and a 15-minute drive from Marrakech Menara airport, the Mövenpick Hotel Mansour Eddahbi is an idyllic bolthole to head south to as temperatures fall in Europe and North America to discover the relaxation and winter sunshine of North Africa.