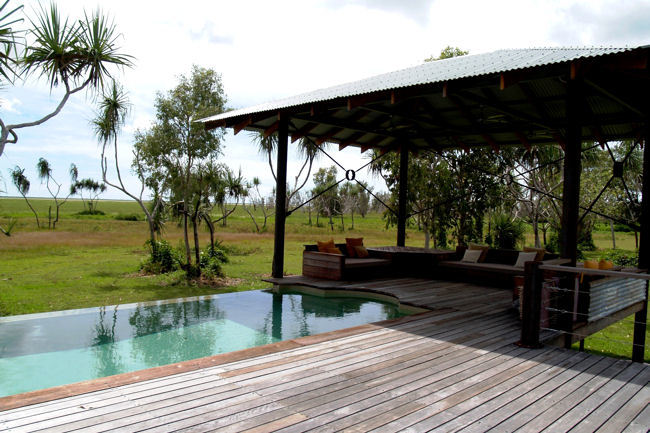 Sitting under a fan-cooled, Balinese-styled pavilion, ice cold Bombay and tonic in hand and with dinner roasting on a near-by stone camp fire, life's about as idyllic as you can hope for, in any rugged landscape. Until nature takes it one step further of course, with a Noah's Ark like procession of wildlife passing just metres in front of the luxury lodge, just as the peach plume sun settles into its daily decent.

Now Bamurru Plains, arguably the Territory's most luxurious game lodge, can't take credit for the conga line of wild boar, water buffalo and Brumbys (wild horses), but it's the camp's marriage with its stunning surroundings that make wildlife spotting here, miles from anything, a certainty rather than a novelty.

Located just off the Top End coast of the Northern Territories, and perched on the cusp of the Mary River flood plains, Bamurru Plains offers the ultimate in wild bush luxury and is the perfect place to escape to when the traffic jams, supermarket queues and deadlines become a bit much. 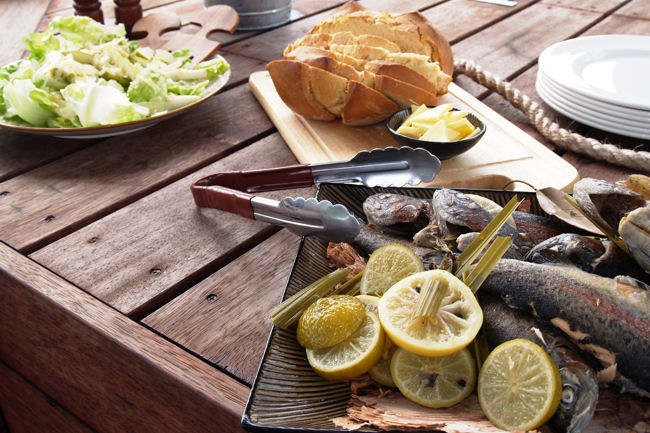 Situated on what Territorians would refer to as a "lifestyle block", the 305sqkm station plays home to all manner of wild life, indigious and permant resident; in typical NT fashion, it's a good 15 minute drive from front gate to front door. Although many of the station's well-to-do guests choose to arrive via helicopter or light plane, directly to the property's landing strip, others choose to take the overland route, a dust blown highway which cuts across the brutalized landscape from Darwin, and on which everyone is a visitor, venturing into nature epitomized.

After bumping over rutted roads reshaped after the annual flooding, past herds of sun-worshipping Brahmin cattle and the odd inquisitive water buffalo, we arrive at our rather unique accommodation. Forget tents or prefabs more nostalgic of an inner-city primary school – luxurious cabins are perched above the verge of the flood plain, close enough to the main lodge to call for help when your Sauvignon runs low, but far enough not to interfere with your enviromental voyarism.

In fact, the design of the lodge is all about nature, bringing guests to the very cusp of the Territory's famed wildlife. Don't fret, there are proper beds, air conditioning, fans and a lavish bathroom including a shower of cobble stones that bares an outdoors feel without the unwelcomed visitors - but the most important aspect is the cabin's unique stealthing technology! Using an innovative new fabric, guests can enjoy the cool, privacy of their cabin while still viewing the animals for which the station is home. 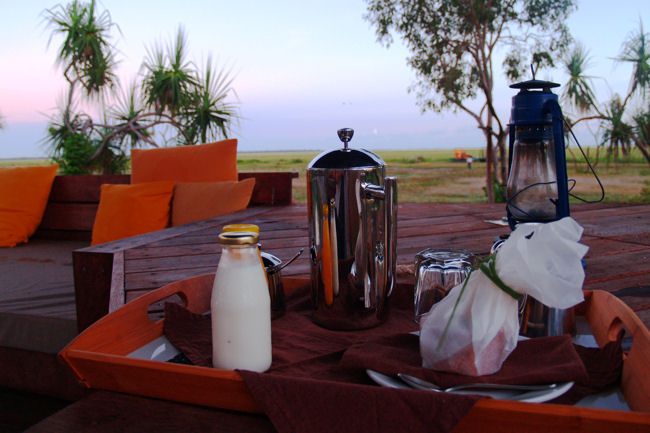 It's sunrise and coffee and wattle seed muffin are delivered by John, one of the knowledgable team that city slickers tend to cling to when venturing beyond the infinity pool and fan-driven comforts of the lodge. Many guests take their morning cup of Joe in the "viewing gallery", the little sun room off the main bedroom in each cabin; tiny, shy whallabys lope around the stilt foundation of the cabin and a short distance away, a female water buffalo splashed through the waters of the flood plain, her young trailing behind her, never more than a few meters from her protection. For the patient, silence will be rewarded with an up close and personal wildlife encounter the likes few have experienced.

Another unique aspect is climbing aboard a real airboat as seen in Miami CSI and basically any other programme filmed in Florida. Bamurru is the only place where the common tourist can climb aboard for the ride of a lifetime and the airboats, which are encorporated into the lodge's packages, take guests to the furthest reaches of the floodplains.

With a roar that echos even under the air protectors, the massive chryster engine gathers momentum and propells the teflon-coated hull across the flooded landscape. Clouds of black, squawking magpie geese climb sluggishly from their hidden nests amoungst the reeds and gossip from the branches of drowned trees. The airboats glide so effortlessly across the emerald green flood plain which looks, for all intensive purposes, like solid ground, exactly as it is half the year. But when the floods wash trillions of lites of waters down towards the coast, it creates a very special ecosystem, loved by a myrid of wildlife. 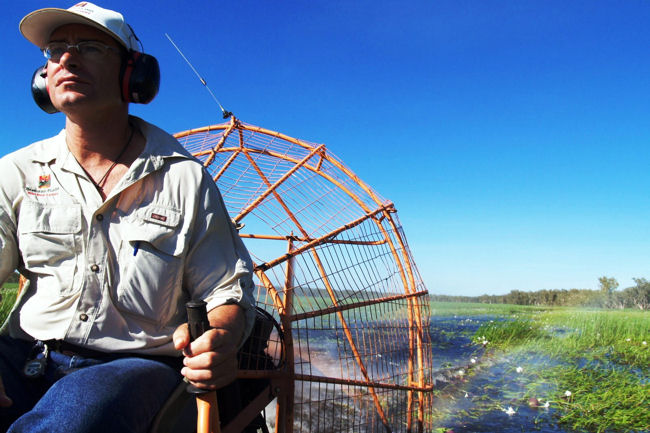 In the shade of an ancient paperbark forest, guests bob on the still, swampish water of John's favorite picnic spot. The water shimmers like charcoal silk and is home to some of the station's largest crocodiles so it's hands inside the boat. According to John, they lurk in the shadows cast by the partially submergered trees, waiting, not for tourists, but for fat baramundi to swim by.

Would-be explorers feast on sundried tomato quiche, and thick sandwiches of cheese and roasted capcium – in fact food seems to play a pivitol role at Bamurru, with multi-course dinners every night, breakfasts as wide as your imagination and lunches straight out of a National Geographic. Menus can be rather adventurous; ever thought you'd lunch on terracotta pot pies filled with camel and water buffalo? How about local scallops and crayfish, out on the lodge's sprawling desk as the day's warmth ebbs off. Perhaps you'll earn your meal with a particularly stubborn, but ultimately delicious begger's chicken? Darren, the lodge's chef, was the former executive at Darwin's Parliament House and brings a new-found sense of innovative and culinary challenge that means the local bush tucker is never served al cliché.

Aboriginal bush tucker is one of the many topics discussed during the regular outings – from airboats through to the rugged little Toyota cutaway 4x4 which tumbles and grumbles through the bush like a machanical water buffalo, guests see the true life of the station and learn about their newly adopted surrounds. Guests take turns to pluck the bulbus green business end of a native ant, under our guide's attentive stare, and taste it's limy zest, the ancient equivilent of the lime after the tequila shot I'm guessing. Learn how to smoke fish in bark and which berries spell certain death - real boy scout stuff and guests absolutely love it! 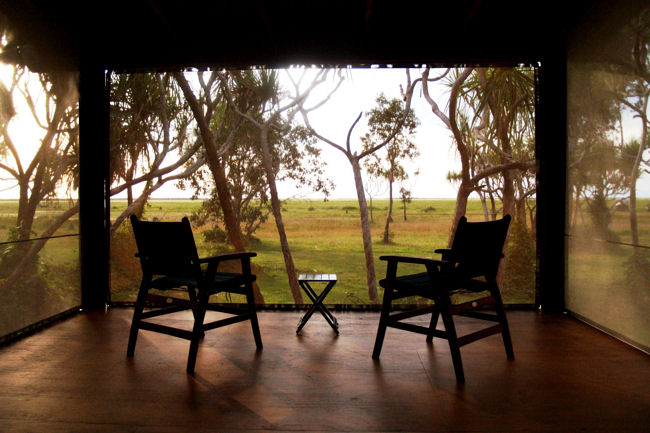 The two days at Bamurru drift past far too quickly and it's morning as guests climb aboard a dusty "troopi" for the road back to Darwin – I leave like so many of Bamurru's guests, with a better understanding of stunningly beautiful land and the harsh realities of the top end, and a definate preference for cocktail hours with a Noah's procession.

How to Get There: Virgin Atlantic and Cathay Pacific both have regular flights to Sydney, Australia. Qantas and Virgin Blue operate the 'red eye' flights to Darwin.

What to Take: Although everything you could wish for is provided, dress for hot days and cool nights and plenty of sun.

When to Travel: May sees the beginning of the best time to travel, with cooler temperatures but with most of the monsoon rains past.