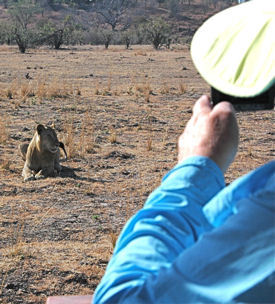 Our lifelong dream to view exotic animals in their natural habitat begins with a visit to the swank, new A & K office inside Harrods London where we sit down to discuss our options. We learn that small, landlocked Zambia lies directly north of Botswana (setting of the much beloved Number One Ladies Detective Agency series). And it offers a private, authentic safari experience with an emphasis on comfort. "Most of the time on an itinerary going from point to point, we put only four to six people in a 4x4 vehicle," we were told. Pictures reveal behemoth sport vehicles with a roof but open sides for maximum viewing and photographing. We were assured that "the game viewing is fantastic."

Our journey began with an international flight to Johannesburg, South Africa, a second flight to Livingston, Zambia and finally an eight-seater to the graveled landing strip at Jeki. Yes, it takes effort to get here, but when the blacktop runs out, the plane continues to taxi on packed gravel, we know we've found a remote spot. As one fellow "camper" put it: "the smaller the plane, the better the place you're going."

The hour-plus ride in a four-wheel-drive from Jeki to the riverfront camp at Sussi & Chuma takes us three times as long because we can't resist stopping each time zebras, impalas or baboons come into view. When we finally arrive, our orientation begins in the open dining area, situated alongside the Zambezi River. Immediately we spot half dozen hippos lounging on the facing shore. Mesmerized by the pod of hippos so close, we can hardly pay attention to the tour of camp ... until we get a look at our "treehouse" accommodations – luxury cottages with soaking tubs and romantic four-poster beds draped in netting. The huts are connected by raised, wooden walkways, which have to occasionally be replaced when determined elephants walk through them.

Each camp is all-inclusive, with complementary wines and cocktails. No one goes hungry or thirsty during his or her stay! Before dinner, Junior Mweemba, our personal guide, offers us a river cruise as our first "sundowner." This A & K event, naturally scheduled around the sunset, involves snacks, beverages and an appropriate toast. Some sundowner variation takes place each evening at every A & K Nambian camp. On our introductory sundowner, we spot our first elephant, waterbuck (similar to an elk), and crocodile (no one dares swim in the rivers here because the crocs are everywhere). We also get our first up-close look at a hippo. When the evening comes to a close, we were escorted back to our room and given an emergency whistle in case the wild comes a bit close for comfort!

The next morning as we stroll the walkway on our way to breakfast, we're entertained by the vervet monkeys in the trees. It appears that the wildlife is interested in observing us as well as vice versa! A day safari from this first camp also provides new sightings of speedy, graceful impala and a giraffe less than five yards from our vehicle. Our guide, Ellijah is an amazing source of information. We learn about the habits of waterbucks, wart hogs and the chacma baboon and such tidbits as the fact that no two zebras have identical stripes. We quickly try to recall all the characters from "The Lion King" to compare them to their real-life counterparts.

The rhino is a difficult animal to spot, as they are in short supply in Zambia. Thousands of them once roamed here, but poachers killed them for their horns, rumored to be an aphrodisiac. Our next day takes us to the Mosi-oa-Tunya National Park in Livingstone where we meet up with park rangers carrying rifles. We are thrilled that they are able to escort us into brush where four white rhinos are grazing. This, Zambia's smallest national park at 66 square kilometers, may be your best chance to see rhinos since the park's five white rhinos (they're actually gray in color) are guarded for their protection.

Another highlight here as well is the chance to visit Victoria Falls, one of the seven natural wonders of the world. Bordering Zambia and Zimbabwe, it claims to be the world's largest waterfall (though not the tallest or widest) because at 5,600 feet wide and 360 feet tall, it forms the largest sheet of falling water in the world. Impressive.

Our accommodations for the next two nights are at the uber-remote Zambezi Kulefu Camp alongside the mighty Lower Zambezi River. No cell phone towers exist and electricity comes via generator. Because we choose to take a slow, photo-op filled, three-hour transfer with the ever-helpful Elijah as our guide, we arrive after dark. It's especially exciting to hear (but not see) the low moans of the many hippos out there in the Lower Zambezi as we enjoy a three-course dinner with fine wine. Our fellow campmates, a couple from Australia, and an American mother-daughter pair, head out on a night safari, and upon return, excitedly report seeing a leopard stalk her prey. Later, deep in the night, we hear our first lion roar and what we mistake as a human scream. Turns out to be a baboon.

The Zambezi Kulefu Camp consists of seven tents that accommodate 18 guests in unparalleled luxury considering the locale. "What's the secret to the magic?" we ask. "It's the place. It's the animals. It's still unspoiled," is the reply from the camp's assistant manager Simeon Josia. The next day as we enjoy a white tablecloth luncheon outdoors beside the Lower Zambezi following a morning of fishing for tiger fish, a relative of the piranha. We smile and recall his answer as a line of elephants swim across the river.

Our final stop is the Puku Ridge Camp in South Luangwa. Transport involves a short flight to Mfuwe and then a drive to the luxury tent camp. One goal on our bucket list for this trip is to spot all of the Big Five animals, so named by big-game hunters as the most difficult to hunt on foot, and some say, the most dangerous. Of the five, the rhinoceros, African elephant, cape buffalo, lion and leopard, we have yet to see the last two. Our guide, Keennan Tholex, who's been in the business over 20 years makes it his mission for help us with these final two sightings.

On our last day in camp, after a full day of safari and a night drive, and mere hours before our plane was scheduled to depart, Keennan locates both. The male lion has an injured paw but is still a stately sight, and again, only feet from the vehicle. The leopard – fondly nicknamed Alice – was resting up in a tree, so well camouflaged with her spots and amid the foliage, that we would never have seen her without him. We understand why Zambia's president asks for Keennan as his own guide whenever he's in town.

In fact, Puku Ridge shares its site with a former president's personal bush lodge, which is now part of Sanctuary Retreats: Chichele Presidential Lodge. We take a quick tour of this huge, colonial-style retreat. It feels like a throwback with arched entrance, huge great room with wrap-around bar in one corner, and whitewash cottage villas. It sports one of the best views in the area with private terrace high above the valley below. And, plans are under way to add a spa as part of current renovations.

This part of Zambia is where the walking safari originated, and guide Keennan is one of the leaders in that field. Walking is the best way, incidentally, to spot the Little Five: The Buffalo Weaver, Elephant Shrew, Leopard Tortoise, Ant Lion and Rhino Beetle.

Since we did not check all those off our list, lucky us: We'll simply have to return ... with pleasure.

Sanctuary Retreats are a collection of luxury travel portfolios from lodges and camps, in Zambia and beyond, to villas and cruises: www.sanctuaryretreats.com

A spokesman says guests typically travel a Zambia circuit, enjoying 2-3 nights at each camp for a river experience, a highlands experience and maximum game viewing. To plan a stay, he suggests, "10 days would be good." For more on Zambia and its 19 national parks, visit www.zambiatourism.com

Livingstone, home of the Victoria Falls, is also serviced by direct flights from O.R. Tambo International Airport. To reach some lodges and camps, there are charter and scheduled flights from both Lusaka and Livingstone. And since these lodges are located in pristine and often remote locations, flying is the recommended mode of transport.

©2009 Luxury Travel Magazine. By J.S. Fletcher and Kathy M. Newbern. Award-winning freelance travel journalists, Fletcher and Newbern often incorporate their romantic travels into their other business, www.yournovel.com, where they put you and your sweetie in your own personalized romance novel "wild" or "mild." They are also the creators of the award-winning travel blog/podcast/radio report, YourSpaReport.com.
Like Us
Facebook
Follow Us
Twitter
Follow us
Instagram