Adventures in Siam...Bangkok and Chiang Mai 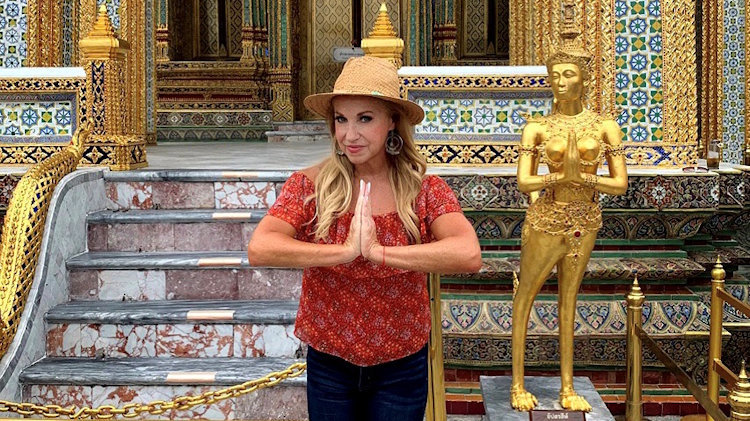 As a Travel TV Host for my show Travel Time with Linda I am blessed to see many beautiful places around the world, fulfilling my love and purpose to experience different cultures and their way of life.

In all my journeys, no other country has had a greater impact on me than Thailand which is not only a region, but a culture with a high regard for "jai dee" meaning Thai for "good heart"; an ethos that is infused into everything they do.

Hard to believe through most of its history, the country known as Thailand was called Siam less than 100 years ago.  After its reform in 1939 this wondrous Southeast Asian “Land of the Free” nation is brimming with bucket-list worthy adventure.

From opulent royal palaces, ancient ruins and ornate temples displaying figures of Buddha, to soothing traditional Thai massage therapies, there is no shortage of magical fabulosity to encounter.

Our first class travels expertly navigated by luxury travel company Exotic Voyages, who truly know how to deliver curated, private tours throughout destinations in Asia.  We met our Tour Guide Peek in the hotel lobby early our first day in Bangkok to begin a full day of tailor-made adventure exploring the capital city of must-see historical and cultural attractions starting with temple hopping the Grand Palace, Wat Arun and Wat Pho, taught to enter each building leading with the left leg as a sign of “Good Luck”.

After a delicious lunch of Shrimp Pad See Ew and a Thai-Style Omelet with Crabmeat, we hopped aboard a long-tail boat from the Chang Pier to take a private tour along the Khlong Bangkok Noi to discover the traditional life along the canals.

Lined with varied architecture on both banks of the river, including traditional houses on stilts, mosques, royal residences, old mansions, embassies, and old European trading houses, among modem high rises, we ended our tour to feed the fish at Khlong Mon. 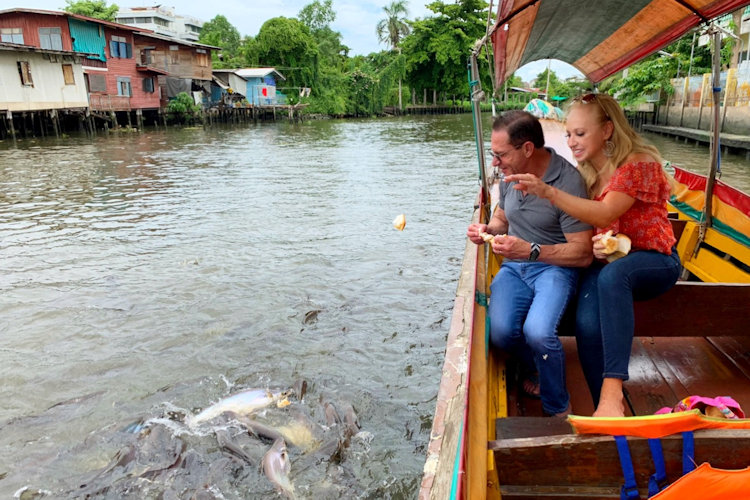 Bangkok, formerly known as the “Venice of the East”, as the city used to be crisscrossed by an advanced network of canals for a peek into the unique blend of the Capital’s split personalities, as a modem cosmopolitan city and the watery Bangkok of yesteryear.

By night, we rode through the city on a wild tuk-tuk ride exploring the hustling bustling Flower Market with row after row of exquisite floral offerings and sampling delicious Thai street food. 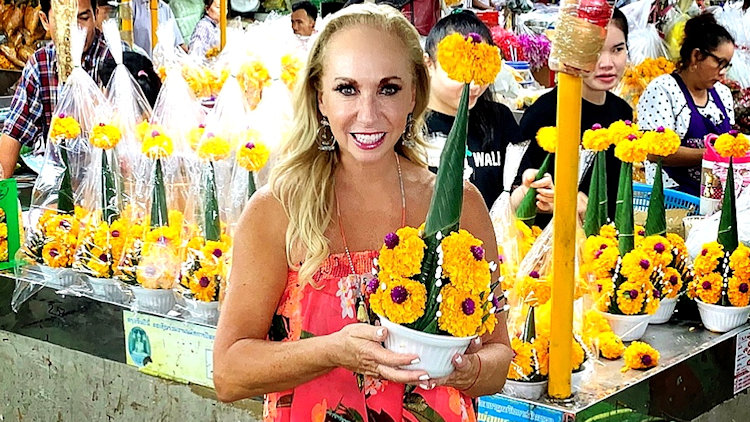 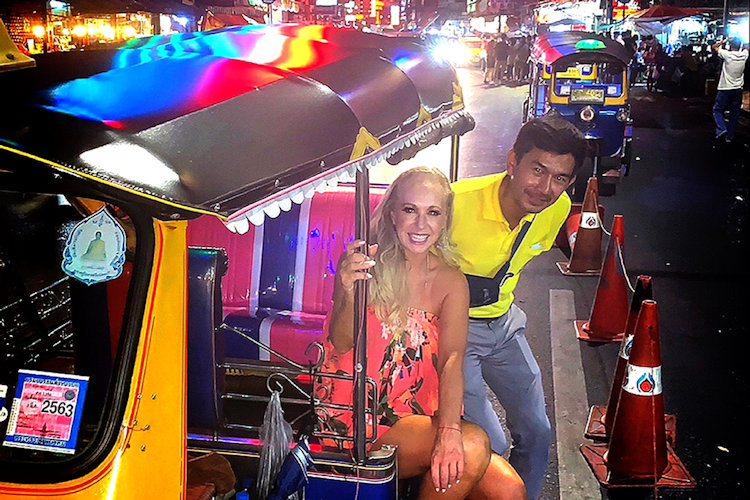 We returned at the stroke of midnight on our magic Tuk-Tuk, savoring our whirlwind adventures of the day to our stunning urban sanctuary; the luxurious boutique hotel The Siam. 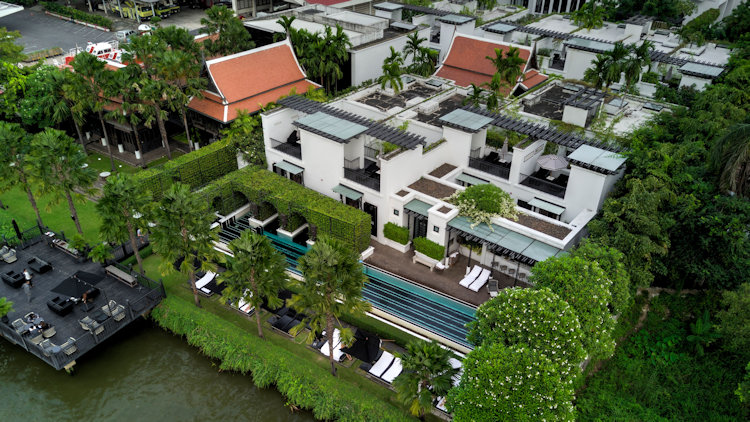 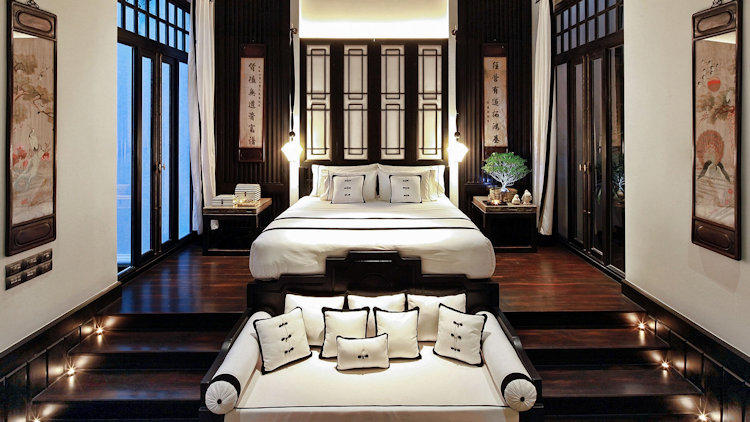 Our spacious Siam Suite outfitted with plush art deco furnishings, a super-sized king bed and lofty ceiling with original turn of the century artworks and antiquities.

While shown to our Siam Suite by our personal butler, we walked through the lush atrium passing by the Opium Spa & Wellness Center and told discreetly that the Princess is often a regular guest of the establishment and they were preparing for her royal arrival later the next day.  Mentioning my hope for a brush with royalty, I was immediately told that would be impossible as any area of the hotel the Princess occupies is blocked off to guests, so unfortunately no royal encounters to report. 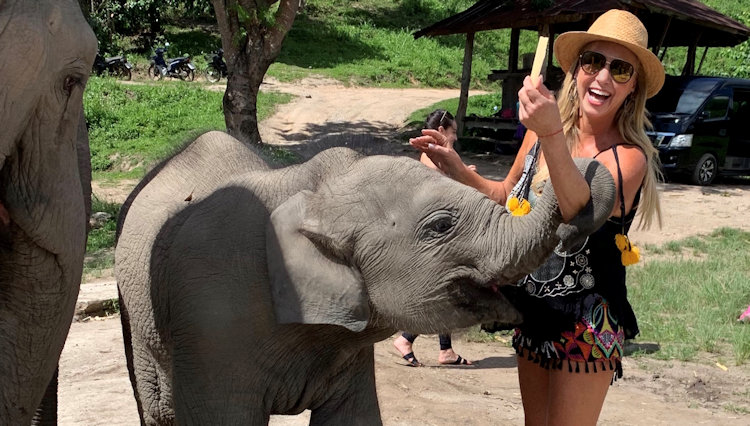 A short one-hour flight from Bangkok to Thailand’s Northern Region, we arrived the next day in Chiang Mai for a serene escape shrouded in nature.  I checked off another bucket list thing-to-do organized by Exotic Voyages to participate in the unique “Elephant Owner for a Day” program at Patara Elephant Farm. If you are coming from Singapore, you can find a Singapore to Chiang Mai flight here. 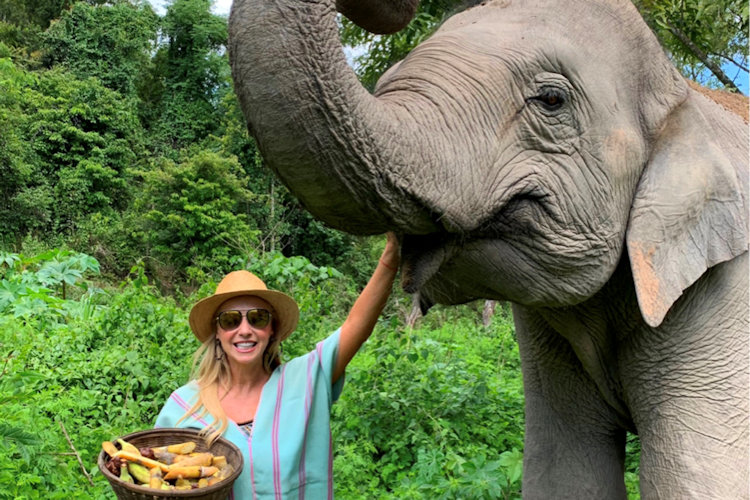 It was so incredible spending the day with these gentle giants feeding them, learning about their skin and how to bathe them and the spoken commands how to communicate and ride them.

Mommy and especially Baby pictured above were my absolute favorites to hang out with at socializing hour.

Soon I was assigned my Elephant “Ploy” to “own for the day” along with my Trainer “Ew”, who taught me several key phrases. “Dee Dee” which means “Good Girl”, “Na Lo” to lie down, “Ma” to come and most important during the riding portion; “How” to stop.

Our haven of tranquility, 137 Pillars House was our tropical oasis in Chiang Mai.  A beautiful boutique hotel where the elegance of the Orient meets modern luxury built lovingly around “The House”; a teak wood building namesake carefully restored to reflect its 19th Century origins. 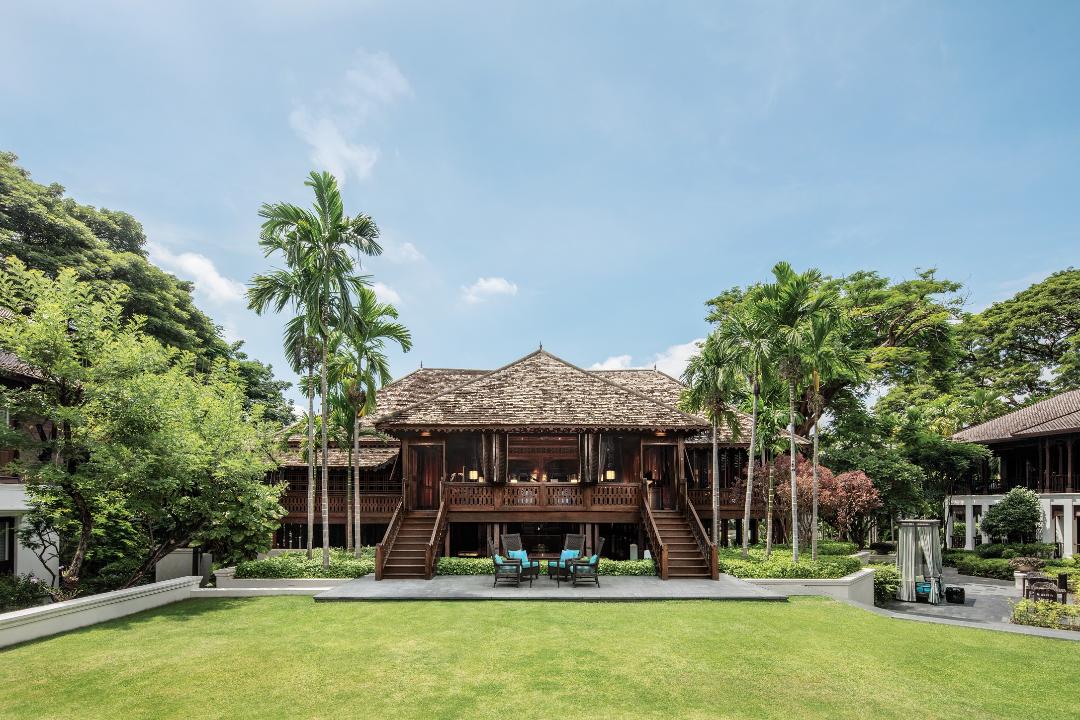 In Chiang Mai, the importance and wealth of a property owner was often measured by the size of their Lanna-style Thai houses, and in particular how many pillars (sao) the house had…the more the pillars, the more important.

Jack Bain, the property owner at the time decided to count the number of pillars which numbered the impressive amount of 137. An old map of the Wate Gate area also referred to house as “Baan 137 Sao”, which translates to 137 Pillars House, thus, the house came to be known as 137 Pillars House. 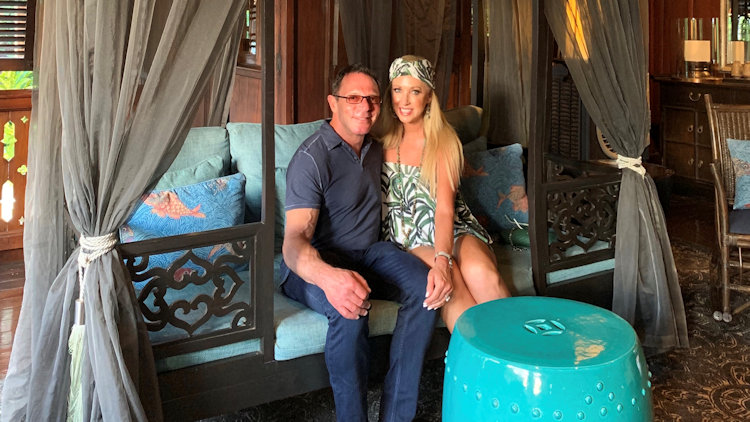 Jack Bain’s legend lives large in the old house as we ended our adventures each day enjoying handcrafted ‘Old World’ contemporary cocktails and on one particularly exhausting day shopping Nimman Road; the heart of the trendiest part of Chiang Mai, we rewarded ourselves with a delectable Afternoon Tea in the spirit of the Orient with wonderful offerings of Chai Dim Tea selections paired with savory and sweet delights. 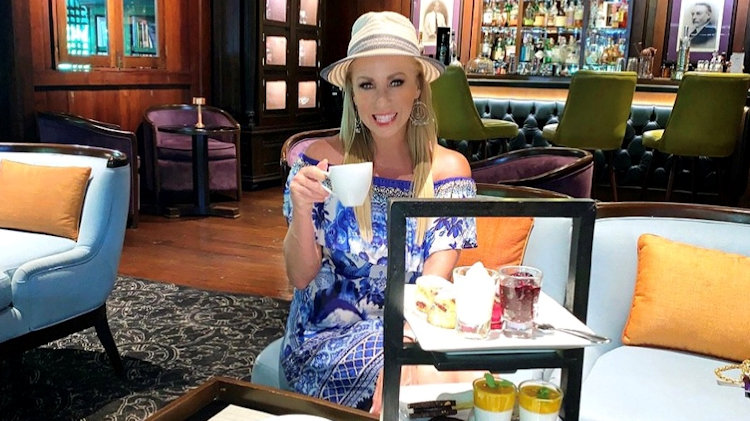 After exploring the rich cultural heritage of this former Lanna Kingdom we retreated each day in style to our expansive bedroom suite with its lush garden terrace overlooking our private jungle oasis; completely smitten with the magical “Land of Smiles” and basking in its Thai hospitality "jai dee". 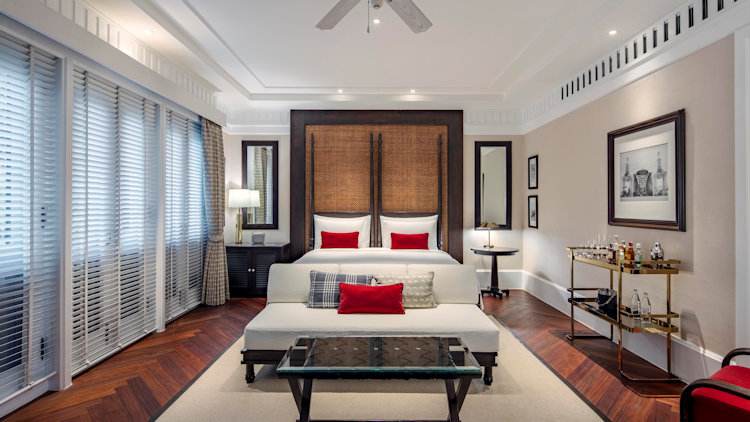 Linda Cooper is an award-winning TV Host, Producer and Writer serving as a brand ambassador to worldwide travel on her national luxury lifestyle series “Travel Time with Linda” and as a contributor to several luxury lifestyle and travel publications. Her specialties in television and in lifestyle publications include the travel; lifestyle; luxury; tourism; hotels; restaurants; food/wine; fitness; spas; and retail shopping industries. 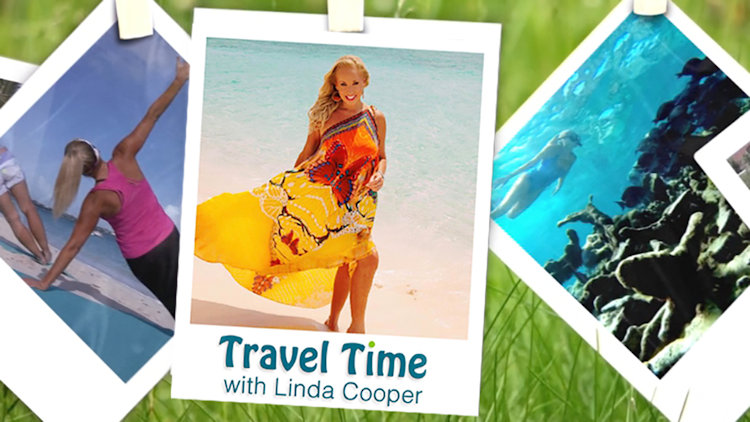