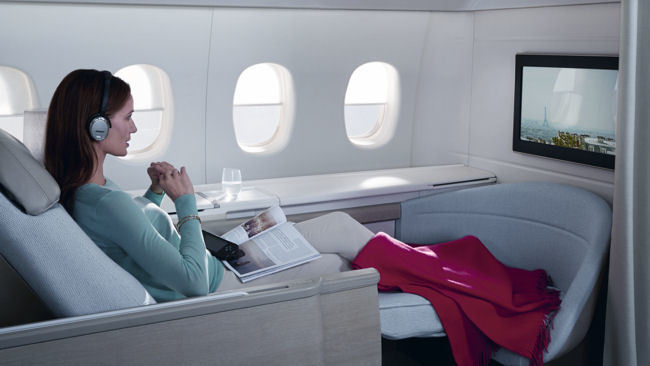 The updated plane features newly redesigned seats in Business, Premium Economy, and Economy classes. These new seats have already made their debut with a number of different long-haul destinations across the world, including three in the United States: New York, Los Angeles, and Washington, D.C.

*Due to the Daylight Saving Time difference between Paris and Boston, between October 25 and November 1, the flight will depart Boston at 9:10 p.m.

**Due to the Daylight Saving Time difference between Paris and Boston, between October 25 and November 1, the flight back from CDG will land in Boston at 7:10 p.m.

Currently, 20 destinations are being served with Air France's new long-haul cabins, including:

In June 2014, Air France unveiled the first Boeing 777 equipped with the new long-haul cabin classes as part of a $500 million investment in new products and services. One year later, the airline is seeing the rewards of its efforts with a significant increase in its customer satisfaction ratings. This enthusiasm has contributed to a 28-point increase in the Net Promoter Score (NPS), a popular rating index which has received a high response from customers asked whether they would recommend Air France to their families, friends and colleagues.

Air France Business: A Cocoon In The Sky

In the new Air France Business class, the seat adapts to the shape of each individual, from seating position to a real 2-meter-long bed. The seat's soft foam is designed to offer impeccable comfort. With a soft duvet and XXL-sized feather down pillow, everything has been designed to ensure peaceful sleep above the clouds.

Each passenger has a 16-inch (41 cm) HD touch screen with access to a wide range of programming. A touch screen handset can be used to navigate through programs or to make phone calls, and a set of noise-reducing headphones allows for comforting privacy. Further enriching the flight experience, Air France provides all Business passengers with an elegant Business comfort kit, which includes a Clarins moisturizer, lip balm, and numerous beauty products.

In Economy, there is a new fully-revised seat, with more legroom, a new seat cushion, more comfortable headrests, and a wider tray table. The seat has been ergonomically-redesigned to guarantee optimum comfort, and it features new functionalities, including an electric socket and headphones holder.
In Premium Economy, more comfortable seat cushions and a multi-position footrest further enhance this cabin class, first launched in 2009. The unique, entirely separate cabin is a dedicated class of service offering 40% more personal space for a great value.

As for entertainment, choosing a program has never been as quick and easy, with wide touch screens with HD images.

The meal service has also been upgraded, with a second hot dish and new gourmet offer, to make the trip even more pleasant and enjoyable. Families and particularly children are at the heart of Air France's attention. Organic produce adapted to the tastes of infants and young children, new tableware, and a selection of new games ensure children will enjoy the flight in a fun way.
Air France will have installed close to 10,000 Economy seats and 1,100 Premium Economy seats on 44 Boeing 777 aircraft by July 2016.