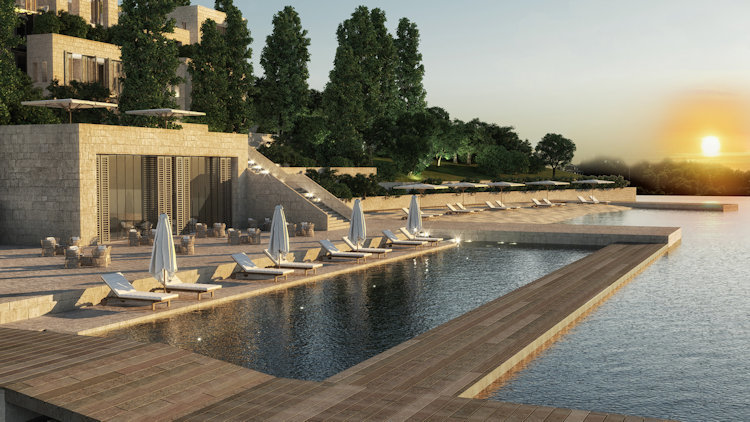 The far southwestern corner of Croatia is preparing for a boom in a very particular type of tourism, with the arrival of a new hotel from the world’s leading luxury hospitality brand. But what can the town expect when Aman Cavtat opens its doors?

The sleepy fishing town of Cavtat on Croatia’s Adriatic coast is often overlooked in place of its better known neighbor, Dubrovnik. However, those in the know flock to Cavtat for its stunning beaches, tree-lined harbor and ancient Illyrian necropolises dotted around the area.

The town has always had a special appeal to history fans because of Rector’s Palace, a Renaissance mansion that displays the manuscript collection of 19th-century scientist Baltazar Bogišić, and the impressively baroque St. Nicholas Church.

In the coming years, tourists will have another reason to visit Cavtat – the opening of a new outpost of the Aman Resorts group. Known for operating some of the most luxurious, exclusive hotels in the world, Aman will commence work on the hotel at the end of the year following a EUR 50 million investment from Greek businessman Petros Stathis.

Stathis is a well-known name in the luxury hospitality industry, also owning and operating the five-star Aman Sveti Stefan in Montenegro and Aman Grand Canal in Venice.

“A recent report found the Croatian coast to be the second most popular destination in the European Union for international travelers, but much of this is accounted for by low cost, mass tourism,” comments Stathis. “While this model can generate a lot of revenue for local economies, more often than not it chips away at the heritage and culture that attracted visitors in the first place.”

Stathis has a passion for restoring and developing high-end resorts than exist in harmony with the local environment. Aman Sveti Stefan is built on the existing foundation of a medieval village and was opened in 2011 after painstaking restoration by Stathis’s team. His Venice hotel is housed in the majestic 16th-century Palazzo Papadopoli, expertly combining contemporary luxury with perfectly preserved heritage throughout its grand suites and reception-rooms.

Aman Cavtat will be built on the site of the former Hotel Macedonia and is expected to set a new standard for excellence in hotel design for Croatia. The design represents a synthesis of architectural styles, working with the grandeur of the landscape and built with local materials.

Stathis’s vision is for the hotel to act as a huge observatory, framing a panoramic vista of the city of Dubrovnik, with the terrace of each suite providing a unique view of Cavtat’s bay and of the Adriatic coastline.

The project will create hundreds of jobs in the community, which Stathis hopes will act as a stimulus for the local economy in the same way his Montenegrin hotel did for the areas surrounding Sveti Stefan.

“Our objective for Croatia is the same as every other country where we have built and invested – to create the very pinnacle of refinement and to leave a lasting, positive legacy of which the country can be proud,” he says.

Croatia has recorded the second highest tourism growth in the last decade with a 130% rise in overnight stays, second only to the Canary Islands. It is Stathis’s hope that Aman Cavtat will kick-start a renewed growth in the luxury sector of the country’s tourism industry in the same way Aman Sveti Stefan has in Montenegro.

Since the re-opening of Sveti Stefan, the luxury tourism market in Montenegro has grown exponentially, earning comparisons with Monaco and the French Riviera. The World Travel and Tourism Council has predicted that Montenegro will receive EUR 10 billion in investment over the next decade, with 36%, or EUR 1.9 billion, of GDP coming from the tourism economy by 2021, rising from 17% in 2017.

Major projects such as Porto Montenegro have followed Sveti Stefan’s lead, offering a yacht and superyacht marina with 850 berths, a five-star hotel and shopping village, luxury villas, a helipad and a museum. The estimated investment to date in Porto Montenegro alone amounts to over EUR 450 million, providing a huge stimulus for the local economy.

“With Aman Cavtat we are applying all the lessons we learned with Aman Sveti Stefan about how to ensure the success of our hotel goes hand in hand with growth in the local economy,” he says.

“It is Cavtat’s time to shine brighter on the world stage and we want to play a key part in that story.”