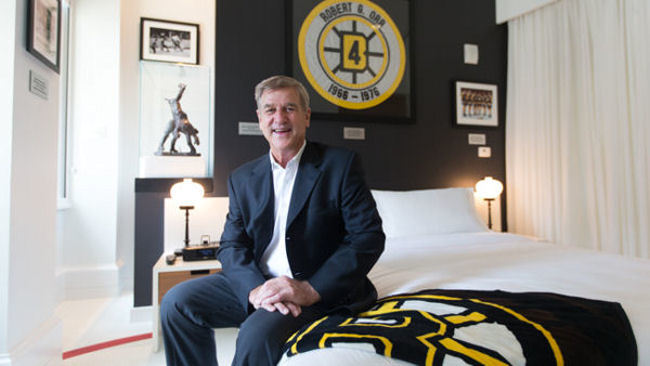 Designed by Boston-based architecture and interior design firm, Bergmeyer Associates, Inc., the Bobby Orr Suite boasts numerous features, including personal memorabilia of Orr’s, which is guaranteed to transport guests’ rink side and help them relive the magical moments shared by Bobby and the Boston Bruins throughout his career. Upon exiting the elevator on the 14th floor, guests will be immediately immersed into a hockey state of mind as the doors open to reveal a ‘golden skate’ hologram embedded into the floor-length hallway mirror. A sign with the words ‘Bobby Orr Way,’ and a gallery of framed photos featuring images of Bobby Orr with coaches and players that were taken during his professional career, all provided by The Sports Museum at Boston’s TD Garden, help lead guests to the suite and reaffirm that they’re about to embark on a one-of-a-kind hospitality experience as they approach the door bearing the number “4.”

Upon entry, a black wall with gold and white stripes adorned with inspirational quotes from Bobby leads the way to the living room. Here, guests will find two seats from the original Boston Garden, a replica scoreboard with the time and score halted at the exact moment Orr scored the winning goal during overtime on May 10, 1970, clinching the Stanley Cup for the Boston Bruins, dasher boards with a functioning ‘penalty box,’ and a custom couch and table that evoke the feeling of stadium-style seating. Custom flooring made from woven white vinyl to invoke the look of a rink, complete with face off circles and the blue line, helps bring the NHL experience to life. On one of the living room walls, a graphic of a ticket from Orr’s first game with the Boston Bruins serves as a backdrop for the oversized, mounted flat screen TV. On the opposite wall, the names of every Boston Bruin player Orr ever played with are encased in clear acrylic overlay embedded with hockey netting, which features the famous silhouette of Orr flying across the ice after having scored the winning goal during the 1970 Stanley Cup finals.

“We’re excited to share this new suite with our guests and Bostonians, not only because it’s an incredible tribute to Bobby, one of our greatest athletes and citizens, but also because it’s our way of honoring the Boston Bruins, who mean so much to so many and have made the great city of Boston so proud.” said Trish Berry, general manager of the Ames Boston Hotel. “We are proud to be a Boston hotel that is steeped in and surrounded by history, and it’s an honor to have worked with Bobby to bring this suite to life.”

In the bedroom, Orr’s retired banner from his personal collection hangs above the bed with a collection of hockey sticks from his days on the ice, which shows the evolution of the sticks over the years he played. A wooden locker modeled after those found at the original Boston Garden is located just outside the bathroom, where it houses a replica of Bobby’s skates provided by his museum in Parry Sound, Ontario, Canada, and serves as a closet for the room. In addition to the retired banner, Orr has generously donated many items to the suite from his personal collection, including Prince of Wales trophies, the hockey skate sculpture and ‘Bobby Orr Way’ sign in the hallway, along with many photos signed by former teammates and long-time friends like the late Red Sox great Ted Williams.

“For me, this suite is about celebrating my former teammates, the Boston Bruins, and the city of Boston,” said Orr. “I didn’t grow up thinking one day I’d have a hotel room in my name, that didn’t cross my mind, but I think the Ames did a nice job and the room is perfect for sports and hockey buffs.”

A portion of the proceeds from each guest’s stay in the Bobby Orr Suite at Ames Boston Hotel will go directly to The Bobby Orr Hall of Fame, an interactive sports heritage museum dedicated to preserving and celebrating sport and the career of Bobby Orr, which recognizes, encourages and supports outstanding athletic and community achievements of many citizens in the Parry Sound District.

Last month, the 15-story Ames Boston Hotel completed a $6 million renovation, which, in addition to the new ‘Bobby Orr Suite,’ saw the redesign of the hotel’s public spaces, including the Lobby, The Library, Ames and Oliver & Oakes rooms, and the addition of Cultivar restaurant by acclaimed Chef Mary Dumont.

Constructed in 1893, the 114-room boutique hotel which opened in 2009, is conveniently situated near Boston’s busy Financial District, the Hynes Convention Center in Back Bay, the Boston Convention & Exhibition Center in the innovative Seaport District, and many public transit access points, including “T” stations at Haymarket, State Street, and Government Center. Additionally, Ames Boston Hotel abuts many of the city’s beloved landmarks and old-world neighborhoods, including the Old State House, Faneuil Hall and Beacon Hill.

The historic Ames Boston Hotel, a member of the Curio Collection by Hilton™ and of the Gemstone Collection by BENCHMARK®, a global hospitality company, inspires both modern style and old world sophistication. An experience rich with elegant interpretations, complemented by innovative new design, Ames Boston Hotel offers Bostonians and visitors, alike, a dynamic hospitality experience. Ideally located near historic Faneuil Hall and Beacon Hill, the 114-room hotel boasts an atmosphere that is refined yet playful, a state-of-the art fitness center, and suites accented by dramatic, Romanesque arched windows and original fireplaces. Ames Boston Hotel is located at 1 Court Street and can be reached by calling 617-979-8100 or visiting www.ameshotel.com.