Amsterdam for the Luxury Traveler 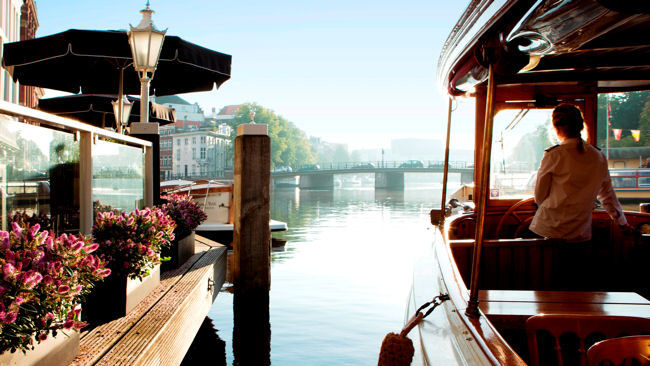 A few minutes to the south, the Rijksmuseum, Van Gogh and Stedelijk Museum Amsterdam in the Museumplein attract visitors who have come to enjoy art from the Dutch Golden Age, the late Nineteenth Century, Twentieth and Twenty First Centuries.

Exploring the city on a bicycle, the preferred Dutch mode of transportation, or on the efficient trams, which criss-cross the city throughout the day and evening, is part of the fun. With tourism thriving, Amsterdam has a great number of quality hotels located throughout the city.

On a recent visit, I stayed in three of Amsterdam’s 5-Star hotels that are unique in their locations and qualities. 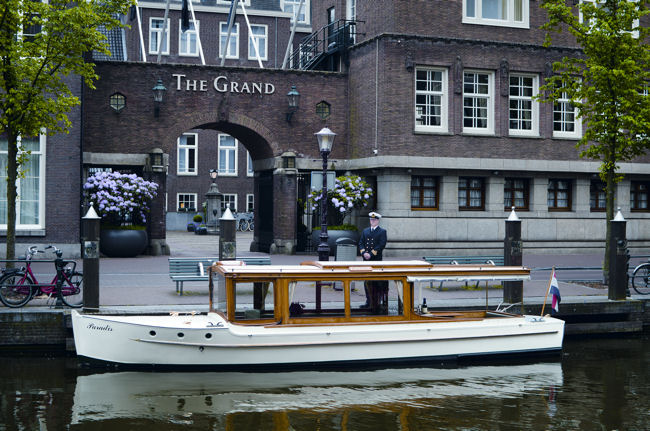 Located close to Dam Square and situated between two canals (Oudezijds Voorburgwal and Oudezijds Achterburgwal), the Hotel Sofitel Legend the Grand Amsterdam has 177 rooms, of which fifty-two are suites with butler service.

Elegance and attentive service are watch words at the Grand. Large vases filled with floral displays brighten the intimate lobby that faces a motor courtyard on one side and an inner patio garden on the other. Two Jaguar sedans are available to guests as are bicycles to explore the city.

Taking a historical tour of the property is not usually on the list of what-I-must-do-in-a-luxury-hotel. But at the Grand you will want to do just that. Make special note of the Marriage Chamber, a gathering room designed for intimate celebrations including anniversaries, birthdays and, of course, weddings. The 1926 murals in the room tell a story of love as imagined in emblematic beauty by the Dutch artist Chris Lebeau.

In the mural, a young man and a woman, cocooned separately to keep them from overeager suitors, are protected until their meeting during which they reveal their love to one another. Panels around the room trace the progress of their life together. They marry and have children. Their children have children. They grow old together. The mural envelops the entire room. The cycle of human life is epitomized in one couple’s deeply romantic love. The room is elegant and powerfully emotional. 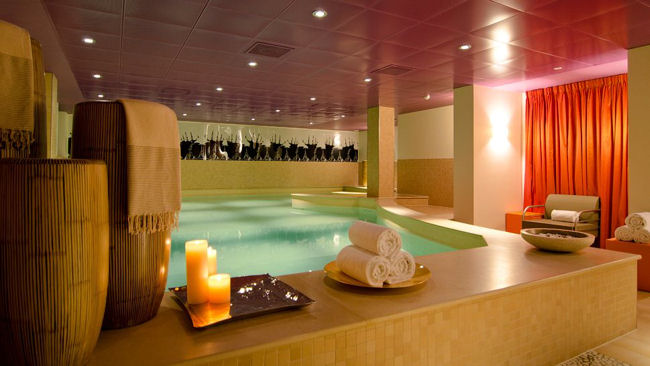 Making effective use of limited space, the Grand Amsterdam has a two-story spa with a co-ed sauna, two treatment rooms, an indoor pool and steam rooms.

Bridges, the hotel’s 1-Star Michelin restaurant, has an open airy feeling, with a floor to ceiling glass wall facing the Oudezijds Voorburgwal canal, the oldest canal in Amsterdam, constructed in the late 14th century.

At the entrance to Bridges there is an arresting painting. “Children Asking,” Karel Appel’s post-WWII abstract painting of children alongside a railroad track, uses strong black lines and patches of primary colors. The décor of the restaurant picks up the mural’s colors and design.

The junior suite where I stayed faced the motor courtyard with a view of the city beyond. Spacious and airy, the room was furnished comfortably with a king sized bed, desk, low couch and easy chair. In the bathroom, a large standing tub occupied the center of the room. With two sinks and separate enclosures for a toilet and a shower, the room was designed for couples who want luxury and pampering and yet also want to keep out of one another’s way.

The Gold Key concierge desk is a source of recommendations the better to experience what Amsterdam has to offer in its lively cultural and restaurant scene. When I asked about restaurants, concierge Jonathan Jongebloed described options as varied as one and two star Michelin restaurants and the crowded, noisy scene in De Foodhallen, a food hall with dozens of stalls serving a variety of cuisines as different as quinoa sushi, thin crust pizza, quality burgers and Vietnamese bánh mì sandwiches. 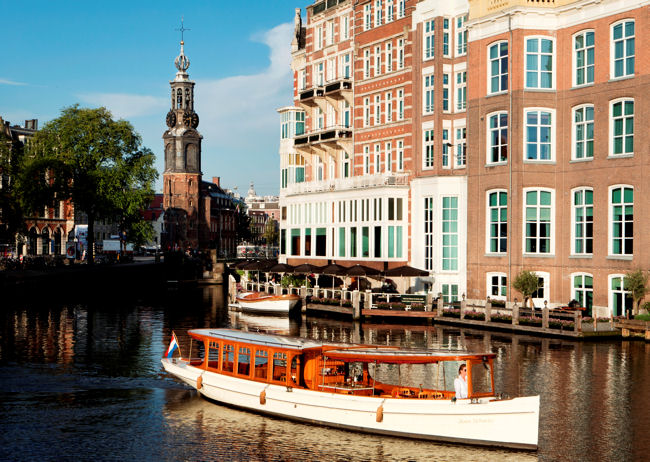 A member of the Leading Hotels of the World, the Hotel de l’Europe is the only hotel owned and operated by Heineken, the well-known Dutch brewery. The 111 rooms and suites are painted colorfully and decorated with reproductions of Old Dutch Masters paintings.

Centrally located near the flower market, halfway between Dam Square and the Museumplein, the hotel is within easy walking and bicycling distance of cafes, museums, art galleries and shops. Any guest who prefers their pleasures taken inside the hotel can luxuriate in the Skins Institute with a full menu of restorative treatments. Therapeutic facials and massages are available to men and women in the spacious, modern spa.

Many of the rooms enjoy views of the Amstel River. My deluxe suite had a balcony that ran the length of the large room. Along with an iPad to use in the room, there was complimentary WiFi, a bottle of water, a dish of wasabi covered peanuts and a small keg of Heineken beer. The keg was definitely a surprise. As welcoming gifts, I have been the beneficiary of half bottles of wine, plates of fresh fruit and small boxes of chocolates. But never a keg of beer. That was definitely a benefit of staying in a hotel owned by a premium beer company.

With a glass of ice cold beer, the bowl of wasabi-peanuts and a comfortable seat on the balcony, I happily enjoyed my own private Happy Hour watching the boats passing by on the bright, wide Amstel River.

That evening since the 2-Michelin Star Bord’Eau was not open, I ate in the Hoofdstad Brasserie, a friendly, casual restaurant serving comfort food from a large menu. Facing the river with a street entrance, Freddie’s Bar and Freddy’s Fumoir reflect the late Freddie Heineken’s love of live music, well-made cocktails, quality cigars and, of course, Heineken beer available in bottles or on tap. As the CEO of the company, Freddie shared his pleasures with the guests and the hotel continues to honor his memory with his photograph placed prominently in the cigar lounge.

In the morning, a complimentary breakfast is served in the Brasserie. Supplementing the buffet, which filled four separate service tables, dishes could be ordered from the kitchen. In addition to smoked salmon, a selection of cheeses and charcuterie, fresh pastries, fruit, yogurt, jams, porridge, granola, fruit juices and desserts, eggs were made to order and served with potatoes, bacon and sausage.

With a view of the river and adjoining Rokin Canal, breakfast in the Brasserie is a good way to begin the day. Light floods through the windows that overlook the Hèt Terras, the hotel’s outdoor patio available in warm weather. For guests wanting a special experience, the hotel can book a canal boat and serve meals on board, catered by the Brasserie. For families and groups of friends on vacation or a couple on a romantic get away, a leisurely ride on the canals with a fine dining, wine paired meal is an exceptionally pleasurable way to experience Amsterdam. 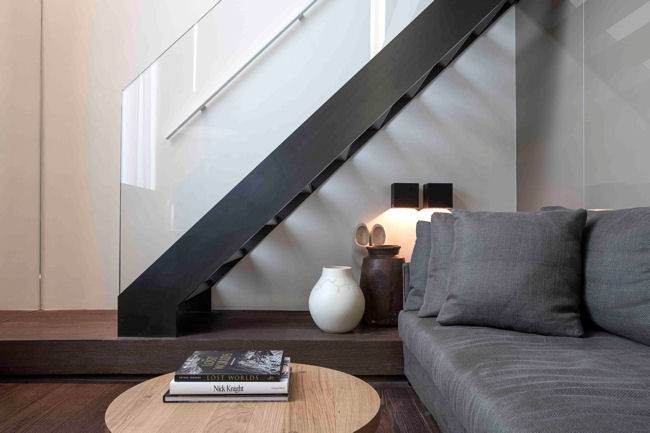 Sleek, minimalist and hip with a contemporary design that borrows from Italian and Asian influences, the Conservatorium Hotel has an enviable location across the street from the Stedelijk Museum Amsterdam in the Museumplein.

The 528 room hotel occupies a building constructed originally as a bank before becoming the Sweelinck Music Conservatorium. Mindful of that dual heritage, the hotel preserved key elements of the bank and conservatorium in the interior design.

Look carefully as you walk to your room to see the bank’s animal tiles--pigs, bees and spiders--preserved along the lower border of the walls. The display area for Kiehl’s products in the Skins Cosmetics store is the bank’s steel lined vault. In the pedestrian entrance on Jan Luijkenstraat, violins hang from the ceiling on slender filaments. The main bar is called Tunes. The music playing in the lobby is an important feature of the hotel. No ordinary muzak, the playlist is curated by the hotel’s creative manager who also chooses the art books and magazines placed in the rooms and the art that decorates the suites and public spaces.

Preserving the work of the Dutch architect Daniel Knuttel’s 1897 building was an important focus of the hotel’s construction. Adding a lobby and a sprawling Brasserie was necessary but instead of covering over the area behind the original building, an atrium was created. The area is framed by glass walls and a ceiling of glass. Even on cloudy days, sunlight floods into the large space.

Overall, the décor is tastefully minimalist. The rooms are furnished in a spare modern style. The color palate favors muted earth tones. Every room is equipped with free WiFi and comes with a variety of high-tech accessories. Delft plates and delicate porcelain tulip vases decorate the rooms as a reminder that this is Holland.

Besides the lobby floor Brasserie and Lounge, the hotel also has Taiko, a contemporary Asian restaurant with an open kitchen and a wall decorated with premium sake bottles. The intimate Tunes Bar is well-known in Amsterdam’s gin and tonic circles as the bar to visit in pursuit of specialty gins. Having curated thirty-four gins from around the world, the knowledgeable bartenders can help guests select a gin with their preferred herbal or citrus notes. 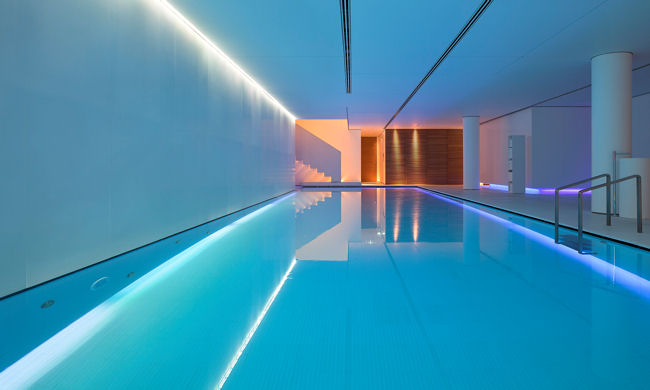 The location of the hotel is ideal for visitors who want to enjoy the pleasures of the Museumplein across the street. Two blocks north of the hotel is Amsterdam’s version of Rodeo Drive. On Pieter Cornelisz Hoofstraat some of the world’s better known retailers offer their wares for sale: Chopard, Cartier, Dolce & Gabbana, Louis Vuitton, Chanel, Mont Blanc, Brunello Cucinelli, Oger Donna, Ralph Lauren, Tiffany and Company and Azzurro Due to name a few.

During the summer and holiday seasons, the hotels are very busy. Reservations by telephone or online are advised well in advance of travel.