They're Back! Amsterdam's Major Museums are Open and Looking Great 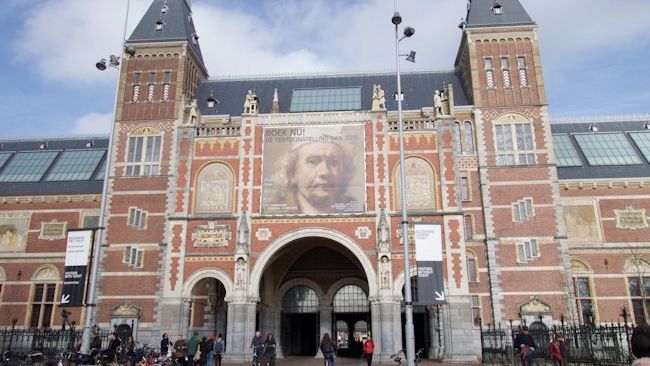 Many people believe the Rijksmuseum is like New York’s Metropolitan Museum of Art, a museum of great, iconic works of art from around the world. In reality, the Rijksmuseum is a national museum. The art on display was either acquired by Dutch collectors, created by Dutch artists or is about important moments in Dutch history. The museum captures the Dutch experience for all to see.

The last time I visited Amsterdam, renovations had closed most of the museum. Visitors entered a side entrance under heavy scaffolding. A darkened, twisting staircase led up to a few galleries that contained a tiny selection of the collection’s prized treasures, including Rembrandt’s “The Night Watch” and Vermeer’s “The Milkmaid.”

Even in such straitened circumstances, the opportunity to experience these master works up close was a delight.

Today visitors enter the Rijksmuseum through a bright and sunny five-story high atrium. A street level bike path and pedestrian walkway divide the museum entrance into a rotunda on one side where tickets can be purchased and on the other where a café on the mezzanine serves light meals, snacks and beverages. Even on cloudy days, the atrium’s high ceiling and glass walls create an airy urban retreat. 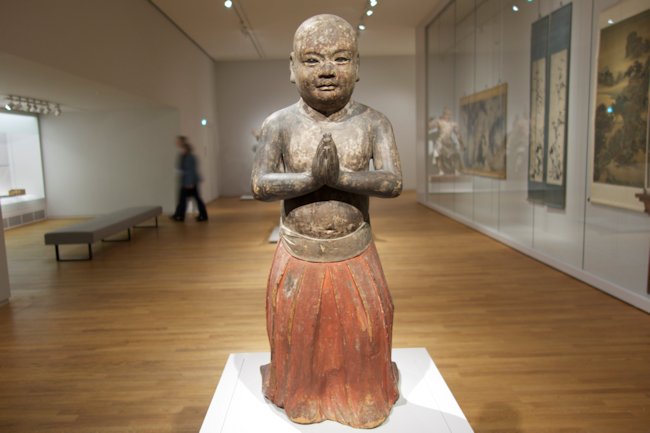 The Rijksmuseum, a 13th century sculpture of the Buddhist Shotoku Taishi as an enlightened child of two. Photograph by David Latt

The very large museum is comprised of many small galleries that create an intimacy between viewer and art object.

When there is a popular show like the Late Rembrandt exhibit, that intimacy can be over whelmed by the many people who want to get up close and personal with the paintings. The solution at those times is to visit the museum late in the day.

Visitors to the Rijksmuseum often focus on the artists from the Dutch Golden Age (1620 to 1680) but the museum is so much more. When you visit, allow yourself a good deal of time, even a full day so you can explore the museum at a leisurely pace. That is when the Rijksmuseum reveals its unexpected pleasures like the 13th century Japanese sculpture of the Buddhist Shotoku Taishi as an enlightened child or Dirck Vellert’s 16th century stained-glass paintings of biblical scenes. 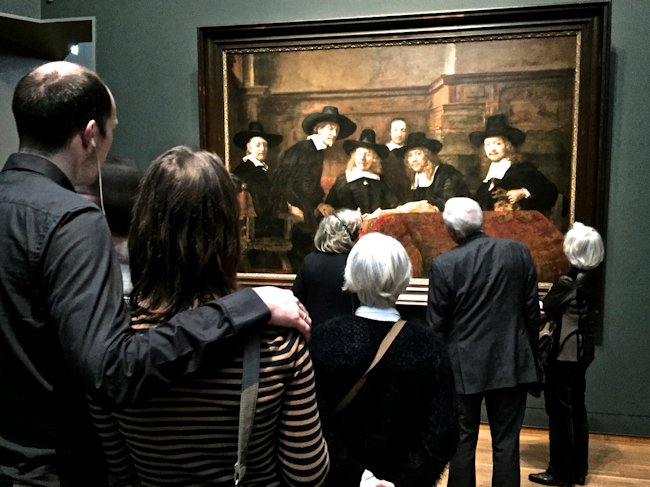 While the Rijksmuseum presents a large canvas with the works of many artists, the Van Gogh Museum focuses on the art, personal history and contemporaries of a single artist, Vincent van Gogh (1853-1890). A popular destination, the collection spreads out across four floors. With an eye to the many students who flock to the collection, a wealth of factual information accompanies each painting.

Given the great number of his paintings in the permanent collection, the museum is able to chronicle the progression of Van Gogh’s life as he refined his technique, responded to new aesthetic influences and struggled with tumultuous emotions. Included in the works on display is the art of his contemporaries, some of whom influenced him, some of whom he influenced.

In his own time, Van Gogh had supporters, not the least of whom was his brother Theo, but his paintings did not gain him the attention he wanted. Even if his “Irises” are beautiful to our modern eyes, Van Gogh could not sell the painting because he depicted some of the irises in the picture as beginning to wilt.

In one way, the museum is like an elaborately annotated personal album. Moving from the “Potato Eaters” (1885) where Van Gogh was imitating the rough realism of Jozef Israël’s “Peasant Family at the Table” (1882) to one of his last paintings, “Wheatfield with Crows” (1890), visitors are witnesses to the progress of an artist’s vision.

The darkness and emotional dread of “Wheatfield” also shows a creative imagination that judged the world a dangerous place.

Van Gogh’s work is organized chronologically. Walking through the collection begins on the first floor with a pleasant café and gift shop. Moving from floor to floor, there is a mix of very memorable works with those, which are more workman-like.

As our guide remarked, had Van Gogh not painted so many masterpieces, some of his work would have been regarded as undistinguished. Given that Van Gogh himself signed only twenty-five percent of the paintings, he would not disagree. Of the seven “Sunflower” paintings, he signed only one.

Seeing paintings like “Sunflowers” up close is a unique experience. We take for granted that his bright yellow flowers should communicate so much emotion, but for Van Gogh’s contemporaries his work was a break from tradition. He embraced the Impressionists’ idea of seeing nature through a personal lens. In the best of his paintings, art and emotion are fused together. 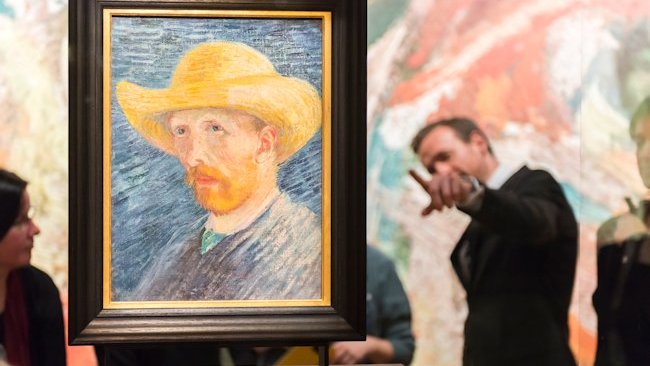 After having experienced his work on the four floors of the museum, an amazing fact hits home. He produced a great body of memorable work, paintings which impact the eye and the emotions. And yet, he painted for only ten years.

Only four years separate the “Potato Eaters” (1885) and the hauntingly beautiful “Starry Night” (1889). There are some paintings which are part of our visual memory. Over the years, I had seen “Starry Night” reproduced in countless posters. Yet, in the Van Gogh Museum, in Amsterdam, here is the real “Starry Night.” Lean in to see the brush strokes and lose yourself in the swirling stars. The trees and hills seem to vibrate as if buffeted by the vortexes above.

From that memorable painting to the end of his life, Van Gogh had only one year left to work before he died.

To better accommodate the great many visitors who currently crowd the sidewalk in front of the museum, a new entrance will be opened in the fall to coincide with the 125th year anniversary of Van Gogh’s death. Facing Vondelpark, the entryway will allow visitors to enjoy Vondelpark as they walk from museum to museum. 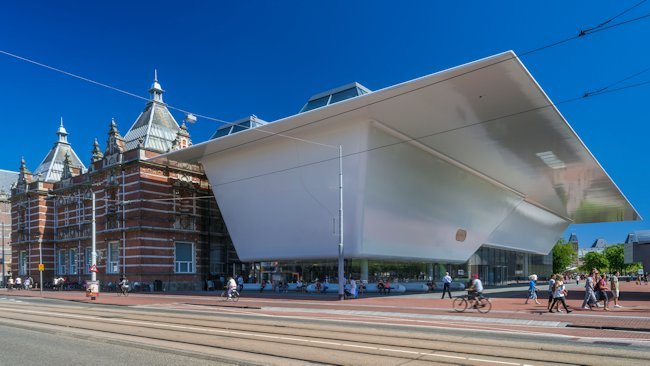 The Stedelijk Museum Amsterdam is next door to the Van Gogh Museum. Like the Rijksmuseum at the other end of Vondelpark, the Stedelijk considers the work of a great many artists. The focus in the Stedelijk is the art and design of the 20th and 21st centuries. The works included in the collection come from every corner of the earth.

Many of the galleries are spacious with high ceilings, allowing for the display of exceptionally large pieces, paintings and sculptures, as well as performance pieces.

When I visited, several of Tino Sehgal’s “live art situations” were being performed. In one gallery, a young woman, her face obscured, lay prone on the wooden floor and slid one way, then another, indifferent to the crowd that had gathered around her. In another gallery, an older museum guard suddenly broke into what appeared to be an impromptu dance. In the next gallery a female guard likewise stood silently and then suddenly sang several bars of an opera. In an adjoining room dominated by Sol LeWitt’s massive “Wall Drawing #1084,” a young man, also dressed as a guard, struck up conversations with visitors about world economic and political issues. The topics he touched on came from Sehgal’s script. 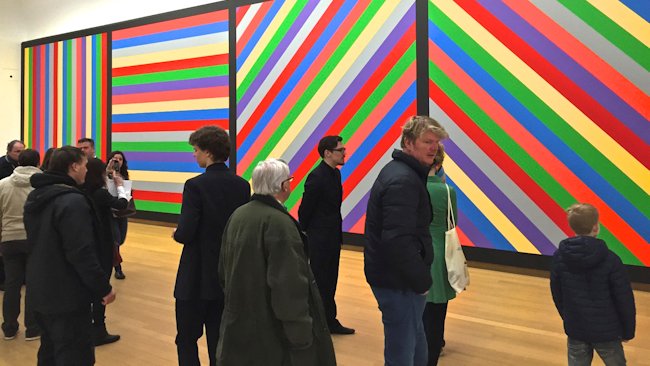 With 90,000 works in the collection, the museum regularly changes what is on display, keeping favorites like works by Matisse, Mondrian and Malevich always available. To keep things lively, the museum also curates special exhibits.

An exceptionally good exhibition, “The Oasis of Matisse,” is on display until August 16, 2015. The exhibit documents the range of Matisse’s work with comparisons to the work of his contemporaries.

The emphasis of “The Oasis” is on his late work when he was preoccupied with using cutouts to create vividly colorful designs, including the very large “The Parakeet and the Mermaid.” Displaying works from the collection and works on loan from other sources adds scale to the exhibition. More than a hundred of Matisse’s works have been installed along with the work of his predecessors and contemporaries. The work of Ernst Ludwig Kirchner, Picasso, Chagall, Van Gogh, Kees van Dongen, Mondrian and Maurice de Vlaminck and others creates a context for Matisse’s ever evolving body of work.

With all of the museums, before you go, it is good to buy tickets online where you can also check the calendar of events to look for the special exhibitions.

Encouraging visitors to spend the day in the Museumplein, as the complex is called, all of the museums have cafes serving beverages and light meals. Rijks, the upscale dining restaurant, at the Rijksmuseum, has an attractive bar and serves a full menu featuring inventive dishes.