An Escape to Zanzibar's Baraza Resort and Spa 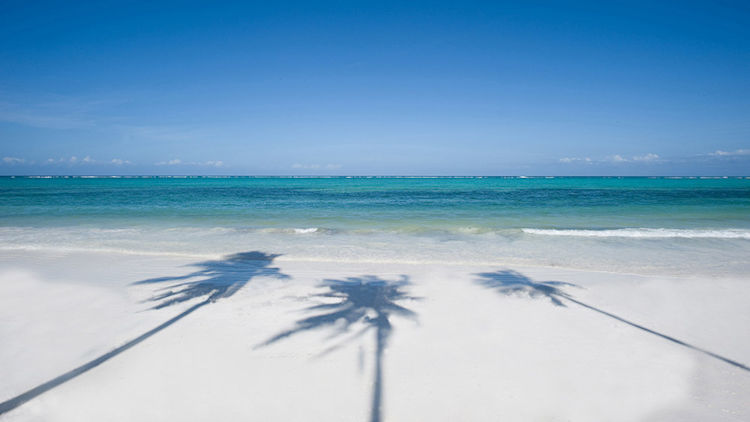 The island of Zanzibar has had a spicy history. Out in the Indian ocean, off the coast of Tanzania, it has for centuries been a key trading post, attracting Arab traders, Portuguese sailors, Persian settlers, British colonists, Bantu people and more, all leaving their influences on everything from architecture to food. The fertile ‘spice island’, famous for it’s cloves, vanilla, ginger, turmeric, cardamom, black pepper and more, has previously been a Portuguese colony, a Sultanate of Oman and a British protectorate, before gaining independence in the mid-1960s.

It’s the long stretches of white sand and warm waters of the Indian Ocean that bring people to Zanzibar more these days than trade, with resorts around the coast. But the island’s history is reflected in the architecture and design of Baraza, a boutique resort of just 30 villas on Bwejuu beach on the island’s south-east coast. It’s one of the hotels in The Zanzibar Collection, a group with a variety of hotels across the island, including neighboring The Palms and, slightly further down the beach, Breezes, each with their own style. 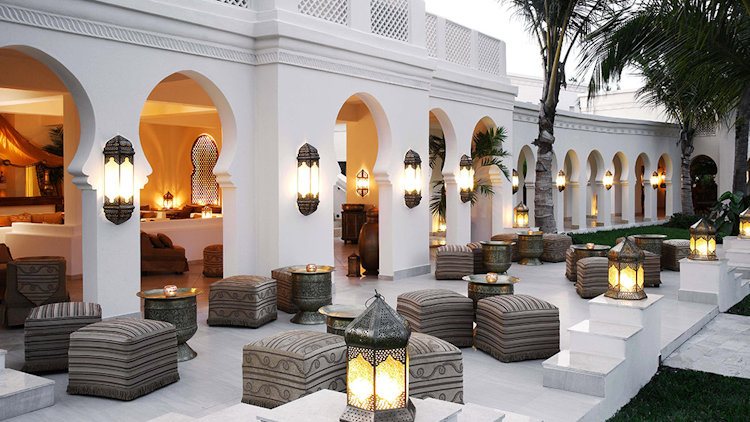 We reach Baraza, an hour and a half’s drive across the island from Zanzibar’s airport, pass through the front gate and drive down through a tunnel of palm trees into the peaceful, green grounds. The buildings are striking and palatial, a mix of Arabic, Swahili and Indian design. The main reception, a light, mainly white construction, has a long corridor framed with neat, curving, symmetrical arches, with running fountains along the way, the floor a pale creamy mosaic. The design, we’re told, aims to represent a palace or home from 400 years ago, when Zanzibar would’ve been part of the Sultanate of Oman, as well as the various influences from international traders and settlers. Along the corridor there are big wooden trunks and carved cabinets, tall-standing teapots, ornate copper trays and lamps along the walls that remind me of the metalwork I’ve seen before in places like Morocco and India. Light yellow curtains match cushions on throne-like armchairs and comfy seating.

Beyond the reception, there’s a large square of greenery, with more tall palms and bushes with bright pink bougainvillea and frangipani flowers, surrounded by the hotel’s restaurants and bars, and a long, brilliant, blue swimming pool, with plenty of loungers and a wall with comfy beds in shaded alcoves. Further still, loungers under the shelter of thatched umbrellas look out onto the beach, which is spectacular, with clear blue water, dark patches of coral, and soft white sand, like baking flour, stretching both ways along the coast as far as we can see. 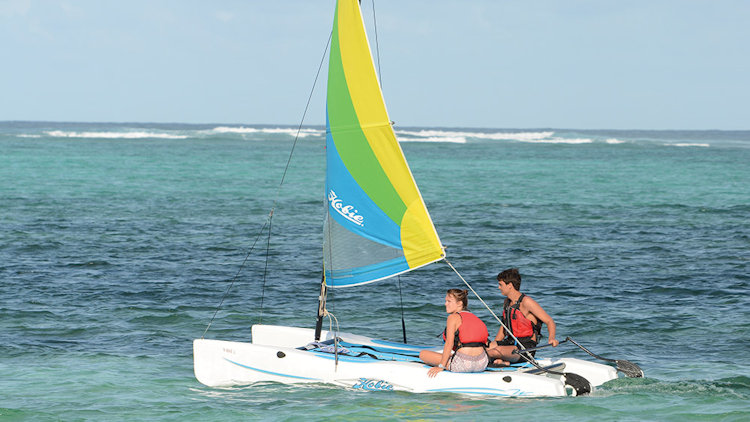 There’s plenty to do here, with a scuba diving center and snorkels at one side of the pool, and kayaks and SUP boards to borrow. But more than anything, this feels like a place to take it easy, to lie back, to read, to swim, all with plenty of breathing space.

Villas are either close to the beach or ‘garden villas’, like ours, set back a short walk away from the front. Inside, the step-back-in-time décor continues, with a regal-feeling mix of soft yellow, white and gold in the lounge area, where there’s a TV and DVD player, and in the bedroom, the rooms also containing a few of the elaborate, evocative metal lamps and decorative trays. There’s an alcove in one corner of the lounge, with ground-level cushions, for taking it easy. Outside, we have a private little garden, surrounded by tall hedges, and a private plunge pool in the corner. 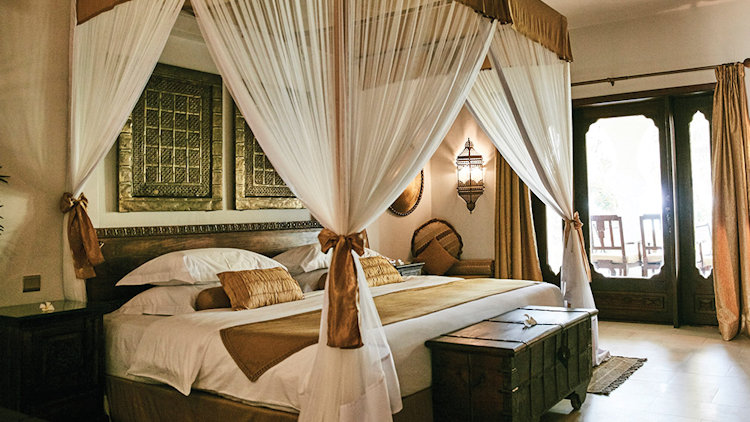 There are two bathrooms, both spacious, the largest of the two with a rainshower, a freestanding bathtub and twin sinks, next to a walk-in dressing area and baggage space.

At night, we eat at the Sultan’s Dining Room, the hotel’s ‘fine dining’ restaurant, a live band playing reggaefied versions of popular songs. We eat little cubes of sesame-crusted tuna, and, for mains, baby lobster or lamb shank.

The hotel has several restaurants, though, and next night we try the Livingstone Restaurant, where it’s ‘Swahili night’, representing the spicy local cuisine. Local musicians and dancers perform outside. There’s a grand buffet in one room, serving delicious creamy coconutty fish curries, potato croquettes, salads, soups, desserts and more, with a large BBQ grill outside with snapper, several varieties of lobster, beef fillets, pumpkin, broccoli and more, as well as a selection of spicy sauces. Baraza is not a place where you’ll go hungry. 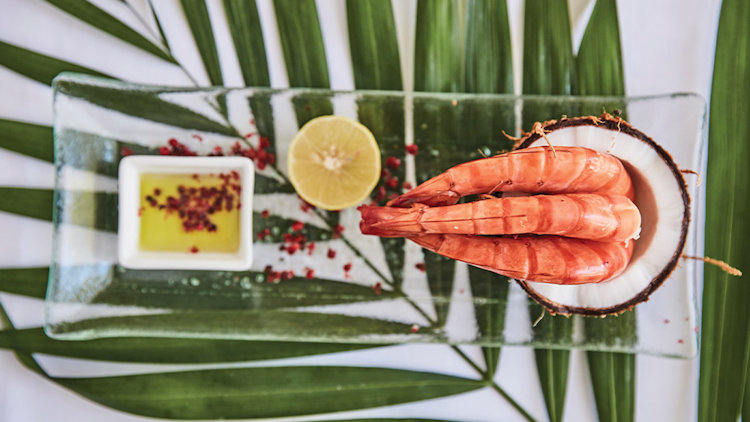 Breakfast is also at the Livingstone Restaurant and again we’re spoiled for choice, with pastries, breads, juices, yogurts, cheeses and cold meats. Fruit in Zanzibar is abundant, with fresh plates laid out here, from watermelon to pineapple. There’s also an omelette station for fresh egg dishes, including Aayan eggs (a scooped out avocado with a poached egg inside).

Lunch is in the Ocean Restaurant, where chefs are on-hand to talk guests through what’s on offer and help serve, from a chilled salad cabinet to comfort food like pizza and breaded shrimp, along with a pasta station for freshly prepared pasta dishes with your choice of ingredients and a separate fish and meat counter, where often there’s a whole grilled giant fish on the counter. Afterwards, there are ice creams and sorbets, fruit, and intricate squares of desserts, from cheesecake to carrot cake, small enough to try more than one.

Not that we’re particularly hungry, but we stop off for Afternoon Tea in the Ocean Lounge, where sandwiches and fresh biscuits are served. We stick to drinks and play a few games of pool, while the white curtains around the building billow gently on the breeze. The rest of the time, we take it easy by the ocean or pool, reading and occasionally taking a cooling dip. 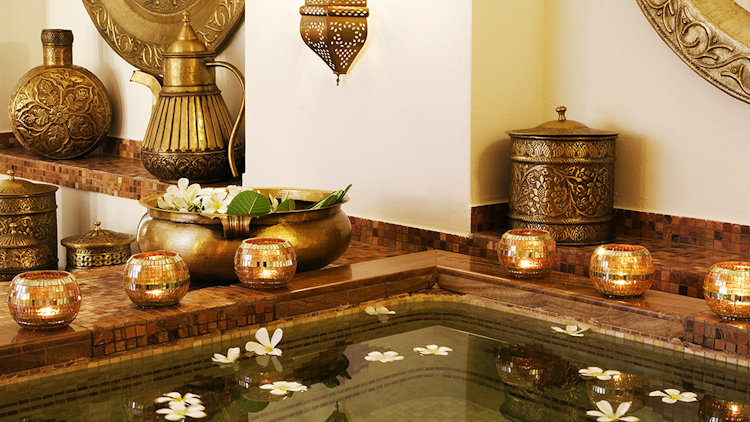 Before leaving, we make time for the Frangipani Spa, which is elegant and quiet, again with the feeling of stepping back in history. There are heavy wooden doors, elaborately carved, the style famous from Zanzibar’s Stone Town, where Queen’s Freddie Mercury previously lived. The corridors have copper-colored mosaic floors with yellow seating alongside, and there are more metal craftworks, bought from India, on the walls, on shelves and in little alcoves. There’s also a separate pool here for anyone who might find the main pool too busy (not that it was busy anytime that we swam there).

There’s a parlor to relax in before and after treatments, a fragranced dimly lit room with orange and yellow lamps, more kettles and vases, sparkling mirrors, and golden-yellow sofas and four poster beds.
My treatment is excellent. As soft flute music plays, a well-trained therapist who really knows what she’s doing worked knots in my shoulders and relieved aches in my back and feet, the room aromatic and calming.

A powerful cup of ginger tea in the parlor afterwards completes the relaxing effect. Here, on the ‘spice island’, the ingredients probably didn’t travel far. 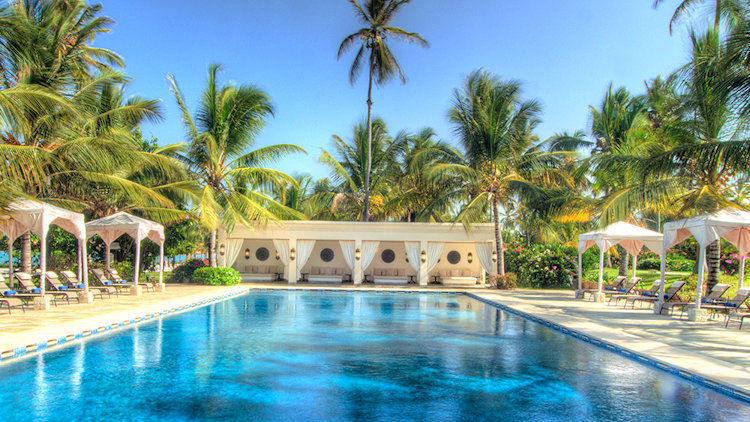