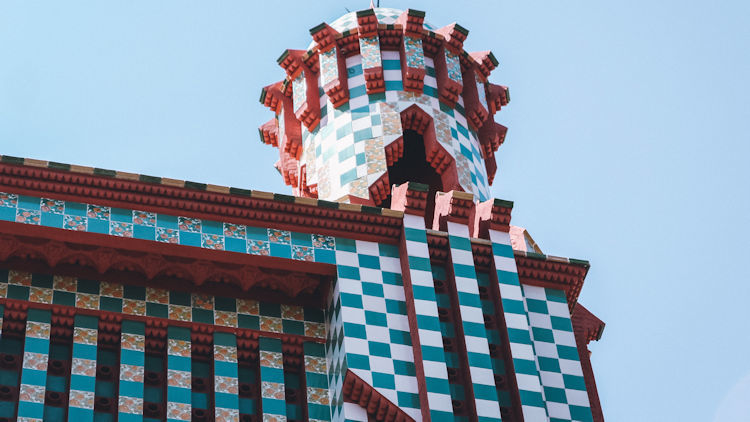 Barcelona is an excellent tourist destination with a rich culture and exquisite architectural works, to mention a few. Whether you are an adrenaline junkie, looking for a relaxed experience, going on a shopping frenzy, or any other needs, there is something for everyone in Barcelona.

If you are an architectural works enthusiast, Spain's Catalonia region capital, known for its outstanding art and architecture, is an ideal tour destination. Experience first-hand the artistic designs by Antoni Gaudí by visiting some of Barcelona's landmarks that have had the pleasure of being declared as Unesco World Heritage. Among the must-visit Gaudi works as you tour the majestic capital include;

Casa Vicens in Gracia was constructed between 1883 and 1885 and was Gaudi's first iconic construction. If you are looking for inspiration, Casa Vicens is a great starting point. This architectural work shows young Gaudi's young mind. You get to experience his first architectural design and see how his though process grew as you explore his other unmatched constructions.

The exterior and interior designs exude a simple yet detailed touch that adds sophistication from the genius architectural minds. You will spot straight lines on the exterior while the interior consists of walls decorated with climbing ivy and ceiling with stucco stalactites while spotting the mosaics floor. While it was inhabited for over 100 years, Andorran bank MoraBanc bought it in 2014. With significant restorations, the new owner turned it into a museum and opened Casa Vicens to the public as of November 2017.

Casa Batllo is yet another Gaudi's masterpiece and among the most popular attraction sites in Barcelona. Located on the iconic Passeig de Gracia, Casa Batllo was built between 1904 and 1906. Casa Batllo offers unmatched experience, with an attic, roof terrace, underground parking level, ground floor, and four above-ground floors.

While you could take a lift and take in Barcelona's view on the roof terraces, taking the stairs is quite fulfilling as you can take in more and be amazed by the artistic ingenuity that Gaudi brings to life. With a glance, you can tell the natural blend that Gaudi targeted. For instance, the ironwork on the balconies resembles skulls or faces while the mosaic green and blue tiles on the front exudes a sense of the sea and even animals scales, with the roof imaging a dragon's spine.

While you could take it in as just a beautiful piece of art, the natural artistic design has a story to tell. As legend has it, the dragon is a representation of Jordi, a hero that drove off the dragon that ate young girls. With such rich insights, Casa Batllo's tour will not only quench your artistic eye but also offer infotainment to help you learn more about Barcelona's culture.

Catalan architect Antoni Gaudí continued his magical touch between 1900 and 1914 with the fantastic Park Guell design. Park Guell boasts of a variety of interesting points such as Serpentine Bench, El Drac, also known as the Park Guell Lizard or the dragon, Hypostyle Room, to mention a few.

Each point, while offering striking looks, holds significant functionality while telling a story. For instance, while the Laundry Room Portico's design mimics an ocean wave, you will be amazed to realize that the exterior pillars secure the road above Park Guell. Park Guell also has passages throughout that not only offer a refreshing twist but also subtly interconnects different rooms.

Antoni Gaudi's brilliant mind has shaped Barcelona's architectural landscape. It is no surprise that the historic monuments have been maintained, restored, and opened for public visits. While a tour to Barcelona is incomplete without checking out some, if not all, architectural works by Gaudi, you need to plan. These sites receive hundreds of visitors daily, and you could find it hard to get in. However, if you book tickets online, you can avoid the hassle of lining up and get the most of your tour. Moreover, you can opt for a guided tour to ensure that your visit is as informative as it can get.