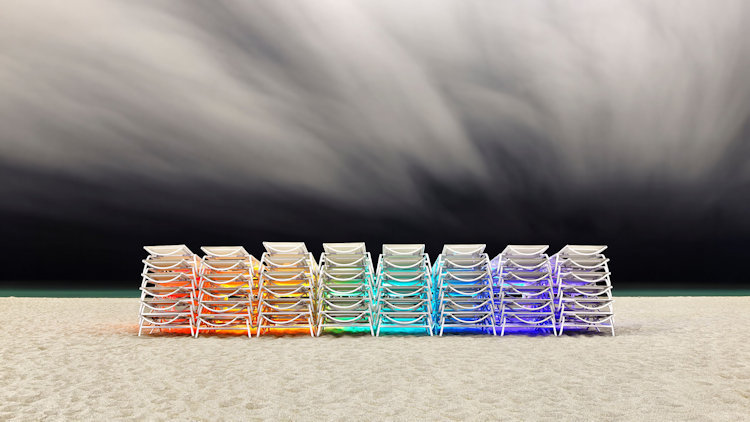 Art Basel is approaching next month and this year Miami will be buzzing with celebrities, socialites, artists and philanthropists. In a city with destination hotels at every corner, here are major events at some of Miami's luxury hotels.

The Sagamore Miami Beach Hotel will present "I'm Not a Trophy," an innovative, immersive and educational fine art exhibition. A first of its kind in the region, “I’m Not a Trophy” by Arno Elias will be an exhibition entirely dedicated to endangered species and indigenous cultures that is centered on the work of the esteemed French artist and wildlife photographer.

Slated to open during Art Week, “I’m Not a Trophy” by Arno Elias will remain on view through February 2020. The exhibit will open to the public on Wednesday, December 4, 2019 as the hotel hosts a VIP Opening Reception at 9 p.m. following the vernissage at the Miami Convention Center.

“I’m Not a Trophy” is titled after the charitable organization founded by Elias dedicated to creating greater awareness for the rapid extinction of endangered species and indigenous cultures around the world through a visually compelling campaign.

Curated by Sebastien Laboureau, the resident art advisor of The Sagamore Hotel, pieces featured in “I’m Not a Trophy” by Arno Elias are presented in partnership with Markowicz Fine Art, the exclusive representative of Arno Elias in South Florida. Pieces on display will include iconic African animals, such as lions, elephants, rhinoceros, gorillas, giraffes, cheetahs and the last of wild tigers in India, but also numerous portraits and artifacts from some of the African Tribes whose lives also depend on a fragile ecosystem. Other artworks on display will be from international guest artists who are involved with the cause.

The exhibition will also highlight the role that African tribes play within the overall ecosystem of endangered species. Pieces on display will bring African wilderness to life and involve all the senses through an immersive experience, encompassing music, design, and never before seen video-footage and photos by Elias.

Including fashion icon and actress Cara Delevingne as ambassador, the premiere of this global initiative is a movement aimed at bringing awareness to the malicious acts of trophy hunting and poaching of endangered species.

The Sagamore Hotel will also host its iconic Saturday brunch on December 7th from 9 a.m. to 1 p.m. and welcome Art Basel VIPs for the 19th consecutive year for a private, invitation-only affair featuring art by Arno Elias, special activations and performances throughout the oceanfront property. Most of the artworks displayed in “I’m Not a Trophy” by Arno Elias will be available for sale, with a portion of the proceeds benefiting the “I’m Not a Trophy” charity that helps save endangered species.

From the Miami Design District to Miami Beach, world-renowned French sculptor Richard Orlinski will be taking over every art hub in the city with his breathtaking wildlife pieces. In partnership with Markowicz Fine Art, Orlinski will be exhibiting sculptures from his newest collection at the Mondrian South Beach, a waterfront property centrally located between all the major fairs. During Art Week 2019 the Mondrian South Beach is offering overnight guests a $100 Dining Credit during your stay. Rates starting at $675 three night minimum.

Designed after revolutionary Dutch designer Marcel Wanders, the Mondrian South Beach’s whimsical and visionary style will blend seamlessly with Orlinski’s brightly colored, contemporary  creations to celebrate art in all its forms. His colossal sculptures will take over the hotel’s soaring lobby, which offers spectacular views of Biscayne Bay.

Meet the artist on December 4th at 7 p.m. as the hotel hosts an Art Basel Cocktail Reception to introduce his new collection in the Magic City. Attendees will preview a variety of lively animal sculptures and enjoy complimentary cocktails and hors d'oeuvres. An innovative and transformational experience for all ages, attendees will “feel and hear the art” as harmonized music also plays to each piece. To RSVP, email RSVP@thedanaagency.com. For more information, visit www.markowiczfineart.com.

During Miami Art Week, The Gates Hotel South Beach in partnership with MUSE Modern & Contemporary Art Fair will showcase a collection of art created by female Bahamian artists and multicultural artists from the Caribbean. In the wake of Hurricane Dorian, a special opening night reception will be held at 6 p.m. on Tuesday, December 3, 2019 with proceeds going to aid those affected in the Bahamian Islands.

MUSE Art Fair will feature an eclectic mix of paintings, ceramics, photographs, sculptures and augmented reality art. The art fair will also include a panel discussion, live art performances and a master class led by internationally known artists to be held at the hotel’s expansive mid-century modern lobby and mezzanine levels.

This December, the InterContinental Miami will partner with global artist Kai to celebrate another exciting Art Basel. Kai, known for his single-frame storytelling and unrivaled use of cement, will take over the hotel with a mix of fan-favorites and never-before-seen works. All of the pieces—including a series of LED animations projected on the hotel’s famous exterior wall—will feature Kai’s popular Imaginary Friend (IF) character.

On Thursday, December 5th, from 8 p.m. to 11 p.m., art fans will have the chance to meet Kai, get better acquainted with IF, and take home some custom art. The limited event is presented in partnership with Markowicz Fine Art and will take place at the InterContinental and include interactive art sessions, giveaways, and plenty of photo opportunities. Press is encouraged to RSVP to the media preview on December 5th from 7-8 p.m. Additional program details will be announced in the coming weeks.

To learn more about the artist, IF, or their plans for Miami, please visit KaiArt.com or follow Kai on Instagram at @kaiart.