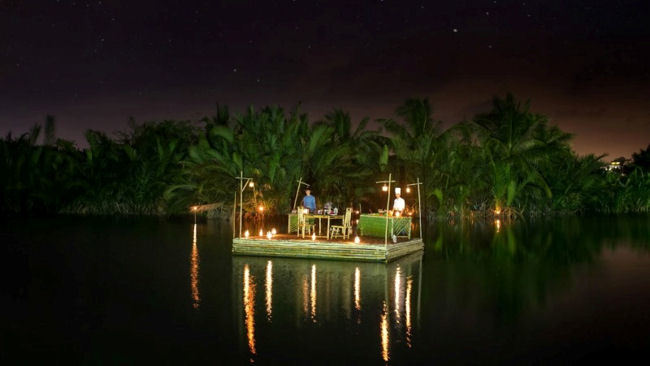 Surveyors have found that a combination of factors – some ineffable, others effable – contribute to a reorientation of astronomical bodies such that recipients of the big question are more likely to answer in the affirmative.

"When a couple sits at a certain table in the Bel Air Bar and Grill, directly opposite the fountain and facing the window, the stars line up without fail," said Paul Ou, marketing and communications manager at the Grand Hyatt Taipei.

Ou said more than 100 marriage proposals have been launched from that 'proposal table' since the hotel opened in 1990 and that the success rate is 100 percent.

At Palace Hotel Tokyo, the concierge team fields requests for assistance from would-be grooms at a heady pace, so much so that they've started tracking the request rate. At present, they are averaging one big ask per week. Proposals take wing all over the hotel, from guest room to private balcony, but the geomancy is more than a little bit auspicious at one particular table in the hotel's French restaurant, Crown, the hotel says.

The booth is semi-private, and there's often a fire crackling in the hearth. The hotel says it's the view of Wadakura Fountain Park and the city skyline that's the real draw. If the proposer is promising a big bold life in matrimony, that view is really going to help make the case.

Everyone knows that June is the most popular month for a wedding, with October hot on its heels. In the U.S., December is the most popular month for a proposal, with Christmas Eve reigning supreme, New Year's a solid runner-up and Valentine's Day a surprising third. The data is less telling for Asia, but the impulse at large in North America seems to be taking root in Asia, too.

At The Reverie Saigon in Vietnam last Christmas Eve, though the hotel had only been officially open for a few months, one young man started working on his knot in an Italian restaurant on the ground floor, named R&J for Romeo & Juliet.

The hotel says it's not sure whether he had anything Shakespearian to overcome, but if he did, then it worked because they later celebrated their wedding in the La Scala ballroom. There were hundreds of people at the ceremony, and no hint of a feud.

Also in Vietnam, Exotic Voyages has noticed a trend with one particular restaurant in Hoi An where proposals are popping with champagne bottles on a regular basis. The tour operator steers nascent brides and grooms on a sunset cruise by bamboo basket along the Co Co River to The Field restaurant in the countryside. They dine in a bamboo raft drawn up on the river bank and decorated with flowers and complimentary wine or champagne.

"We think it's the combination of the sunset cruise coupled with the private riverside dining experience that really has set the mood for this to be the spot," said Andrew Carroll, global head of sales and marketing at Exotic Voyages. "We've tried other places, but none are as successful as this particular place."

Further testament to the power of sailing and sunsets can be found in Halong Bay, where at least once a month someone takes a knee at that time of day aboard a Paradise cruise.

The last time it occurred was in November 2016, when a couple from New Zealand got engaged on the sundeck and then celebrated with the entire ship.

"There was a lot of sparkling wine going around," said Vo Phuong Thao, Paradise's marketing manager. "As is usually the case, the gentleman made sure to tell us in advance so our staff could assist with setup and preparation – all in secret, of course.

Only a short ferry ride from Singapore on Indonesia's scenic Bintan island, there's a particularly lucky spot upon The Sanchaya's private beachfront reminiscent of the powder white sands at The Maldives.

The secluded dining set-up is fringed with myriad flickering candles shaped in a giant heart and the silhouettes of swaying palm trees – all to the sounds of the ocean ebbing and flowing as twilight gives way to night.

"We've had a 100-percent success rate with this remarkable spot and for good reason," said Magnus Olovson, estate manager at The Sanchaya. "Combined with the right champagne, maybe a Ruinhart Rosé, and tender sweets all wrapped up with a romantic bath ritual, you'd have to be a serious commitment-phobe to say no."