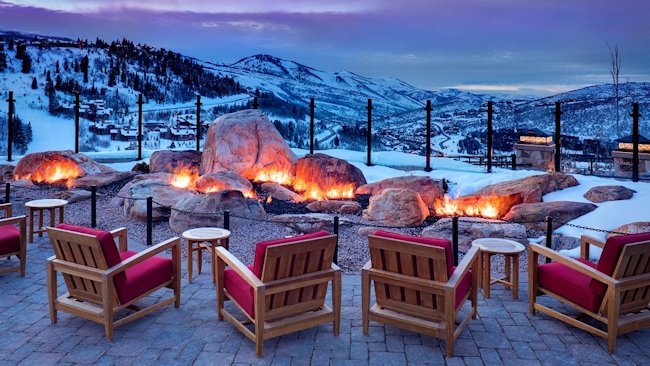 The 177-room resort is internationally acclaimed for its five-star service and amenities including its signature St. Regis Butler service led by Alexander Mattinson who worked for the Royal family at Buckingham Palace; the acclaimed Jean-Georges restaurant, J&G Grill; a luxe 15,000 bottle Wine Vault; the state-of-the-art St. Regis Athletic Club; a 14,000 square foot Remède Spa; and a two-tier, year-round outdoor pool.

As a ski destination, The St. Regis Deer Valley’s 35-mile proximity to Salt Lake International Airport is unbeatable; guests can arrive at the resort and be on the slopes within an hour of landing! The famed runs of Deer Valley, the site of several of the 2002 Olympic Winter Games and the soon-to-be site of the 2014 FIS Freestyle World Cup (January 8-11, 2014) for aerial and mogul disciplines, are accessible directly from the hotel. The resort’s Ski Valets make getting in and out of boots and skis a breeze.

This season, The St. Regis Deer Valley opens its 650-square foot Pavilion to add to the year-round outdoor Mountain Terrace that extends the opportunities to dine outside all winter long and provides an enhanced stellar culinary experience.

Teak wooden tables surround a dramatic fire pit in the center of the Pavilion. Guests overlook the snow-covered slopes of Deer Valley, including Champion, the trail where several 2002 Winter Olympic venues were held, as well as the resort’s two-tier heated pool and Garden of Fire.

The St. Regis Bar plays host to the resort's wildly popular 7452 Bloody Mary Clinics. après ski, there is hardly anything better than shaking and stirring The St. Regis Deer Valley's most popular drink. The St. Regis Deer Valley’s Bloody Mary is named the 7452 for the resort's altitude, and is a masterful concoction with over 15,000 served since the resort’s opening. Guests taking the 7452 Bloody Mary Clinic leave with the recipe and a crowd-pleasing cocktail that they call on while entertaining. The 7452 is made with Park City's High West Vodka (which is an oat-based vodka) and The St. Regis' famed Bloody Mary Mix, then topped with a Wasabi, Celery, Apple Espuma. The glass is lined with Black Lava Salt. A mini pipette of Worcestershire and Tabasco sauce is served alongside it so that guests can determine just how much of a kick they want their 7452 to have. The 30 minute clinics take place every Thursday at 5:30 pm. $16.

New for the 2013 – 2014 ski season is an oft-requested clinic to make the resort’s world renowned Turkey Chili. Attendees spend an hour with Executive Chef Chip McMullin to learn the secret of the resort’s most raved about entrée, Turkey Chili. Included in the Turkey Chili Clinic are the two ingredients that make this the most popular dish at the hotel. Every Wednesday during ski season at 3:30 pm; $21.

For those with a sweet tooth, Fun with Liquid Nitrogen Clinic features chefs from the hotel’s J&G Grill teaching guests how to make ice cream flavors by freezing custard with potent liquid nitrogen. Flavors include Bailey’s Double Fudge, Grand Marnier, Strawberry, Blueberry Pie and Toffee. The 45 minute clinics are held on request in the Confectioner’s Kitchen; $16.

The resort’s complimentary Champagne Sabering takes place seven nights a week at dusk on the Mountain Terrace. As the sun sets, the resort’s expert staff teaches guests the history of sabering and the art of beheading a bottle of champagne before treating attendees to a tasting. *Individual lessons in sabering, where a sommelier teaches guests precisely how to saber a bottle of champagne using a real saber are also available by reservation.

The St. Regis Deer Valley boasts a world-class, 14,000 square foot Remède Spa, which features 11 treatment rooms, a man-made stream running through it and a customizable spa menu. The Remède Spa offers state-of-the-art face and body treatments such as the Deer Valley Regenerating Facial, popular among celebrity guests like Nicole Kidman and Liv Tyler, and The Deer Crest Healing Ritual, a combination of body wrap, facial and body massage, which is enhanced by a warm Vichy shower.

The St. Regis Athletic Club has just brought on a well-known yoga instructor, Randi Jo Taurel, who built a dedicated following in Los Angeles and is now at the resort. Known for her flow-based classes, Randi Jo will offer a range of yoga classes, including Yoga For Skiers Class, targeted to those who want to loosen up pre-moguls and to work out the kinks that come from a long day on the slopes.