Cruising through the Black Sea on Azamara 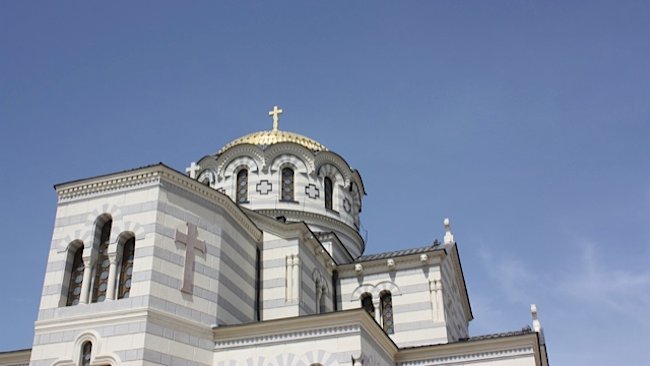 New destinations, new experiences, and first-rate service are key to Azamara's continued success in the luxury cruise market...and they have a loyal following of repeat guests to prove it!

"You'll love where we take you" is the Azamara slogan and part of a campaign to convince seasoned travelers of the advantages of adventure cruising. I'll admit I'm a convert. Less than six months after a voyage from Chennai, India to Singapore with a three-day stop in Myanmar, I'm back with Azamara for a 9-day cruise through the Black Sea, lured once again by exotic ports of call. 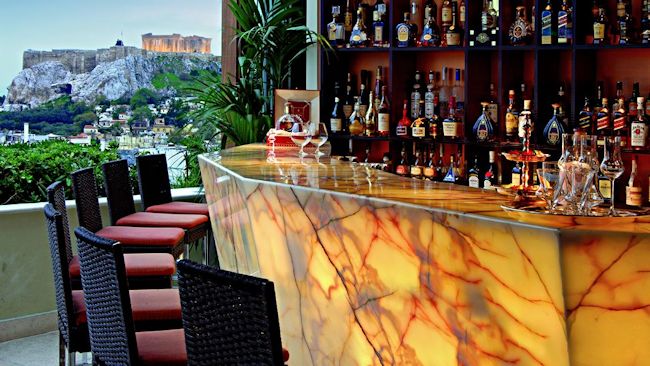 Our holiday begins in Athens at the Grande Bretagne. Azamara offers this premiere hotel as one of its pre-cruise options and the location is fabulous. Dinner at the roof top restaurant looking across to the Parthenon sets the bar high -- exactly as Azamara intends. Pick-up the next day and transport to the port are seamless and I'm amazed at the number of familiar faces I recognize among the crew, including the unflappable (and very popular) Captain Johannes.

This is the first sailing for my husband and another friend (undeterred by the double rate charged single passengers on this cruise). Both give the initial “two thumbs up” after a tour of the ship and a first meal in the Windows café. The Azamara Journey has 4 restaurants: Discovery, the formal dining room, the Window's café that offers breakfast, lunch and dinner buffets, and two specialty dining venues, the Aquilana and the Prime C, which require reservations. The dining choices allow for impressive variety on a small ship. 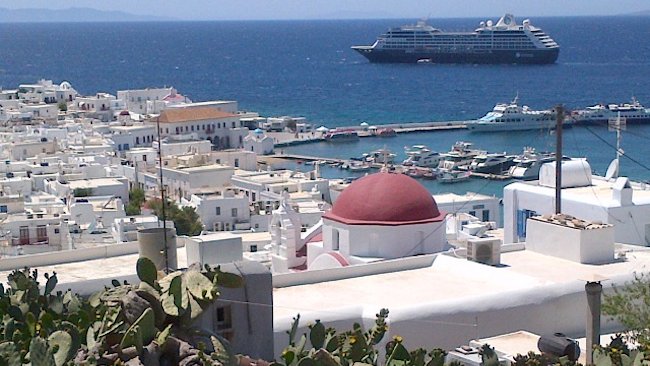 The Azamara 'Journey' in port of Mykonos Port

Mykonos is our first destination and we sign up for an excursion that takes us by boat to the nearby island of Delos. This is not a site to navigate on your own. A good guide is the difference between wondering how many ruins one can appreciate under a blazing sun and hearing the stories that bring this archeological wonderland to life.

Day two brings us to the Dardanelles, the narrow passage that connects the Aegean to the Sea of Marmara. We join other early risers in the Looking Glass lounge to hear the ship's enrichment speaker provide a live commentary and historical perspective. Once in the Sea of Marmara, guests gradually drift to their “at sea” activities, visiting the spa, lounging by the pool, or joining on the ship's many activities. 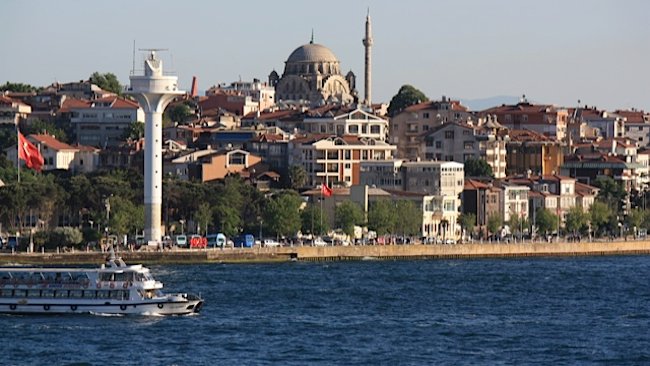 In the late afternoon, we approach Istanbul and the Bosporus Straits. This 19-mile waterway is famous for its dangerous currents and frequent fog but we are blessed with sunshine and gentle warm winds. The views include a massive fortress built by the Ottoman Sultan Mehmet II and the Topkapi Palace. Minarets stretch skyward and private mansions line the shore. From our outside table on the ship's stern, we snap photos of Europe to our port side and Asia on the starboard. Azamara planned this perfectly!

Nessebar, Bulgaria is our first port of call in the Black Sea and few on board know what to expect. The old city, located on its own small island and connected to the mainland by a causeway, is the major tourist attraction. We decide to explore it on our own. Once this was a Greek trading colony and its city walls harken back to ancient times. Today restaurants, churches and souvenir shops line its narrow streets and quaint alleyways. 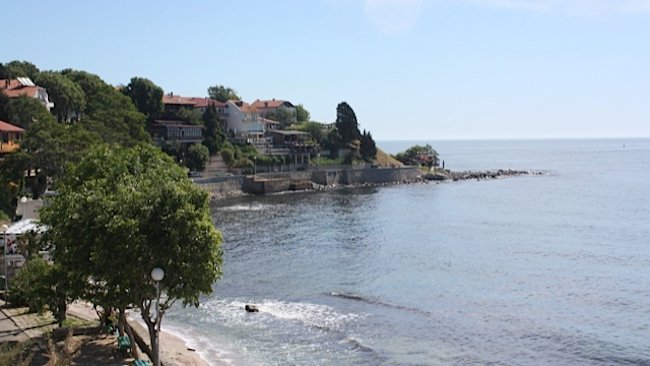 The next day finds us in Constanta, Romania where the poet, Ovid spent his final years in exile (complaining) after he offended the Roman Emperor, Augustus. There is no question we have arrived in a former communist port. Rusting Soviet cranes hunch over the harbor like an invasion of prying mantis. The Azamara tours are our only options here and we enjoy our look at the downtown area and visit to the Murfatlar winery but it is clear that a tourist infrastructure is lacking.

Quite the opposite is true in our next destination, the city of Odessa. Our ship docks at the base of the Potemkin steps that descend from the town center. I pre-booked a tour with a local guide named Katherine Ergeeva (adisej@ukr.net) who meets us on the dock and has a car waiting. She has designed a custom tour that exceeds all our expectations. The city has retained a cosmopolitan beauty that rivals any European capital and we are blown away with how much there is to see and enjoy. 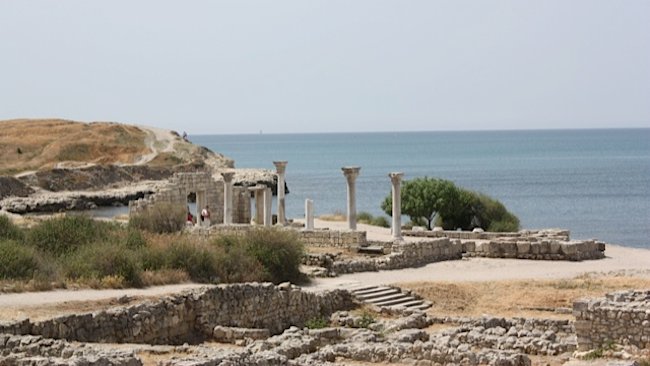 The next port on our voyage is Sevastopol on the Crimean Peninsula. Its natural harbor has long made it a desirable location and today it is the home of both the Ukrainian and Russian navel fleets. The city was heavily damaged during World War II and was closed to all but residents during the Soviet period. Most of the tour options focus on Crimean and WWII battlefields but I select a city tour. Our guide speaks excellent English but is constantly admonishing us to “pay attention” as she shepherds us through ancient Greek ruins. My husband wants to return to tour the submarine base and I'd like to learn more about Florence Nightingale's time here.

Tonight is the Azamazing Evening, a complimentary onshore event designed to give insight into local culture. Azamara has arranged for the Black Sea Navy Ensemble to treat us to a private performance under the stars at the Mikhailvoskaya Battery, at 19th century fortress. Our hosts are welcoming, the show delightful. The appetizers and desserts promised during intermission turn out to be a full-fledged feast! Luckily we've had plenty of practice eating throughout the cruise. 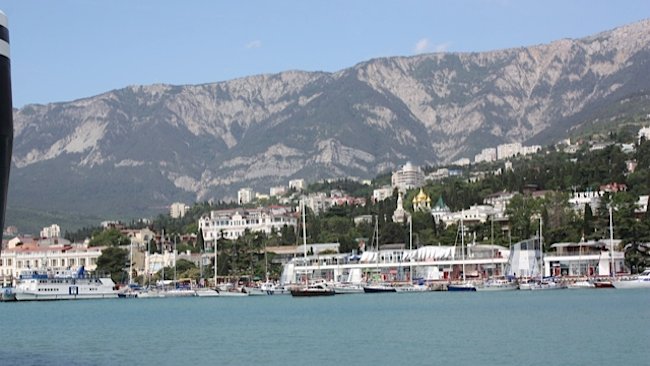 The following morning our ship arrives in Yalta and it is magnificent. Nestled between the ocean and the sea, the city enjoys a subtropical climate that made it the summer playground of first Russian aristocrats and later Soviet bigwigs. We have scheduled a tour with Maria Telnova (maria_ivanova27@mail.ru) and she has put together an itinerary that takes us to the Alupka Palace, Swallow's Nest Castle and the Lavadia Palace (location of the 1945 Yalta Conference) with a stop for lunch and panoramic views. Once again we feel like we've hit the jackpot. Maria is a fabulous tour guide, her English is first-rate and she has organized the tour so we visit each site when the tour buses are elsewhere. Our day in Yalta will long be remembered as a highlight of the trip.

The Black Sea cruise ends with a sea day and disembarkation in Istanbul just as demonstrations break out against government plans to develop a popular local square. Ever vigilant, Azamara monitors the situation and provides both guidance and assurances for those passengers remaining a few more days. As we head to Ataturk International Airport, our route with the Bosporus on the left and Istanbul on the right serves as a fitting farewell from a part of the world where events on land and on sea have for millennia been so inexorably linked. 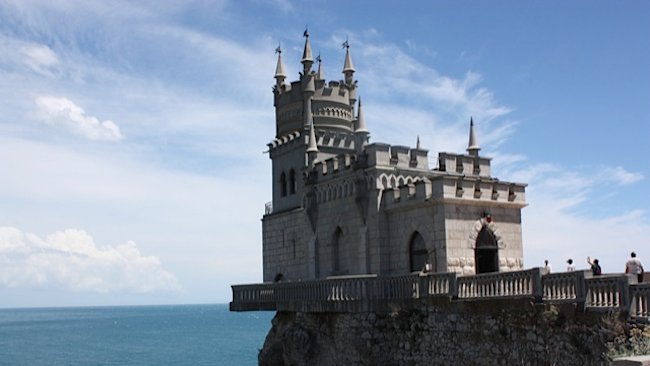