Your Dream Destination? Azamara Cruises Takes You There 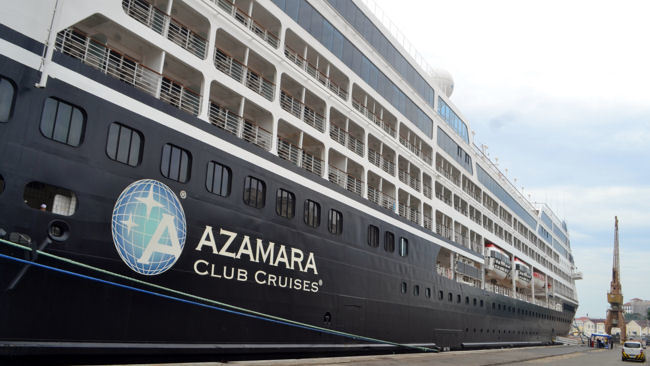 Another dream: to experience the deliciously sexy and sophisticated atmosphere of Buenos Aires and the Tango! Early this year, looking over various cruise lines’ itineraries, and keeping in mind that I wanted a vessel that was mid-sized and elegant, I found Azamara Club Cruises and a “12-night Rio Carnival and Argentina Voyage.” Spot on!

The Azamara line has two ships – the Azamara Journey and Azamara Quest – not too big and not too small, but just the right size for 686 guests. At this size, the Azamara can go to less-traveled ports like scenic rivers and waterways that are off-limits to big cruise lines. This adds up to a richer travel experience and – icing on the cake – the line has a concept called Destination Immersion that recognizes that travelers want to experience destinations in depth, not in a short afternoon. Thus, one has longer stays, more overnights, and night touring. My adventure began on the second week in February, in the secure and experienced hands of Captain Johannes Tysse who hails from Norway – where they know a little something about sailing. Having worked on other vessels such as container ships and oil tankers, Captain Tysse says “cruise ships offer much more interesting cargo…and that would be people.” Nice. 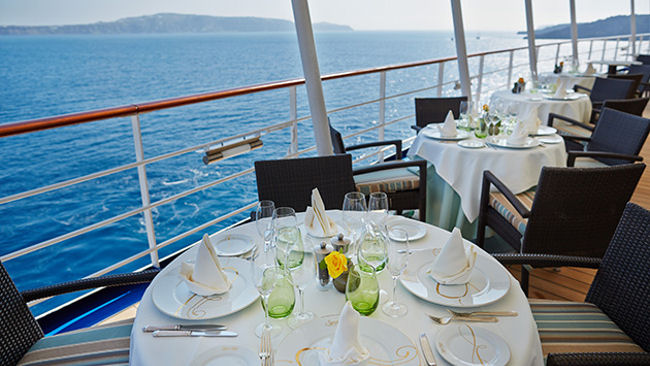 You’ll never get bored on the Azamara. When not touring ports-of-call, there are early-bird “Walk a Mile” get-togethers, ballroom dance instruction, cooking classes or downward dogging with a Yoga instructor. I particularly liked the Land Discoveries Specialist programs and Special Interest Enrichment talks. I attended “It Takes Two to Tango,” fanning my excitement for upcoming Argentina. Each evening starts with a social hour of complimentary drinks and hors d’oeuvres, then flows into elegant dining in one of several restaurants, and can continue (depending on your stamina) into the evening with exhilarating entertainment (guitarists, dancers, cabaret entertainers, Broadway-quality shows); if you’re up for it, you can wend your way into the wee hours disco dancing or – my fave pastime – sitting on my veranda, champagne flute in hand, gazing into the dark, always-mesmerizing sea.

The crew was at all times professional, caring and kind. My stateroom was very pretty, bed comfy and the whole wall leading to my private veranda was glass. Really – what more could I ask? Carnival! Tango! Bring it on! 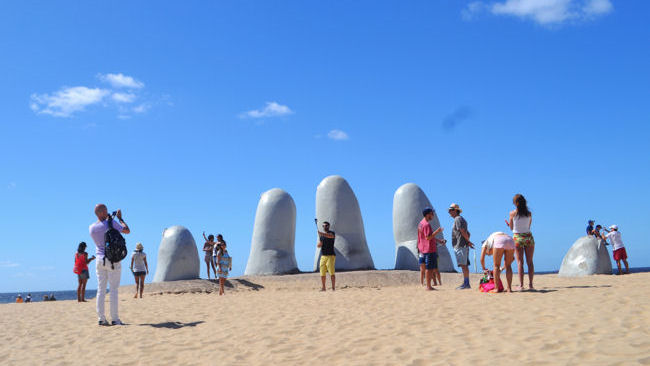 First port of call, Montevideo, Uruguay to check out the imposing blend of modern architecture along the sea and the historic colonial buildings in Ciudad Vieja. In fact, the country boasts a UNESCO World Heritage site, Colonial del Sacramento, with quaint cobblestone streets, stone walls, and the Real de San Carlos bull ring. The city is home to nearly half the country's population, not surprising for a country where sheep and cattle outnumber human residents by about ten to one. Uruguay has one of South America's most stylish seaside resorts - Punta del Este. Situated on a narrow peninsula between the Rio de la Plata and the Atlantic, it is an upscale international hangout for celebrities, its marina filled with pricey yachts. For a quirky visit, wander over to the sands of Brava Beach to check out a giant hand made of stone that seemingly emerges from the core of the earth; this humorous, oversized sculpture was created by Mario Irrazábal and whether you believe the hand is waving a greeting or a farewell, no matter. It's a hoot and a fun photo-op. 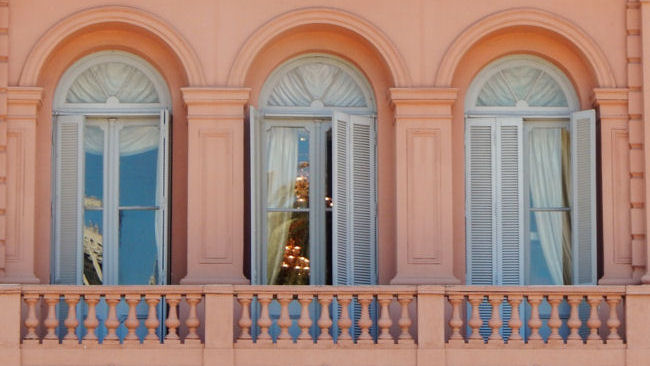 Then, Argentina - Buenos Aires to be specific. The city is a profusion of neoclassical architecture, lively cafes, chic boutiques, top notch restaurants, and a vibrant nightlife - a true cosmopolitan capital in every sense of the word. And what would a visit to this city be without visiting La Casa Rosada, on whose balcony Eva Peron gave her "Don't cry for me” speech? It was a heady moment as I gazed up at the rose-colored balcony and imagined the worshipful crowd listening to her moving talk. The natural progression from Eva’s balcony was to visit La Recoleta Cemetery where Peron’s mortal remains rest in the family mausoleum and where, each day, fresh flowers continue to be placed.

On my way back to the ship, I came upon a scene that, I’m told, is typical on the streets of Buenos Aires. A small crowd spontaneously gathered around two dancers as they stealthily stalked toward each other and clasped in an intimate embrace. Strains of a bandoneon (an accordion-like instrument) sounded as the couple began their alluring dance. Their audience, including this writer, was utterly captivated. 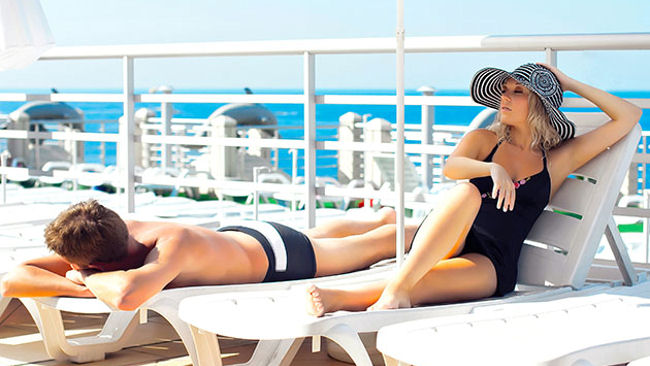 This sensual dance, Tango, came to Argentina in the late 1800s influenced by the Cuban habanera and by music depicting longing, melancholia and loss. It is the country’s cultural artifact that both defines and is defined by Argentina. Its sacred tradition, if you will, is the beating heart of tango. Thanks to a wonderful event that Azamara offered – their AzAmazing Evening – we were taken on a private tour of El Zanjón de Granados, a beautifully restored colonial mansion where we imbibed tantalizing cocktails and indulged in decadent sweets. The highlight: an evening of Tango with top-quality dancers and singers in this “Tango Temple,” one of the most exclusive atmospheres of the city. Several couples, the women all beautiful, wearing gorgeous, wispy dresses, the men tall, dark and yes, handsome, performed the dance with improvised movements consisting of long strides and intertwined actions; their kicks simulating knife movements or the sliding, shuffled feet that mimic the walk of a gangster, echoing the dance’s rough roots in spite of today’s glamorous beauty. I came, I saw, and I sated my craving to truly experience Tango in Argentina – and it was perfect! 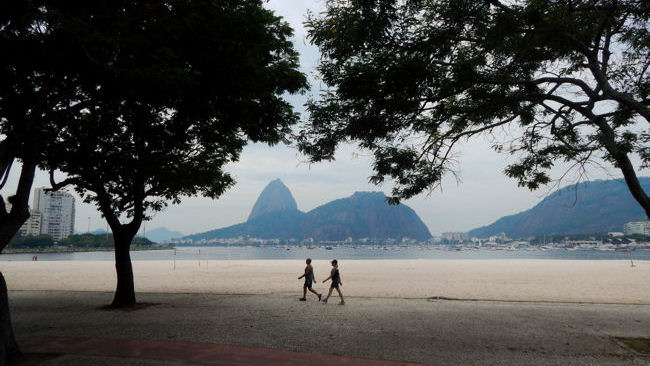 Cidade Maravilhosa, Marvelous City. This is what locales call Rio de Janeiro, and for good reason. The color, the music, the sultry samba – and of course, the world-famous annual Carnival. Here are found some of the finest beaches on the planet: Copacabana, Ipanema and Leblon, as well as some of the world’s tiniest bikinis worn by those famous Ipanema girls. Rio is like no place else on earth. I took a cable car up Sugar Loaf Mountain where the 360 degree view of Rio’s residential neighborhoods and the bay are unmatched. In fact, while at the top I saw several planes flying over the city – all below me. I visited Christ the Redeemer statue, one of the world’s best-known monuments, traveling through the Tijuca Rain Forest by cog train till we reached the top of Corcovado Mountain. This powerful art deco work towers 125 feet and was built by Brazilian Heitor da Silva Costa. Christ the Redeemer has been the symbol of the city since 1931 and the statue’s open arms represent the warmth of the welcoming Brazilian people.

Our Azamara cruise offered a Carnival Samba Parade tour, including transportation to and from the event, an ideal opportunity for me to fulfill this bucket-list dream I’ve harbored for so long. The samba parade is held in the Sambadrome, designed by famed Brazilian Oscar Niemeyer and built in 1984. It runs a half mile on the Marques de Sapucai street, now converted into a permanent parade ground with bleachers built on either side. Its capacity is 90,000 and I can attest to the fact that there were no empty seats the night I was there. The parade consists of approximately a dozen samba schools - dancing schools devoted to samba, this African-Brazilian dance. The schools practice all year for the culmination during the Mardi Gras parade when each school with around 3,000 performers in elaborate costumes sashays through the Sambadrome. You can imagine that this takes quite awhile; in fact, the parade typically starts around 8 pm and winds up at 6 or 7 am the next morning. Gigantic, astounding floats passed by, dancers in mind-blowing costumes swayed before us, and the music never stopped. Carnival - it has got to be seen (well, perhaps not for 10 long hours) to be believed. I’m now a believer – it is one of the greatest shows on earth!

Argentina and the Tango: check. Brazil and Carnival: check. As that famous ex-mayor/film star once declared: “I’ll be baaaack.” Perhaps next time I’ll explore the Greek Isles, the Holy Lands, or Pearls of the Adriatic - to dream and perchance have the dream realized on an Azamara Cruise!