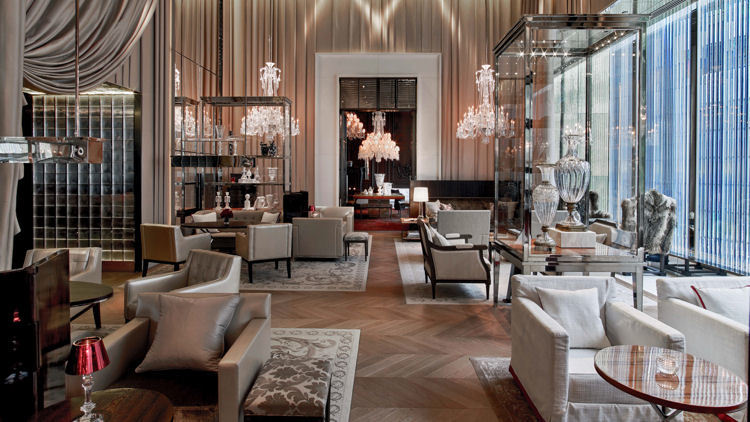 Baccarat Hotel New York is the first hotel and global flagship for Barry Sternlicht and SH Group. Directly across the street from the Museum of Modern Art and steps away from Fifth Avenue’s legendary shopping, the hotel occupies the first 12 floors of the split-level tower that rises 550 feet above West 53rd Street. Skidmore, Owings & Merrill served as architects for the 50-story tower, while Paris-based Gilles & Boissier designed the interiors. Glowing inside and out, the lower levels of the hotel are veiled by a 125-foot wide corrugated crystal- like curtain. Baccarat Hotel New York features 114 superbly appointed guest rooms and suites and glamorous second-story lobby salons and bar. The Bar at Baccarat, just off the opulent Grand Salon, is an epic space featuring barrel-vaulted ceilings, a 60- foot bar and an outdoor terrace overlooking the MoMA. The hotel also features a 55- foot indoor pool, an elite fitness training facility and the first Spa de La Mer in the United States. The hotel’s interiors combine Baccarat’s French classic aesthetics with a fanciful modern sensibility. The tower’s 59 private residences are accessible through a separate entrance and have access to all of the hotel’s amenities.

Baccarat Hotel New York is the latest addition to the luxury travel ratings that have been the gold standard in the hospitality industry since 1958.