Be New Orleans Hip at New B on Canal Hotel 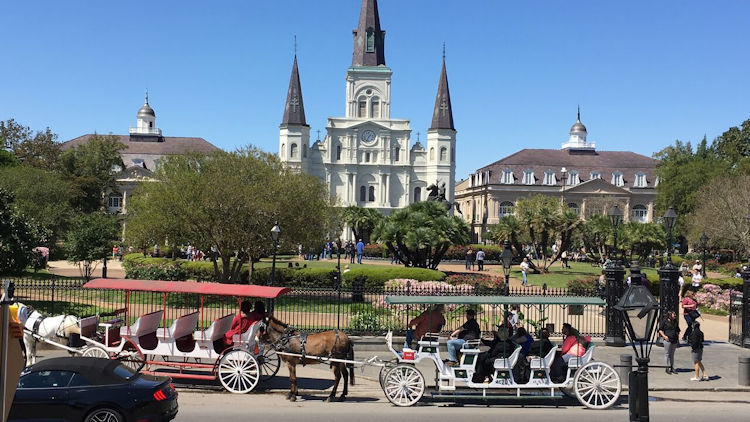 As New Orleans celebrates its 300th birthday, a new hotel is celebrating its Spring 2018 launch following a multi-million-dollar renovation.

Located at 1300 Canal Street in a 15-story building dating to the 1930s, the 155-room B on Canal is a new boutique hotel turning heads with its soaring, two-story lobby made bright in black and white, including a custom marble floor.

The location is in the bustling central business and theater district, near Mercedes-Benz Superdome, Tulane Medical Center, the Biosciences District, and not far from the French Quarter.

Inside, guests are greeted by marble arches and original medallions over a stairs doorway leading to a small balcony and over lobby elevators with gold-brushed doors set against a stark black wall. Large, white Roman columns topped with scrollwork stand in elegant contrast to a whimsical, modern, black chandelier overhead. Chrome and crystal sconces on mirrors also light the room, while visitors lounge on a sombrero-shaped sitting pouf stylishly tufted in black. Modern, purple velvet upholstered chairs are pops of color amid the gray/black/white color scheme. 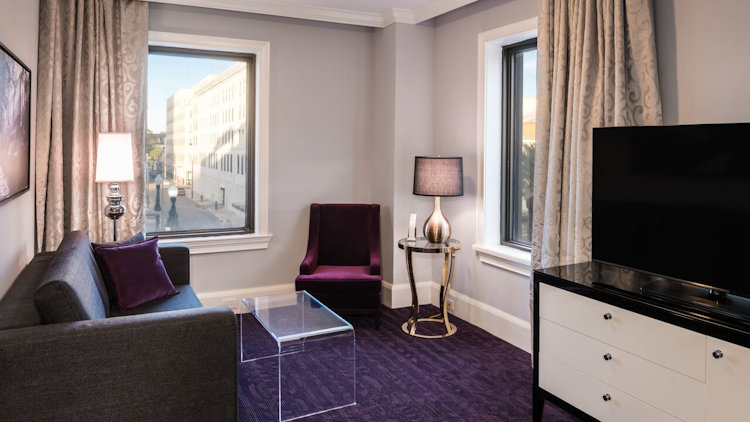 The official news release notes, “As a nod to the hotel’s location, black-and-white illustrations representative of the Renaissance period mixed with elegant Mardi Gras masks adorn the walls and hallways, appealing to travelers’ desires to be immersed in the destination.”

Staff are friendly, welcoming and helpful, always quick with a smile. They happily provide recommendations to points of interest and dining options as well as directions. 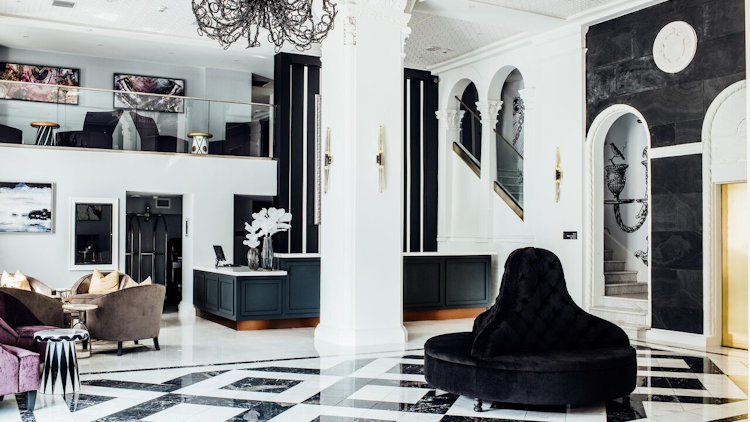 Great for Couples and Others

In the heart of Canal Street, the property works for both leisure and corporate travelers, but couples, too, will especially like the sexy tone and may opt for one of the two posh suites. Our room featured not only a pair of black-and-purple Mardi Gras masks on the bed but a fanciful white stuffed gator, a take-home souvenir.

Rooms range from 231 to 863 square feet including 24 junior suites, doubles and a mix of king rooms plus one corner room with an extra window. That room connects to another, so it works well for couples or friends traveling together. Six rooms have a pullout couch, a nice feature for families.

Other B signature elements include a B Active fitness center; a B Indulged Spa Suite with a variety of services; Monscierge, a digital touch screen concierge and destination guide (also available via a mobile app); and there’s complimentary Wi-Fi. There is no pool.

Wisely, management is partnering for packages with the historic Saenger Theatre, a beautifully renovated 1927 movie house (to the tune of $53 million) just across the street, its name once again is blazing in bright lights. The local newspaper reported that 11 of the 17 original chandeliers were reinstalled, nine “miraculously found for sale in a The French Antique Shop on Royal Street.” Today, it is “the” New Orleans destination for Broadway shows, concerts, comedians and more. 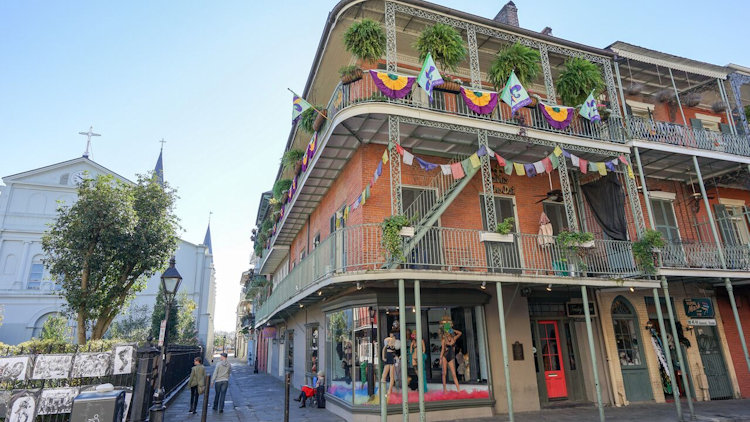 While culture and entertainment sit just yards from B on Canal’s front door, the heartbeat of the Big Easy, the French Quarter, is also only about a 15- to 20-minute walk. Better yet, hop on one of the iconic New Orleans street cars that stop just outside the hotel — exact change required, so count out your quarters for the $1.25 fare.

Playing on its “B” name, slogans and reminders around the property suggest “B our guest,” “B yourself” and for the Spa Suite, “B indulged.” You can also B refreshed anytime with all-day ice water dispensed by the reception desk, very welcomed on a hot, sultry day.

We noted the framed saying in our black-and-white bathroom: Wake Up. Seize the Day. Go to Bed. Repeat. Good advice.

The amazing day and evening views of busy Canal Street from high up evoked a feeling that we were in the middle of the action, with the Crescent City at our feet, beckoning us outside for just one more adventure. 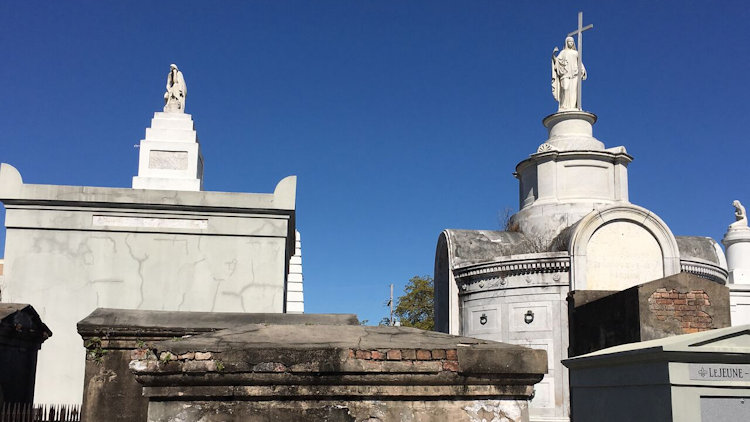 The 100-seat Madam’s Modern Kitchen + Bar fronts Canal Street, where walk-by traffic pops in to mingle with hotel guests over modern, casual American cuisine. Says Exec Executive Chef Drew Mills: “As a local myself, I envision this being a destination for hotel guests, but also a neighborhood mainstay offering an approachable menu that defines the ‘new style’ of Nola’s traditional cuisine.”

Madam’s takes its name from the surrounding neighborhood’s past, known as Storyville, the designated red-light district from 1897 to 1917.

The walnut wood bar is eye-catching as are marble tabletops, mirror accents, plush suede and leather seating, white brick walls, and slate gray flooring. Designers playfully noted that “some may even find traces of Madam throughout from personal poems to original trinkets or a lipstick stain where she left her mark.”

There’s seating at the bar plus dining room banquets and both high-top and traditional tables for small or large groups plus a private dining that seats 12.

Of course in a town synonymous with music, live entertainment is on tap three-four nights a week with a corner platform stage that also will host poetry readings.

Meeting groups of 25-50 have access to two small meeting rooms, 324 and 168 square feet amid the 1,750 total square feet able to handle business or social gatherings and weddings. The ballroom and meeting rooms have rich drapery with tie back curtains and sheers, buffet cabinets with granite counter tops and mid-century wall sconces, all under an embossed metal ceiling.

Positioned at the corner of Canal and Saratoga streets, the ballroom has outstanding views of the theater district.

B on Canal offers special rates for birthday, AAA, AARP, military/government as well as seasonal offers. For details, visit www.boncanal.com. 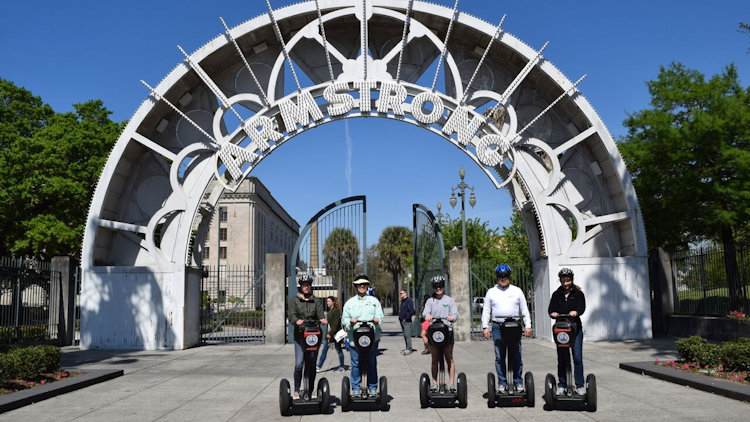 While in New Orleans

To maximize a stay at B on Canal Street:

-- Voodoo and cemetery tours – Any of the many tours under these headings will inform you of the final resting place of the “voodoo queen” Marie Laveau, which is in the oft-visited St. Louis No. 2 Cemetery. Hers is among the top five tombs visited in the U.S. This cemetery, though, is not open to the general public, so to see her tomb, opt for a tour.

Today’s additional oddity is the pyramid-shaped tomb of the as-yet-deceased Nicholas Cage, who also bought a very haunted home here. It’s no longer on his asset sheet.

-- Haunted History Tours did a great job explaining the reality behind voodoo, modern-day practitioners and its history as an often-misunderstood religion. “You’re more likely to find a voodoo practitioner in New York City or Miami,” said our guide. A good resource is the book “New Orleans Ghosts, Voodoo and Vampires Journey into Darkness” by Kalila Smith. Fans of FX-TV’s “American Horror Story” will be among your tour compatriots.

-- Dr. Gumbo’s Food Tour – For a great time in a fabulous food city, this is the way to go (cocktail tours also are offered) with six stops to sample pork crackling, sweet potato beignets, muffuletta, catfish poboys, creole beef brisket, seafood gumbo and pralines. The Pepper Palace features an overwhelming number of sauces, salsas and peppers – one so hot you have to sign a waiver.

-- Literary Tour — For Faulkner, Capote and Tennessee Williams fans, this one’s a must, and super fans of the latter should coincide their visit with annual spring Tennessee Williams Festival. F. Scott Fitzgerald hung out for a time at the boarding house at 2900 Prytania.

Fans of John Kennedy Toole’s Pulitzer Prize winning “Confederacy of Dunces” will want to meet up with the statue of the outrageous Ignatius J. Reilly as noted in the book’s opening and on a plaque: “... Reilly’s supercilious blue and yellow eyes looked down upon the other people waiting under the clock of the D.H. Holmes Department Store studying the crowd of people for signs of bad taste in dress.” Both the clock and statue are in front of what’s now the Hyatt French Quarter Hotel.

Yet with so much to see, one of the best ways to cover a lot of ground in the Crescent City is with City Segway, which not only whizzes you on two wheels by the must-sees but also takes you into history neighborhoods, like Faubourg Marigny’s Frenchman Street known for music.

Lastly, at any of the many bars and restaurants, raise a glass to New Orleans’ 300th. To plan a visit, check out www.neworleans.com.

Kathy M. Newbern and husband J.S. Fletcher are award-winning freelance travel journalists based in Raleigh, NC, who have visited 76 countries, all seven continents and reported on 80 cruises. They often incorporate their travels into their other business, www.YourNovel.com, where they put you and your sweetie in your own personalized romance novel "wild" or "mild."

Photos courtesy of B on Canal Street, Fletcher/Newbern and New Orleans Convention and Visitors Bureau