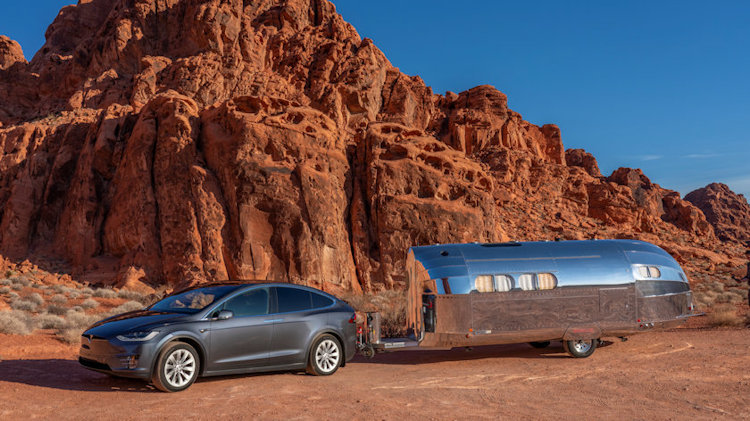 As electric technology becomes the new measurement of luxury in the 21st Century, Bowlus -- the world leader in performance luxury recreation vehicles -- has announced that their Terra Firma RV has proven itself as the perfect complement to premium electric SUVs. For instance, when Bowlus did internal testing with the Tesla Model X, the travel trailer achieved 71% of the SUV’s estimated towing range when EPA highway fuel economy tests were mimicked in real-world conditions. The SUV, which has a range of 330 miles on a full charge, was able to drive 235 miles while pulling the Bowlus Terra Firma -- an industry best.

The announcement of Bowlus’ range success further delivers on the RV brand’s mission to constantly elevate the luxury land traveler’s experience. The match between vehicles is even more pronounced when noting Bowlus functionalities including emergency EV charging capabilities, in which the Bowlus itself can charge an EV that is low on battery power.

The range testing with the Bowlus Terra Firma included a similar driving style to EPA highway fuel economy tests, which entails driving the legal speed limit in California (55 mph while towing), and in Nevada reaching highway speeds of 55-60 mph, while keeping speed limits on secondary roads and driving slower where conditions were windy or uphill. The outside air temperature during the tests was between 65-70 degrees Fahrenheit, and no air conditioning was in use, only fan air. Heated seats and heated steering wheel functions were used during colder mornings. The distance traveled on the test was 930 miles including a wind advisory, along with a sea level to 4,730 foot climb.

Clients in the Golden State will soon find electric power to offer even more of an advantage as the California Legislature recently passed an Assembly Bill banning the sale of small gas-powered engines, including generators used in many other RVs. An amendment from the California Air Resources Board (CARB) also made this apply to generators built into RVs from manufacturers. Bowlus, on the other hand, has always had an eye toward sustainability and, with a lithium-iron-phosphate battery power system capacity up to 600 Ah/7680Wh, is proud to offer a green alternative for off-grid adventuring without the worry of gasoline for up to two weeks, or two nights of air-conditioned land travel.

As more electric utility vehicles come on the market, such as the Ford F-150 Lightning and the Rivian R1T and R1S electric trucks, Bowlus plans additional range testing with other vehicles.

For more information about the Bowlus luxury RV visit Bowlus.com