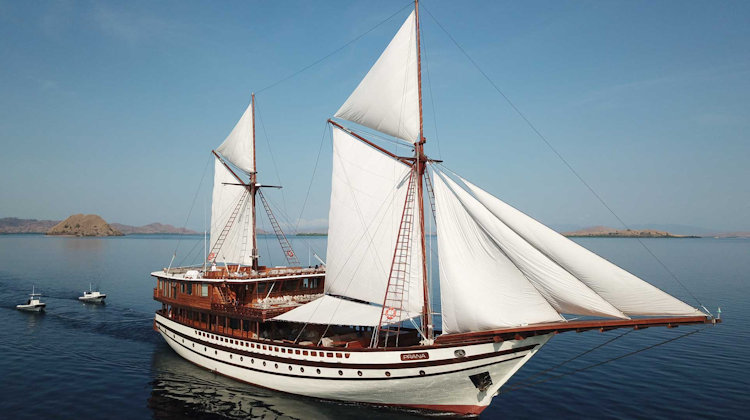 Prana by Atzaro, the world’s most luxurious charter Phinisi super-yacht based in Indonesia is to relaunch post coronavirus lockdown with some exciting new sailing routes from July 2020.

The two new itineraries, from Alor to Maumere (The Coral Triangle) and Labuan Bajo to Bima, will sail through the beautiful and remote islands of Indonesia, past active volcanic islands, pink beaches, waters teeming with marine life and some of the best diving sites in the world.  From Komodo Dragons to Whales, Manta Rays to Turtles, these trips offer the chance to see the wonders of nature up close and personal.

A beautiful hand-built boat, the biggest of its kind in the world, Prana by Atzaro can accommodate 18 people in nine luxurious suites.  At just over 55 metres in length and 11 metres wide, Prana by Atzaro has been crafted in the style of a traditional Indonesian Phinisi, a sailboat with two masts built entirely of ironwood and teak according to traditional methods and recognized by UNESCO heritage, created by the founders of the luxury hotel group ‘Atzaro Group’, from Ibiza.

Sailing the stunning waters of the Alor archipelago in the heart of the Coral Triangle, Prana by Atzaro will journey west from the islands of Alor to Maumere (pictured below) on the ultimate 13-day, 12-night cruise through the unexplored islands of one of the most beautiful locations in the world. 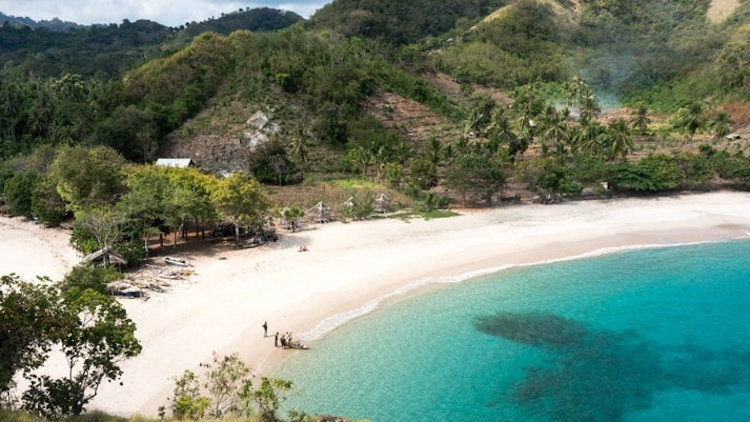 Journeying past uninhabited jungle swathed islands edged with pristine beaches, volcanic outcrops and crystal clear waters teeming with marine life, crater lakes and the Batu Taru volcano on the small volcanic island of Komba Island in the Flores Sea, this voyage on Prana by Atzaro is a trip of a lifetime and the ultimate bucket list destination.

The Coral Triangle is a diving paradise and one of the best diving destinations in the world, with hugely diverse and densely covered reef sites, home to more than three-quarters of known coral species and 37% of the world’s coral reef fish. Home to six of the world's seven species of marine turtle, as well as blue whales, sperm whales, mantas, dolphins and dugong, the area has the highest diversity of marine species, with more than 600 reef species of reef building coral - ten times more than the Caribbean Sea and over 2000 species of reef fish.

Komodo National Park is a mystical-looking cluster of islands rising out of the ocean like the scaly backs of enormous Jurassic reptiles.  Also home to the famed Komodo dragon – it’s the only place in the world to see these prehistoric creatures. 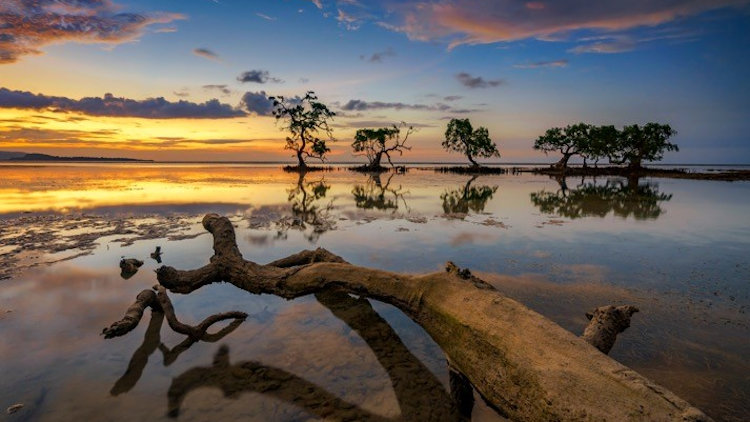 This 11 day, 10 night trip will take you on a journey of a lifetime. Plunging savannahs, arid in the summer and bursting with life in the winter, deserted white and pink sand beaches, mountainous outcrops, ancient volcanoes, lakes, waterfalls and turquoise oceans teaming with marine life, the diving here is among the best in the world, with an incredible array of coral gardens, Manta Rays and turtles. while the East coast of Sumbawa for thrill-seekers, has fantastic snorkelling with Whale sharks.

Life on board Prana by Atzaro has something to keep even the most active adventure seeker happy. Learn to scuba dive with the yacht’s resident dive instructor or take a leisurely drift snorkel across volcanic vents. Alternatively, launch sea kayaks and paddle boards to explore the jungle-draped coastlines or get your thrills wakeboarding and water-skiing around the calmest of lagoons. Fishing equipment is also supplied along with towable floats for effortless fun.

Or for those just looking to relax, 4 spacious decks with king size daybeds offer abundant places to retreat to. A yoga deck doubles as an open-air cinema and Prana’s main deck has inside and outside living and a luxury spa.

Designed with the utmost luxury, Prana by Atzaro is fully soundproofed and the suites are decorated with sumptuous vintage fabrics and contemporary linens in a sophisticated palette. Prana by Atzaro offers more space and comfort than any other Phinisi, with all the super deluxe mod cons of a lavish five-star hotel.  There is one lavish master suite and eight further suites on-board.

The 18-man crew includes a Cruise Director, Dive Instructor, several chefs, stewards and expert spa therapists; all on hand to deliver a seamless experience and to ensure all your needs are met.

With fine dining, unlimited water sports, on-board spa treatments, unforgettable diving and the chance to visit some of the world's most beautiful heritage sites, ‘Prana by Atzaro’ encapsulates a perfect unison between ancient craftsmanship and contemporary luxury.

The cuisine on-board, carefully created by the yacht’s chef, includes both Asian Fusion and Western dishes. Everything is made from the freshest, local ingredients and served by discreet staff alfresco under the stars, in the cool of the air-conditioned on-board dining room or, Robinson-Crusoe style, on a powder white sandy beach under shady parasols. After dinner you can relax at the open-air cinema or indulge in a pampering spa treatment. In the morning, as the wind catches the sails, take a yoga class on the topmost deck - sun salutations will never be the same again.

A voyage on Prana by Atzaro is a once in a lifetime experience.

Charter fees for each of these two new voyages start at $14,500 per night for full charter, dependent on routes and timings.

For details on sailing dates and destinations go here:  https://pranabyatzaro.com/luxury-yacht/rates-and-schedule/#2020

Other destinations that the yacht offers according to season:

Get up close and personal with the world’s largest lizards in their untamed natural habitat, visit surreal pink beaches, watch spine-tingling sunsets and dive some of the world’s most pristine coral reefs. Three big islands form Komodo National Park: Komodo Island, Rinca Island and Padar Island, plus a few other islets. This area is a World Heritage Site with over 2,000 square kilometers of protected wildlife including roughly 5,700 Komodo dragons as well as wild boar, water buffalos, deer, horses, snakes, monkeys and the magnificent marine life under the waves.

Notorious for the untouched natural beauty of its cays and shoals, Raja Ampat offers our guests one of the most remote destinations on the planet.  Here you can cross the equator with giant manta rays, explore prehistoric caves, visit primordial tribes, kayak around virgin coastlines and discover dive sites famed for having the most species recorded on a single dive. Raja Ampat translates as the ‘Four Kings’ and is located off the northwest tip of the Bird's Head Peninsula on the island of New Guinea. This region embraces over 1,500 small islands surrounding the four main islands of Misool, Salawati, Batanta, and Waigeo.

The Spice Islands, also known as the Banda Islands, rich with trading history, offer spectacular historical sites and are so remote that only the most intrepid travellers visit their vast treasure trove of wonders.

They are an east Indonesian archipelago comprising of two provinces, Maluku and North Maluku which are known for their volcanoes and palm-lined beaches. Gasp at the rich colonial architecture of Banda Besar, hike Mount Api, race the locals in their boats, spot whales and dolphins and dive pristine coral reefs thronging with marine life. The Spice islands region of Indonesia is the stuff of legend and features in many traditional and modern books, stories and songs. There are perfect sunrises in front of the volcano and mellow sunsets with cocktails served on snowy white beaches framed by untouched rainforest. There are as many enchantments below the water as there are above and vast shelves of coral plummet into the deep blue ocean providing one of the most biodiverse seascapes in the world.

Originally famous for their production of nutmeg, cloves and mace, this cluster of islands was a sought-after jewel in the European colonial crown of the 16th century. However, when the island’s monopoly on this commodity ended in the 18th century, the region faded into gentle obscurity.