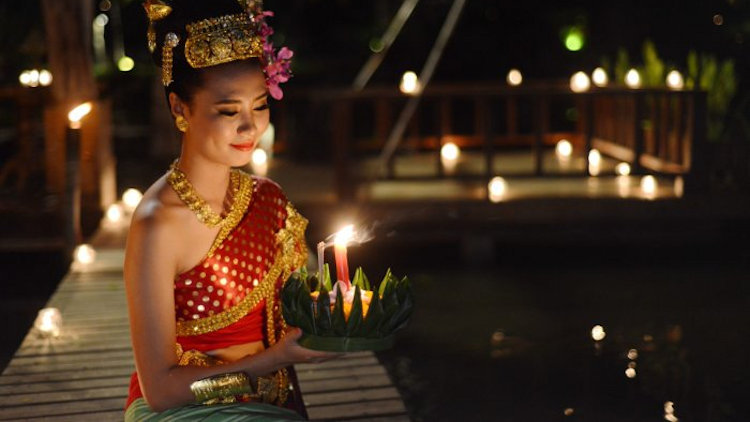 Glimmering lights, fun-filled revelry, and new beginnings - come November, Thailand is immersed in a festive spirit as people release krathongs (floating lamps made from banana trunk, banana leaves, flowers, candles, and incense) into rivers and lakes — a tradition of thanking and paying respect to the Goddess of Water. Loy Krathong also symbolizes bidding goodbye to past misfortunes, and receiving blessings and good fortune.

Chiang Mai is the center of the ‘festival of lights’ celebration, which takes on an added dimension of enchantment with Yi Ping that coincides with Loy Krathong. “Travelers can witness hundreds of kum loys (wish lanterns) released into the sky, in addition to the krathongs that are floated in the river,” explains Ashok Nair, Director of Experiences.

For three days, Chiang Mai comes alive with sound and light shows, local performances, craft workshops, temple fairs and traditional games. Guests can also witness large groups of monks who gather at temples to chant together during this festival. The grand Krathong Parade is the highlight, with traditional costume-clad locals offering a glimpse into the country’s fascinating legend and present-day culture.

Northern Thai people are known for their ritualistic way of life and this festival is a reminder of a few customs that are followed during Loy Krathong and Yi Ping. “The local community in Northern Thailand visit Buddhist temples to light bee wax lamps that are made especially for the festival,” shares Ashok, “They are particular about the tradition of clipping their nails and cutting a small piece of their hair to place in the krathongs before floating it in the river. This superstition is believed to help ward off misfortunes of the past.”

“Guests staying at Four Seasons Resort Chiang Mai can experience Loy Krathong and Yi Ping in unique style with a special package,” shares Ashok, “Learn to handcraft Krathongs, then take a limousine ride into Chiang Mai town to join the lively local celebrations with an English-speaking guide to partake in the local celebrations, including the Krathong Parade.” Witness the breath-taking sight of glowing lights rising into the night sky and floating down the river from the best spot.

On November 13, guests can savor a traditional Lanna-style dinner with interactive live stations, traditional music and dance performances, followed by floating krathongs in the Resort’s lake.