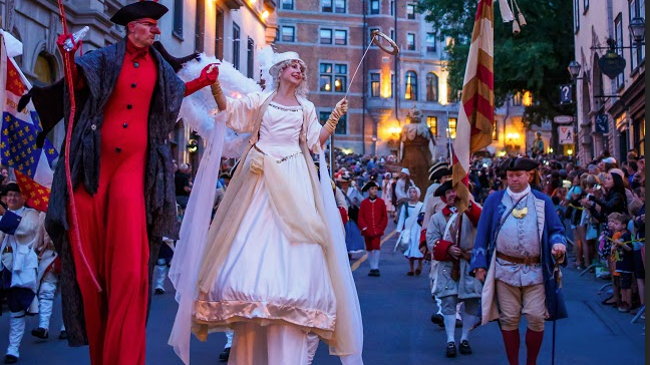 The festival will feature over 400 shows, with 200 artists performing in Old Québec, mainly at the Fortifications of Québec National Historic Site, which is designated UNESCO World Heritage Site.

The New France Festival welcomes over 200,000 visitors each year to rejoice in gastronomical activities, historic reenactments, and take part in historic lectures, showcasing with humor the 17th and 18th century period when Québec was a French colony.

• Flavor's Market for foodies: Themed gourmet experiences, barbecues and local produce will be available for food lovers at the Flavor's Market. Visitors will get a chance to sample food delicacies inspired from Huron-Wendat, the Celtic era and Acadia;

• Music shows at the TD Stage for music lovers: Music is a major part of the festival, with a variety of concerts every night. This year visitors can enjoy performances by Sally Folk, Nicolas Pellerin et les Grands Hurleurs- proud winners of two “Traditional Album of the Year”, Félix Awards, La Volée D'Castors and many others. Further, Acadia and Senegal will perform during the International Francophonie Day celebrations on August 5th. From Acadia, visitors can enjoy performances by Joseph Edgar, Annie Blanchard and Arthur Comeau;

• The Opening Day parade- August 3, 7 pm - The Opening Day parade will feature a historical version of New France float, composed of ships on wheels. These new structures will march alongside the traditional Giants – a parade of giant effigies.Visitors can rent period costumes in town and participate in the parade along with locals.