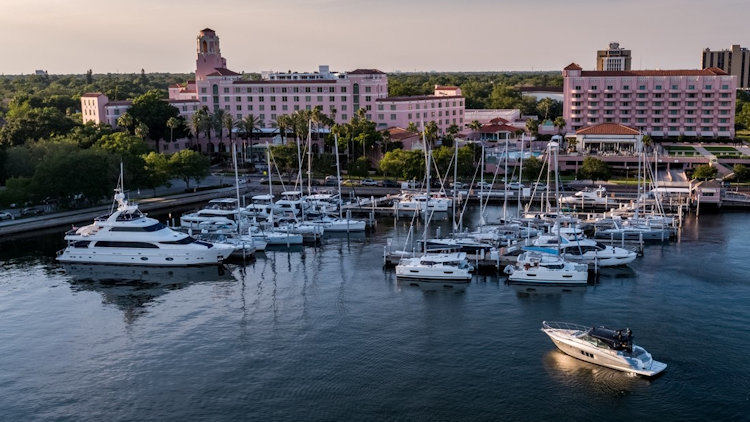 They say what goes around comes around, and as travel restrictions ease and the world once again embraces the exuberant spirit of the Roaring Twenties, travelers are itching for lavish vacations they may have skipped over the last couple of years—and what better place to take those vacations than in hotels built in the 1920s.

We've listed a selection of 1920s-era hotels below to commemorate the iconic decade of 100 years ago.

In true “Roaring Twenties” fashion, The Vinoy opened with a bang on New Year’s Eve of 1925 and quickly became beloved by Hollywood celebrities, famous athletes and U.S. Presidents looking for a luxurious escape to St. Petersburg, FL. Nearly a century later, The Vinoy still embraces its Old Florida grandeur with its Mediterranean Revival design, two outdoor pools, private marina and championship-grade golf course. The resort is also in the midst of renovations that preserve its timeless architectural details, including the signature pink façade, pecky cypress wood beams in the Grand Lobby and iconic veranda, while adding refined, contemporary features that will ensure The Vinoy’s rich legacy on downtown St. Pete’s waterfront for decades to come.

Built within Bristol’s original 1925 architectural landmarks, The Bristol Hotel is a historic restoration of the city’s former downtown Executive Plaza building which once housed the offices of many local, family-run businesses throughout the 20th century. The 65-room repurposed property is the first boutique hotel in the city and features historic design elements from the 1920s such as exposed brick with original pressed lettering, the building’s former hand-crank elevator displayed in the lobby and Roman-arched entryways. To tell the story of Bristol’s rich industrial history, locally inspired design elements aim to reflect the town’s four major industries of wood, glass, metal, denim and leather.

Situated within Midtown Manhattan travelers will find the ultimate old-school NYC glamour hotel, InterContinental New York Barclay. The hotel opened its doors in 1926, originally as part of Grand Central’s urban design plan and has been intertwined with the city’s vibrant history ever since. The Barclay exudes a 1920s feel amongst modern-day luxury, converging its Federalist-style décor, classic furnishing and contemporary comfort. Guests can be transported back to the roaring ’20s within the hotel’s restaurant and bar, The Parlour, and enjoy unique cocktails and small bites while feeling like they’re in the back of a 1920s saloon. Enhancing this ambiance, every Wednesday the hotel offers Jazzy Wednesdays where Café Society performs music from the Great American Song book within The Parlour.

Opened in November of 2021, Esmé Miami Beach is a charming Spanish oasis located on Española Way, South Beach’s historic esplanade that’s lined with local restaurants and shops. Originally developed as a 1920s artist colony and serving as the go-to hangout for gangsters like Al Capone and stars such as Lucille Ball, this Miami Beach hidden gem recently underwent a $40 million five-year renovation and opening led by the esteemed Infinity Hospitality Group and transforming the “bohemian village” into a boutique hotel. Additionally, the hotel features five Latin-inspired food & beverage concepts across its eight buildings, connected by intimate Spanish paseos. These concepts are led by Miami's most innovative restaurateurs, Lost Boy & Co. co-founder Chris Hudnall and Chef Fabian DiPaolo. From El Salón, an intimate cocktail lounge that exclusively features a proprietary collection of spirit blends to Bar Pintxo, a tapas concept inspired by Basque Country, each eatery brings an epicurean experience like no other to Miami.

With a gold-gilded lobby, three bars including the recently reopened Gold Room and a grand staircase that leads up to the Madison Avenue entrance and its iron-gated courtyard, Lotte New York Palace embodies the grandeur and opulence of the Gilded Age. Serving as the entrance to the hotel is the remarkably preserved Villard Mansion. Built in 1884, the Villard Mansion is one of only a handful of the Gilded Age mansions built on 5th Avenue (nicknamed Millionaire’s Row) that is preserved to this day.

In the evening, guests are transported to the opulent Gilded Age inside the two-story Renaissance-style Gold Room. Under dramatic gilt ceilings, walls and wainscoting, and a suspended balcony, built for times when the majestic space served as a music room, guests will enjoy craft cocktails with distinguished names like the Carnegie and Hemingway.

Located 40 minutes outside of Chicago, the Deer Path Inn is renowned for its rich history, which dates back as early as the 1800’s. Frozen in time to echo a rich English history, this original home was transformed into an inn, staying true to its inspiration and resembling one of England’s oldest villages, Kent. Deer Path Inn opened its doors to the public in 1929. After suffering a fire in the 1930’s that broke news around the country, the inn underwent impressive renovations and reopened their doors that same year. Today, Deer Path Inn features 57 recently renovated guestrooms and suites where guests can enjoy the epitome of modern-day luxury and classic English innkeeping traditions that transport guests 100 years back. At nearly a century old, Deer Path Inn has been added to the National Register of Historic Places and is also a member of The Historic Hotels of America.