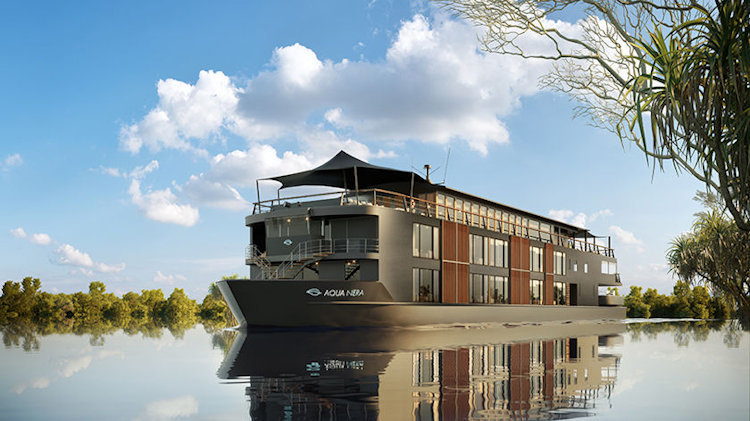 From her base in Iquitos in the Peruvian Amazon, the 20-cabin vessel has just completed her maiden voyage and can be booked for USD $359,000 per week, all-inclusive.

Aqua Nera is the most luxurious river vessel on the Amazon, the most biodiverse area on earth. Peru’s Pacaya Samiria National Reserve, where Aqua Nera offers exciting itineraries, is home to jaguars, pink river dolphins and 449 species of bird including white-throated toucans and capped herons. Her expert naturalist guides lead small groups on flooded forest encounters using four fast explorer skiffs. Other once-in-a-lifetime experiences include kayaking to a secret freshwater ‘swimming pool’ and mountain biking through an Amazon river town.

Aqua Nera was custom-made to cruise the Amazon. With low impact smokeless engines and a shallow draft of just 1.5m (5ft), she causes minimal disturbance and wake. Architectural agency Noor, who designed the Raffles Hotel in Angkor Wat and Furaveri in the Maldives, styled all 20 capacious suites with floor-to-ceiling windows that overlook a revolving Amazonian panorama.

The arrival of Aqua Nera is a story in itself. In July 2020 the 800 ton vessel departed her shipyard in Ho Chi Minh City for a 35-day transport through the Indian and Atlantic Oceans to the mouth of the Amazon. Here her owner, Francesco Galli Zugaro, took charge of the vessel during her 2,000km (1,200 mile) upstream voyage through Brazil to Peru.

Galli Zugaro states that: “Peru’s Pacaya Samiria National Reserve is inaccessible by road. That means we had to navigate Aqua Nera up the Amazon, which unleashes the discharge of the world’s next seven largest rivers combined. The logistics of the 15-day voyage were mind-boggling. But the chance to spot pink river dolphins and red-faced spider monkeys made it well worth it."

Sacha Williams, Camper & Nicholsons’ Charter Marketing Director, says that: “Francesco’s latest launch proves that he can place luxury vessels in the world’s hottest destinations, just as he did with Aqua Mekong in Cambodia and Vietnam in 2014 and Aqua Blu in Raja Ampat and the Spice Islands in 2019. They can all be chartered using Camper & Nicholsons brokers alongside a dozen other explorer yachts from the Arctic to the Indian Ocean.”