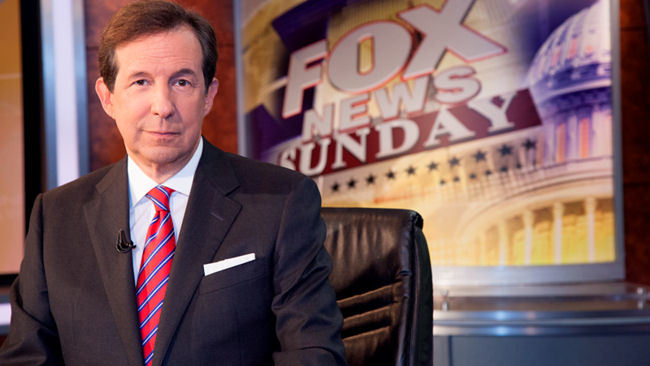 Current host, Chris Wallace has anchored for the last 13 years after taking over for the late Tony Snow in 2003. Wallace is taking this occasion to reflect on the show's many moments over the past two decades during the middle of an unprecedented election.

FOX News Sunday is turning 20, do you have a favorite memory from the show over the years?

How much space do you have? I have had so many adventures during my time on Fox News Sunday. Getting chewed out by Bill Clinton. Traveling to Rome to cover the election of the Pope.

Interviewing Spain's Prime Minister in Madrid. Meeting politicians and voters on the campaign trail during each Presidential race. So often, I can't believe I am getting paid to do this.

Being the dean of the Sunday shows keeps you in DC on most weekends, do you have a favorite after-show spot to eat?

My favorite is to go home where my wife Lorraine cooks homemade soup, a tradition we call "Soup Sunday." In fact, she collected about 100 soup recipes and wrote a cookbook called "Mr. Sunday's Soups," which became a New York Times best seller.

But over the years, Washington has become a much more interesting place for food. Some of our favorite restaurants are Le Diplomate, Kapnos Taverna, the Pines of Rome, and Al Tiramisu.

You've visited cities and countries all over the world in your career, do any trips or places stand out to you?

I treasure some of the places I went as the Chief White House correspondent for NBC News covering President Reagan. In 1984, I travelled with him to China, when that country had still not fully opened up to Americans. I remember standing in Tiananmen Square with this lifelong Cold Warrior. I felt the same in 1988 going on the President's trip to Moscow for a summit with Mikhail Gorbachev.

But my most memorable trip was spending a week in Calcutta with Mother Teresa just after she won the Nobel Peace Prize. Whether you are religious or not, you could feel she lived on a higher spiritual plain.

This election cycle you've traveled to Cleveland, Detroit and Iowa to moderate GOP debates, which city has been your favorite?

I have a fond feeling about Des Moines and Iowa from years of covering the caucuses there. Iowans have a special place in Presidential campaigns, voting first, and they take it seriously.

Des Moines has also become a great town for food. One of my favorite restaurants in this country is the 801 Chophouse.

Is it true you once vacationed in Italy with George Clooney? What was that like?

Just exactly what you think it would be like spending 5 days with George Clooney at his villa on Lake Como. He could not have been more charming and interesting. The only problem is he knew more about politics than I did.

His home and hospitality were perfect. In late afternoon, he would take my wife Lorraine and me out on his motorboat to tour the lake and enjoy great cheese and prosciutto and bread and drink some Prosecco.

Where is your favorite place to travel when you aren't working?

There was a time when I loved to go on adventures--to the Mayan ruins in Mexico, or the Valley of the Kings in Egypt, or a great European capital like Paris or London.

But now, we love to rent a place--for the last few years, in Martha's Vineyard--and have our kids and grandkids come visit.

What are your must-haves when traveling?

I do not like roughing it. I want a warm shower, reliable TV so I can stay connected to the news, and a quiet comfortable room.

This election has been truly unpredictable, what do you think will happen next?

The excitement is no one knows. I am especially excited about the prospect of a contested GOP convention in Cleveland. I have read for years about multi-ballot conventions before I was born. But I have never lived through one. I can't wait.
Like Us
Facebook
Follow Us
Twitter
Follow us
Instagram