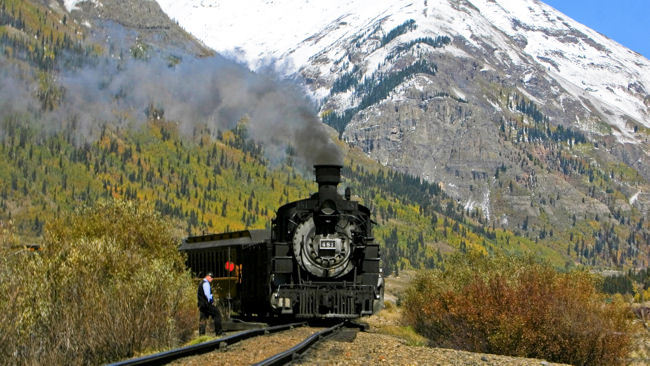 In fact, one can trace Colorado's vast history through its trains and railroads, from steam engines and luxurious antique passenger cars to 19th century narrow gauge railroads and a famous cog railway, taking passengers to areas where no other conveyance can. Following is a brief description of Colorado’s passenger railroads and trains.

The Durango & Silverton Narrow Gauge Railroad (pictured) debuted in 1892, after a top-secret expansion through the Animas Valley to the mining town of Silverton. The 45-mile railroad boasts vintage steam locomotives pulling a variety of rolling stock, including antique and open train cars, along the cliffs of the Animas River Gorge. The train, which also serves as the lone access route to Soaring Tree Top Adventures, a zip line tour, has been featured in several major motion pictures, including The Prestige, starring Scarlett Johansson. The railroad also houses a museum in Durango, where visitors can view restored vintage rail cars. Allow 3.5 hours for a one-way trip.

The Cripple Creek & Victor Narrow Gauge Railroad packs quite a bit of history into its four-mile route, which traces the path of the now-defunct Midland Terminal Railbed. Beginning at the Cripple Creek railroad depot, which was established in 1894, the railroad takes passengers along majestic Pikes Peak and former mining camps, where prospectors once sought to make their fortunes. The 45-minute trip also runs through Echo Valley, where passengers can hear the train’s whistle echo into the deep valley.

The Cumbres & Toltec Scenic Railroad is one of Colorado's most storied vintage railroad lines, having been in operation since 1880.This southern Colorado railroad boasts 64 miles of track featuring two tressles. The route takes passengers through two tunnels spanning more than a football field in length and past several of the railway’s original buildings, still in tact. Allow six hours for a one way trek, which runs from Antonito, Colorado to Chama, New Mexico.

Experience Colorado's Wine Country aboard a train that takes visitors from Denver to the vineyards of Colorado's Wine Country. Through a partnership with AAA, train passengers will enjoy spectacular scenery en route to western Colorado, from the Rocky Mountains to The Grand Mesa, the world’s largest flat top mountain. Included in the trip is a day-of-departure continental breakfast, two nights' accommodations in Grand Junction including daily breakfast, visits to several Grand Valley wineries, and a “Wine 101” seminar and tasting by a sommelier from a participating winery. Guests return to Denver via a luxury motorcoach.

The Georgetown Loop Railroad originally began operation in 1872, running from Denver to Idaho Springs. In 1938, the line was abandoned and then dismantled. It wasn’t until 1969, following an extensive restoration and modernization project, that the railroad began operation once again. The Georgetown Loop Railroad re-opened for full use in 1984, tracing its original 1872 route. In fact, the railway also benefitted from engineering advances not available when it was first in operation. The result is that the railway can now reach areas that were not possible in 1872, including Devil’s Gate High Bridge. Allow 1.5 hours for a one way ride; an optional 1.5-hour mine tour is also offered.

The Leadville & Company Southern Railroad follows a 22-mile route along old lines that were originally developed by now-defunct railroads. Beginning in Leadville, the highest incorporated city in the U.S., the route follows dramatic switchbacks along the upper Arkansas River Valley and passes along the Continental Divide. Popular in the summer and fall periods, where wildflowers and foliage are in their respective peak periods, the railroad’s route also passes Mount Elbert and Mount Massive, Colorado's two tallest peaks. Allow 2.5 hours round-trip.

The Pikes Peak Cog Railway, the highest train in the U.S., takes passengers 14,115 feet above sea level to the summit of Pikes Peak. It was here that Katharine Lee Bates, inspired by the “purple mountains’ majesty” of Pikes Peak, penned the words to a poem that eventually became the lyrics to the ubiquitous “America the Beautiful.” The cog railway, which combines a historic, nearly nine-mile route and a restored vintage station with modernized cars offering unparalleled views, takes a bit over three hours round-trip. This includes a stop at the Pikes Peak summit, where passengers can be inspired like Bates.

The Rio Grande Scenic Railroad is comprised of two separate railroads—the Toltec Limited and the San Luis Express—which, combined, span more than 100 miles. The two railroads criss-cross each other in the lush San Luis Valley and through the San Isabel National Forest. The railroad started out as a method of transporting supplies to otherwise impassable mining camps. Today, the railroad makes its way past these now-abandoned settlements, which were left intact and remain inaccessible by any other conveyance. Passengers will enjoy the amazing scenery, which also includes the Sangre de Cristo Mountains. Time varies by route and one way/round-trip options.

The Royal Gorge Route Railroad partly runs along a historic, 24-mile track in Cañon City, Colorado, which was carved out of rocky riverbed along the roaring Arkansas River. The modern locomotive offers conveniences and comforts while offering amazing scenery via panoramic-view cars that are open to the sheer, massive canyon walls. The high point of the trip—pun not intended—is the ride across the Royal Gorge Bridge, the second-highest suspension bridge in the world. Passengers get an unequaled view of the gorge, while riding nearly 1,000 feet above the churning Arkansas River. Allow 2.5 hours round-trip. An optional visit to the Royal Gorge Bridge and Park, an adventure park in Cañon City, is an excellent addition to the trip.

The California Zephyr operated by Amtrak is described as a spectacular, high-speed tour through the Rocky Mountains. The Zephyr, which boasts Vista Dome cars offering nearly unimpeded views of the landscape, operates on a 321-mile scenic stretch in Colorado making six stops: Fort Morgan, Denver, Fraser, Granby, Glenwood Springs, and Grand Junction. The Colorado portion is part of a 2,500 mile route from San Francisco to Chicago. The Zephyr also has an on-board “Trails & Rails” program operating between Denver and Grand Junction. “Trails and Rails” is an innovative partnership between Amtrak and the National Park Service, providing educational opportunities to passengers for the purpose of fostering appreciation of America's natural and cultural heritage.