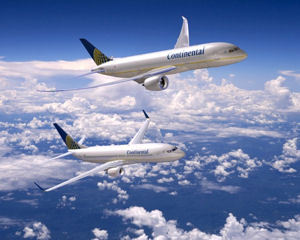 "We began designing this seat three years ago, involving our customers and numerous other experts to get it just right and I couldn't be more pleased with the end result," said Larry Kellner, chairman and chief executive officer of Continental Airlines. "This is a great seat and I am excited to see more of them on flights throughout our system."

Continental Airlines is the world's fifth largest airline. Continental, together with Continental Express and Continental Connection, has more than 2,400 daily departures throughout the Americas, Europe and Asia, serving 130 domestic and 132 international destinations. Continental is a member of Star Alliance, which provides access to more than 900 additional points in 169 countries via 24 other member airlines. With more than 41,000 employees, Continental has hubs serving New York, Houston, Cleveland and Guam, and together with its regional partners, carries approximately 63 million passengers per year.

Celebrating its 75th anniversary this year, Continental consistently earns awards and critical acclaim for both its operation and its corporate culture. For the sixth consecutive year, FORTUNE magazine named Continental the No. 1 World's Most Admired Airline on its 2009 list of World's Most Admired Companies. For more company information, go to www.continental.com.
Like Us
Facebook
Follow Us
Twitter
Follow us
Instagram