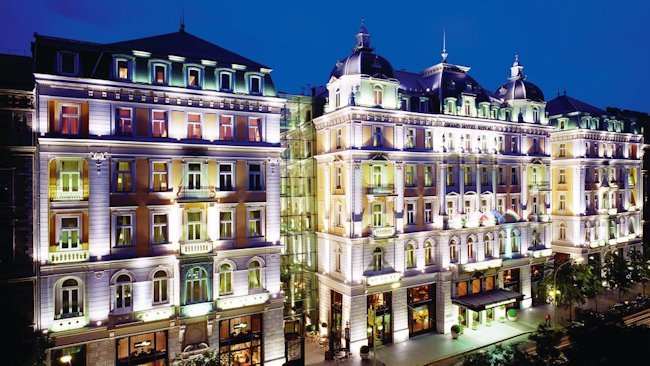 The buzz around Wes Anderson’s ‘The Grand Budapest Hotel’ has been firmly reinstated – as the movie ran away with four Oscars. DidAnderson perhaps get his inspiration for this enchanting hotel when he stayed at and did a back-of-house tour at Corinthia Hotel Budapest in 2012?

The Grand Hotel Royal was Europe’s first grand hotel and royal spa. The earliest filmmakers, the Lumière brothers, held their first cinematographic screening outside of Paris in Continental Europe, at the hotel in May 1896. In 1915, the Hotel’s Royal Ballroom was transformed into the Royal Apollo Cinema seating over 1,000 viewers. In 2002, the luxury Corinthia Hotel Group, painstakingly and elegantly, restored the original Grand Hotel Royal to its former glory.

‘The Grand Budapest Hotel’ package offers guests the unique chance to live the life of the 1930’s elite in a hotel originally opened in 1896 as the Grand Hotel Royal – one of the first European hotels feature en-suite bathrooms and electricity-operated lifts. Living like the social elite the hotel attracted in 1896, guests will be brought to the hotel in limousines. They will also get a tailor-made guided historical tour of this Grande Dame hotel, special room amenities – and of course the opportunity to watch this Wes Anderson’s award-winning movie within the walls of the hotel which inspired it.Having won (among many) Best Motion Picture at the Golden Globes and Best Original Screenplay at the BAFTA’s, there’s no better excuse to watch it now.

See below for full package details.

Package price is €409 ( approximately $465.38) for two nights for two people, inclusive/exclusive of 20% tax (with option to extend at a special rate). For reservations:
http://www.corinthia.com/hotels/budapest/offers/experience/grand-budapest-hotel/

The Corinthia Hotel Budapest’s remarkable similarities to the hotel behind

Though Wes Anderson maintains The Grand Hotel Budapest was an entirely fictional creation with no connection to the city, aspects of the history and architecture of the Corinthia Budapest betray uncanny similarities. Originally opened in 1896, under the name Grand Hotel Royal, the hotel was the most modern and elegant in nineteenth-century Europe. The similarities between hotel’s original façade, still in place today, and the façade of Anderson’s Grand Hotel Budapest, pictured above, also cannot be denied. The hotel has also long had strong ties with the film industry – the Lumière brothers screened their first motion picture on the European continent at the hotel, and the hotel’s ballroom was for a time converted into a cinema seating 1,000 people, called the Royal Apollo – renamed the Red Star Movie during the city’s Communist era.

Beyond the physical structure and even the historic connection with the film industry, the requests that head concierge Tamás Ungar has had to deal with in his time are entirely reminiscent of those of the film’s legendary Gustave H. And Tibor Meskál, who has worked at the hotel since the 1960’s, knows the hotel like nobody else.

· Accomodation for two for two nights (with the option to extend at special rate)
· The perfect movie night – watch the award-winning The Grand Budapest Hotel movie in your room with the perfect amenties to hand, including sparkling wine and sweets.
· A guided historical and movie-focused tour of Corinthia Hotel Budapest.
· Limousine transfer from and to the airport, with a personal welcome and mobile check-in at your room.
· A complimentary royal history book, as a long lasting memory of your stay.

· Offer is valid from 13/02/2015 to 30/08/2015.
· Offer is subject to availability and blackout dates may apply.
· Reservations must be guaranteed of credit card at time of booking.
· Rates are exclusive of VAT, City Tax.
· Offer is not valid for group bookings.
· Cancellations Policy: min. 72 hours before arrival. Late cancellation or no-show charge: 100% of 2 nights stay.
· Length of stay: 2 nights (with option to extend at special rate)
· Spa Policy: In order to keep the relaxing ambiance of our Spa, please note that children under the age of 16 are allowed to use the Royal Spa every day only between 11:00 am and 3:00 pm. Children under the age of 16 must be accompanied at all times by an adult who is competent in swimming. Thank you for your understanding.