To the Ends of the Earth in Antarctica 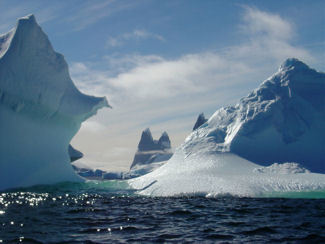 No one contemplates a trip to Antarctica lightly. It requires flights first to Buenos Aries and then to Ushuaia on the tip of Argentina, southernmost city on the planet. It requires the purchase of crampons for walking on ice and two and a half days of motoring across the Drake Passage, arguably the most notorious stretch of sea in nautical lore. Where does luxury fit into the picture? It begins and ends with the choice of a ship.

It is late afternoon when my husband and I board the Corinthian II, one of five luxury vessels among the twenty or so ships that challenge the world of glaciers and ice. We drop our carry-on bags in our oversized, wood-paneled suite and hurry back on deck. Several fellow passengers sport seasickness patches behind the ear, but the sea is tranquil and the air barely chilled. Ushuaia, nestled into the Andes, gradually fades behind gathering mists, and we retreat to the cozy cheer of the ship's lounge.

The first event is an informational meeting. We are introduced to the Corinthian's staff of first-rate naturalists who will offer lectures at sea and guide us ashore. International rules allow only 100 visitors per landing. Corinthian's small size (only 50 cabins recently expanded to 57) mean that each passenger will be able to disembark at every stop. There are no customs agents in Antarctica. No need for passports or visas, but the protocol for getting off and on is exact. An ice shelf is no place to be left behind!

We also meet our Swedish captain who looks reassuringly suited to life in the higher latitudes. (The resemblance to a certain St. Nick perhaps?) He offers a bottle of champagne as a prize to the first passenger to spot an iceberg. A few appraising glances are exchanged among the more competitive (myself included), but we are by in large a seasoned group more interested in pedagogy than playing. After a buffet dinner, the standard cruise variety show is replaced with a talk on penguin varieties (Chinstrap, Gento, and Adelie) and an opportunity for serious stargazing.

After twenty hours at sea, the first iceberg is sighted and the champagne claimed. Initially the berg appears as no more than a speck, and binoculars are needed for confirmation. Then another is spotted and another. The adults are as excited as the two youngsters aboard. A couple from Israel has brought their twelve-year-old daughter, and a French girl about the same age is accompanying her grandparents. Both are interested and engaged, but soon they go back inside along with the adults. What began as a prospect of near mythical scope becomes an hourly occurrence. Imagine not getting out of your chair for an iceberg whose visible tip is larger than a football field!

Every Antarctic itinerary changes with the weather. Our passage is so smooth we arrive early at Nelson Island in the Antarctic Archipelago. This is our first opportunity to try out our new gear (expedition parkas are provided) and ride the inflatable zodiacs to shore. Agility more than fitness is required. About a quarter of our fellow passengers are seniors, and they set a high standard with their spirit of adventure and uncomplaining attitude. Once on land, we can follow one of the staff or set out on our own. Seals lounge on the beach, and penguins hop along in their strange gait. They show little interest in us until we get close to their offspring -- that sets off an immediate and harried move in the opposite direction.

Our next stop is Elephant Island. Here in 1916 British explorer Ernest Shackleton and his crew survived the dead of winter and near starvation after losing their ship in the ice. Inevitably we think of the Corinthian's reinforced hull, bountiful meals, and elegant décor. Today brilliant skies are paired with stiff winds. The shore landing is cancelled and instead we pile back into the zodiacs for a closer looks at the elephant seals that give the island its name ... and the ice that only breaks free at the height of summer.

Petermann Island is also on our itinerary, and here we wake to that most rare of Antarctic phenomenon -- a warm, sunny day. My husband and I join a climb to an extraordinary outlook, shedding layers as we go. The continent has appeared in many guises over the past few days, from hauntingly mysterious to majestically desolate. In these few hours, it becomes our wonderland. I'm pondering the descent when our guide suddenly sits down and with feet out in front begins to slide down the slope. Who could resist following? No man-made ride compares! Back on the ship I take a final photo of the small research station that now serves as a museum / post office / gift shop. Behind and above it loom two million years of glacier.

Our final stop, Deception Island, is popular with cruise ships small enough to pass through the narrow entrance into Pendulum Cove, the island's protected anchorage. We wait our turn while another vessel finishes its shore excursion. This extraordinary island is the tip of an active volcano. We are invited to bring towels and wear bathing suits under our parkas (which have returned along with the clouds.) When we land, shovels are used to dig along the water line. Geo-thermally heated water seeps up into the indents creating (we are told) a jacuzzi. For those eager to swim in the Southern Ocean, the moment has arrived.

Wind and waves rise as we begin our return passage, but then it is over and we are safely back in Ushuaia. As we prepare to disembark I find myself along side our expedition leader. His seniority permits him to choose trips all over the world, yet he returns again and again to Antarctica. I ask him why. "The sense of awe is unrivaled," he replies. Now having been there, I agree.