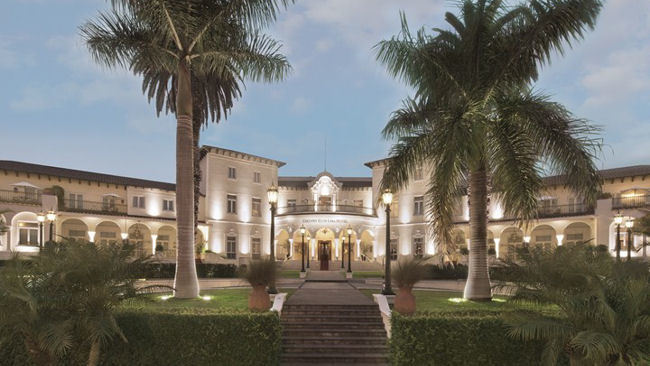 The project was overseen by Argentinian interior design architect Francisco López Bustos, who has been credited for his work at the Teatro Colón in Buenos Aires, the Llao Llao hotel in Bariloche and more. The redesign marries a cosmopolitan and sophisticated design aesthetic with the cultural richness of Peruvian traditions, bringing Lima a new classic hotel that meets the demands of the modern traveler.

The history of Country Club Lima Hotel is linked intimately with the development and splendor of Lima, one of the most vibrant cities in South America. Situated in the prestigious San Isidro neighborhood of Lima, the hotel has been the preferred address of affluent residents and globe-trotting travelers for nine decades. The updated design elements respect the hotel's admired architecture while delivering new standards of comfort and elegance for guests.

The most dramatic updates can be admired in the hotel's 83 guest rooms and suites. Large murals serve as the focal point of each room and were crafted by popular Peruvian artist Gihan Tubbeh. The leather-upholstered, monochromatic murals are photos of looms and Andean polleras common in the destination, and were digitally enhanced to add rich textural details and intense pops of color. These new designs join the more than 300 pieces of art on loan from the Pedro de Osma Museum, which are displayed throughout the hotel in public spaces and guestrooms.

Other enhancements made to guestrooms include new furnishings, lighting and textiles, incorporating dark woods, light leathers and a range of light-weight fabrics. The color palette follows existing tonalities of ocher, earth and corn, with accents of intense chromatics. The hotel's public spaces, including the award-winning Perroquet Restaurant, meeting spaces, fitness facilities, hotel pool and corridors were also modernized. In light of the hotel's extensive restoration, the Country Club Lima Hotel website was also redesigned to mirror the rich yet modern aesthetic of the property.

The building that now houses Country Club Lima Hotel was built in 1927. In its early years, the Country Club was a popular polo and golf destination for British viceroys and aristocracy, including the former Duke of Windsor Edward VIII. It was also frequented by famed literaries, including Nobel Prize winners Ernest Hemingway and William Faulkner and Peruvian writer Alfredo Bryce Echenique, as well as celebrities such as John Wayne, Nelson Rockefeller, Ava Gardner and more. In 1997 the building was purchased by new owners, who carried out extensive renovations to turn the Country Club into the five-star hotel it is today.

A member of Signature Travel Network, Leading Hotels of the World, Virtuoso and Ensemble Travel Network, the hotel's standard rates start at $259 per night. For more information about Country Club Lima Hotel or to book a reservation, contact +(51-1) 611-9000 or visit www.countryclublimahotel.com/home