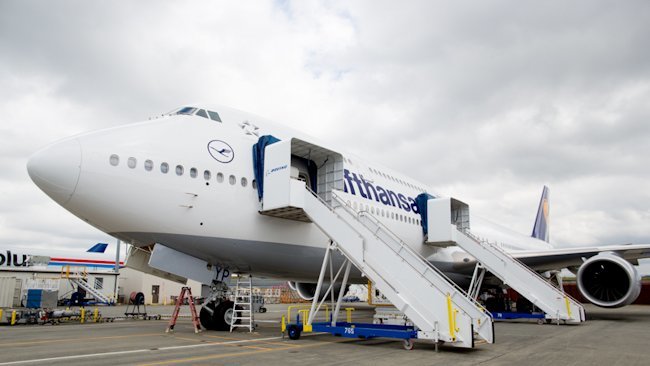 This aircraft, whose tail number is D-ABYP (“Yankee Papa”), is the 1,500th jumbo built in the world.

“It’s an honor for Lufthansa that the anniversary jumbo will fly in the colors of the Lufthansa crane,” said Nico Buchholz, Head of Group Fleet Management at Deutsche Lufthansa AG. “For decades, Lufthansa has been one of the aircraft manufacturer’s closest advisers – a pioneer when it comes to developing new, environmentally-friendly and fuel-efficient aircraft,” added Buchholz at the handover in Seattle.

Lufthansa is expecting to receive a total of 19 aircraft of this type, and will therefore be the world’s largest operator of 747-8s among passenger airlines. The “Dash 8”, as it is also known, has plenty to offer. By using the latest jumbo, Lufthansa is taking a further step towards having a “three-liter fleet” (per passenger and 100 kilometers). The aircraft is 15 percent more fuel-efficient than its predecessor model and, as a result, its CO2 emissions are around 15 percent lower. The noise footprint of the B747-8 is 30 percent smaller compared with the older Boeing 747-400.

What started as the first training flight with the new Boeing 747 over the mountains east of Seattle in October 1969, went on to become an icon of the Lufthansa fleet, and indeed, of commercial aviation as a whole. On March 9, 1970, the current Lufthansa CEO Herbert Culmann took delivery of the first Lufthansa Boeing 747-130 in front of the factory in Everett. The aircraft’s production number was 12 and its Lufthansa registration was D-ABYA.

Lufthansa thereby became the second international airline, after PanAm, and the first European carrier to deploy the jumbo on scheduled services. The aircraft was host to several major world premières in succession, including the first film shown on board a jumbo jet. Only twenty months after the maiden flight of the Boeing 747-130, the fourth Lufthansa jumbo took off on April 2, 1971 as a modified model. Boeing had equipped the 747-200 with larger fuel tanks and a higher take-off weight of 378 tons. This meant that the aircraft had a longer range.

Originally intended as a military aircraft, the jumbo’s career was not limited to carrying passengers. On April 10, 1972, Lufthansa received the world’s first “smiling” Boeing as the launch customer of the cargo version, the Boeing 747-230F. The nose of the aircraft could be opened horizontally, making it possible to load even bulk goods without any problem.

On April 19, 1972, the world’s first cargo jumbo took off, bearing the tail number D-ABYE. This quickly catapulted Lufthansa to number one in airfreight transport.

“A step towards the 1990s’ is how Lufthansa CEO Heinz Ruhnau described the purchase agreement signed on June 23, 1986, for an initial order of six enhanced Boeing aircraft. Lufthansa had already been involved in the planning of the Boeing 747-100. However, as the first airline to order the “Dash 400” (Boeing 747-400), it now played a key part in the development of the new aircraft, providing many hundreds of suggestions for improvements and more than 20,000 engineer hours.

With this aircraft, the modern, digitalized two-man cockpit that Jürgen Weber, the man responsible for aircraft development at Lufthansa Technik in Hamburg at the time and later Chairman of the Executive Board and CEO of Lufthansa AG, and Reinhard Abraham, the former Chief Technical Officer of the Lufthansa Group, had worked to achieve, became a reality.

Upwards-pointing winglets, new and more economical engines, new materials such as composite materials and aluminum alloys: all of these innovations helped to cut fuel consumption by 24 percent compared with the -200 series. On May 23, 1989, Lufthansa received the first enhanced super jumbo with tail number D-ABVA. The aircraft could cover almost 13,000 kilometers in 16 hours and thus reach nearly every destination in the world.

As the new millennium started, the idea was put forth to develop an enhanced version of the Boeing 747-400. And so not only was the jumbo extended by 18 feet and 4.5 inches 5.6 meters, it was also totally redeveloped, including a new wing design and new engines. On May 2, 2012, Lufthansa became the first passenger airline in the world to receive a Boeing 747-8.