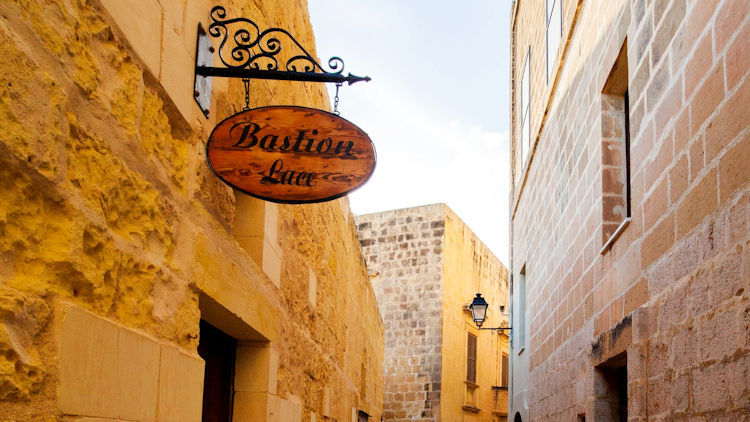 Located in the heart of the Mediterranean, Malta, has always been rich with traditional local crafts. These crafts are highly valued in the local culture of the Maltese Islands. Some crafts, such as lace making and basketware, have been around in Malta for thousands of years.

Weaving, embroidery and lace-making were often encouraged by the Church. Life in Gozo, one of Malta’s sister islands, and much of rural Malta was relatively harsh and craft industries became a main source of income for rural families. A craft that flourished under the Knights was gold and silverware. Malta's most precious production is filigree and jewelry. Today, Maltese goldsmiths are thriving, their work often exported to major cities abroad.

Back in the 16th century, pillow lacing was invented in the city of Genoa, Italy. In 1640, the Order of St. John introduced lace to Malta. A significant increase in lace makers was needed due to the high demand by Knights, clergy and members of the Maltese aristocracy. It continued to prosper until the end of the 18th century, when the Maltese islands were conquered by Napoleon Bonaparte. During this time, lace making nearly died out. But thanks to Lady Hamilton Chichester, who took an interest in Maltese lace, revived lace making. During the 19th century, a piece of lace from Genoa was given to a Gozitan woman by a clergy member, she studied the lace pattern and did her best to copy it. She taught herself, her sisters and friends in order to birth the skill of lace making in Gozo. It became popular among Gozitan women and girls, as well as clergy members. The lace they made was used to enrich the sacred vestments and church decor. During the Great Exhibition in London in 1851, Maltese lace was first exhibited. At this event, Prince Albert showcased an assortment of artistic and scientific interests from all over the world.

Since Maltese lace was exported across Europe, as far as India and China, mothers, daughters and all other family members, including boys, mass-produced lace on commission for both the local and foreign industries.

Maltese lace, or ‘il-bizzilla’, is one of the oldest and most esteemed traditions in Malta. Though it is made typically from Spanish silk, the symbolic Maltese cross embedded into the lace pattern is what makes it unique. Maltese lace is the name of a continuous technique called “‘bobbin lace’ or ‘bobbin lace making’, which refers to how the Maltese lace is made by using bobbins, which are small wooden ‘sticks’ made typically  of fruit tree wood. Visitors should not miss out on the opportunity to see these local lacemakers when strolling through the streets of Gozo or visit Ta’ Qali Crafts Village, which has become an important tourist attraction.

A craft that really flourished under the Knights was gold and silver ware. Malta's most precious production is filigree and jewellery. Filigree is a delicate adornment in which thin threads of gold or silver are twisted into a design and then are patched onto the jewellery. The craft of filigree traces all the way back to ancient Egypt and the Phoenicians spread this technique to Malta and throughout the Mediterranean.

Local Maltese craftsmen have made filigree their own by using the eight pointed cross, a notable symbol found in different variations, with gems, gold or silver, and on bracelets, rings, and earrings. Most jewellery shops around Malta and Gozo sell filigree, but experiencing the craft made in person right then and there is an enchanting process to watch.  Visitors should not miss visiting the Ta’ Qali Crafts Village, for an opportunity to purchase a piece of Maltese heritage.

Fishermen still use the colorful wooden Maltese boats called “Luzzu.” In every luzzu there is an engraved pair of eyes on the front of the boat. These eyes are believed to be a modern survival of an old Phoenician tradition and normally referred to as the Eye of Osiris, the Phoenician’s god of protection from evil.

The picturesque fishing village of Marsaxlokk is famous for its harbor filled with Luzzu’s, great seafood restaurants, and for the Sunday Fish and Souvenir Market. Luzzu are also available to take visitors out to explore more of Malta’s historic coastline as well as go deep sea fishing

The sunny islands of Malta, in the middle of the Mediterranean Sea, are home to a most remarkable concentration of intact built heritage, including the highest density of UNESCO World Heritage Sites in any nation-state anywhere.  Valletta built by the proud Knights of St. John is one of the UNESCO sights and the European Capital of Culture for 2018. Malta's patrimony in stone ranges from the oldest free-standing stone architecture in the world, to one of the British Empire's most formidable defensive systems, and includes a rich mix of domestic, religious, and military architecture from the ancient, medieval, and early modern periods. With superbly sunny weather, attractive beaches, a thriving nightlife, and 7,000 years of intriguing history, there is a great deal to see and do. For more information on Malta, visit www.visitmalta.com.