Doha, Qatar: 25 Things Not to Miss 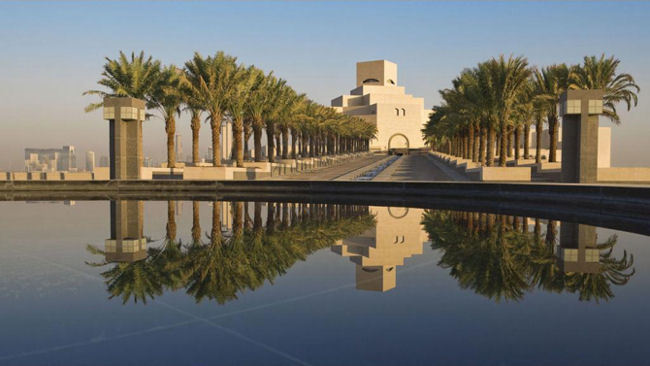 2. SOUK WAQIF
With its winding laneways and tiny stalls crammed with everything from spices and antiques jewelry to colorful textiles. Souk Waqif is one of the most atmospheric places in Doha – if not the Middle East.

3. DESERT SAFARI
An abundance of tour companies offer the adventurous 4x4 excursion known as ‘dune bashing' in Doha. The best spot is at the Inland Sea, or Khor al-Adaid as it is locally known – a desert meeting the channel of water between Qatar and Saudi Arabia.

4. THE CORNICHE
The Corniche, a the wide, palm-tree-lined footpath hugging the bay of the Arabian Gulf is arguably the most picturesque and beautiful in the Middle East. The walk gives the opportunity to take in the Doha skyline, the dhow wharf and the iconic pearl in the oyster monument.

5. CRUISES & WATER SPORTS
There is plenty of opportunity for cruising and water sports during your visit. Many firms offer windsurfers and dinghies for rent as well as sailing classes for novices. There are also plenty of pedal boats and parasailing activities. You can also hop on board one of the public dhows (traditional wooden Arab vessels) to take in the sights.

6. SHISHA
Smoking a shisha pipe is an important part of socializing for locals in Qatar. For a traditional shisha experience, try Al Bustan Tent, a smoky den of comfy sofas and tables under a canvas Arabic tent.

7. NIGHTLIFE
While there are no independent clubs in Doha, there is no shortage of places to dance the night away. Most of Doha's larger hotels have a night club. Two of the slickest bars in town are the Skyview Bar at the La Cigale Hotel and the W Hotel Crystal Lounge.

10. AL MARKHIYA GALLERY
Located within the Souk Waqif area, this gallery focuses on promoting and exhibiting the works of aspiring Qatari, as well as other Middle Eastern artist. Regular exhibitions are held, featuring a variety of media including painting, sculpture, calligraphy, and photography.

11. JABAL AL JASSASSIYA PETROGLYPHS
Located near the coast just 45 minutes outside of Doha, the rocky ridge at Al Jassassiya is the site of the mysterious petroglyphs (carvings) – a collection of rare symbols carved into the stone thought to date back several thousand years. More than 900 of these carvings were first catalogued in 1974.

12. BEACHES
The waters of the Arabian Gulf embrace most of Qatar, with the coastline extending some 560km. Some beaches, such as Khor Al Adaid (or the Inland Sea) are only accessible in a four-wheel-drive vehicle while others like Al Wakra are close enough to drive to or for an afternoon stroll.

13. AL KOOT FORT
Qatar has numerous old forts and towers across the land, which provides visitors with an insight into the beautiful culture and heritage of the country. Some of these heritage sites have been partially restored while others exist as ruins or excavation sites. Al Koot Fort, set in the heart of Doha city, close to Souq Waqif, this Moorish-style fort was built in 1880 on what was then the outskirts of Doha.

14. FANAR MOSQUE
Fanar is Qatar's modern Islamic Cultural Center. The building with its beautiful minaret which was inspired by the 9th Century Great Mosque of Samaraa's minaret, is located on Doha's Corniche. The center offers non-Muslims the opportunity to learn more about Islam through various activities including Arabic language and other educational courses.

15. SINGING SAND DUNES
Since ancient times these have been tales of strange, low-pitched sounds being heard in the desert. This fascinating natural phenomenon is a result of the friction caused when a thin layer of sand is blown down the leeward side of the dune.

16. ORYX FARM (SANCTUARY)
At the nature reserve in Al Sheehaniya, visitors can view the Arabian Oryx, the national animal of Qatar, up closeOnce threatened by extinction, the Oryx now live and breed as protected herds in Qatar, and the farm at Al Sheehaniya is home to one of the largest herds.

17. CAMEL RACES
Camels have been revered in Qatar since historical times when the Bedouin used the animals for transportation, as well as for food and milk. The racetrack in Al-Sheehaniya, a 30-minute drive to the west of Doha, provides visitors with an opportunity to see the animals in one of the most popular sports in the Middle East. Racing season begins in October and runs through March.

18. AL SHAQAB STUD
Owned by the Emir, Sheikh Hamad bin Khalifa Al Thani, this farm provides the opportunity for viewing some of the highest quality thoroughbred Arabian horses, many which are world champions. Located in old Rayyan, the stud has world-class facilities to care for the horses.

19. AL ZUBARA TOWN
Between 1775 and 1780, an attack by the Persians on Basra, coupled with an outbreak of the plague forced merchant families to flea southern Iraq and settle in the walled city of Al Zubara. The fortress city was destroyed in a siege in 1878. Archaeological excavations on the 54-hectare site are ongoing and the foundations of the city walls have been uncovered, revealing the bases of numerous watchtowers, residential dwellings and artifacts.

20. THE PEARL
Nicknamed the Arabian Riviera, the Pearl is a series of interconnected islands. Much of the Pearl is still under construction but the initial segment, Porto Arabia, is open to the public to view. Porto Arabia is setting the standard with high-end dining, shopping and residential facilities and the impressive Maze restaurant with Michelin Star chef Gordon Ramsay's creations, or charter a yacht to take in the views.

21. KATARA
Katara is a prestigious project that brings together culture, arts and cuisines from different countries on its 99 hectare site on the seashore just before The Pearl. Having opened in 2010, Katara Cultural Village houses an opera house, galleries, museums and Doha's first public beach. With spectacular architectural works, including a colosseum-like amphitheater and several restaurants and cafes clustered around the beachfront and main promenade.

22. SHOPPING
The exciting blend of traditional and modern shopping facilities makes Qatar an attractive destination for avid shoppers. Landmark Mall, designed in the style of a Qatari castle is a popular location, hosting a number of events and during special occasions and festivals (like Eid) there is plenty of family entertainment beyond retail therapy.

23. ASPIRE PARK/PLAY PARK
This massive park, with its striking baobab trees, covers more than 88 hectares and is Doha's largest park. It has a large lake, shaded seating areas, horse riding trails, a jogging track and a restaurant. There are also plenty of paved areas that are perfect for cycling and roller-skating.

24. SPORTS EVENTS
After successfully hosting the 15th Asian Games in 2006, Qatar is now preparing from hosting the 2022 FIFA World Cup. Besides football and the Olympics, Qatar hosts many annual tournaments including Sony Ericsson Women's Championships tennis tournament in October and ExxonMobil Qatar Tennis Open in January.

25. LOSAIL MOTOR RACING CIRCUIT
The brand new Losail motor racing circuit outside Doha is the venue for the Qatar Commercialbank Grand, a leg of the MotoGP World Championship in April. The circuit also hosts the Losail National Cup. Pro and amateur drivers and riders have plenty of opportunities to scorch the Losail track during the Track Days between September – November where the circuit is open to the public on selected days.
Like Us
Facebook
Follow Us
Twitter
Follow us
Instagram