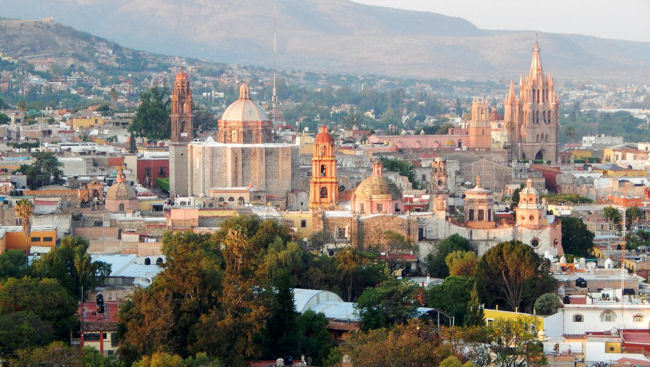 My first impression upon entering the city is of steep hillsides swathed with small dwellings, each a different color, like thousands of rainbows superimposed one on top of the other. As Jonas Mekas so aptly put it, “you cannot…see all those colors and remain angry.” He was right. In fact, here in this wondrous little town, happiness is the name of the game – and I cannot wait to play!

Located in the far eastern part of the state of Guanajuato, San Miguel de Allende dates from 1542 and is a three hour drive from Mexico City. It is the first municipality declared independent of Spanish rule during the Mexican War of Independence. In the late 1930s and 40s, the town began to attract artists and writers. One visitor, an artist and visionary, was the American Stirling Dickinson who visited in 1938 – and stayed. In 1940, he established the Instituto Allende. The Escuela de Bellas Artes was also established at that time. Enrollment at the schools rose quickly and thus began the town’s cultural creation. In turn, hotels, shops and restaurants opened to cater to the new visitors and residents; internationally-renowned San Miguel as we know it today was born, becoming a UNESCO World Heritage Site in 2008.

The historic center remains much as it was 250 years ago and, owing to its singular charm, many of the homes have been restored to their former colonial state with facades of ochre, yellow, fuchsia, violet, rose and turquoise; most are fronted with imposing, intricately carved wooden doors and the residents take great pride in having a spectacular, one-of-a-kind door to distinguish their home. The magic of this place, as well as its cultural and artistic reputation, has made San Miguel a sought-after international community; in fact, many publications have called it one of the top 10 retirement destinations.

Early one morning, I allowed myself to be carried up, up and away in a hot air balloon, sailing over housetops and causing the entire town’s canine population to begin crooning as we passed over their doggy digs. Seems that the sound of the propane jets drives them bonkers. Our balloon was, naturally, as bright and colorful as its surroundings, and Gretchen, the pilot of Globo San Miguel was a total professional; thus any trepidation I had about soaring skyward was quickly put to rest once I met her. Our lunch that day at the Nirvana Restaurant and Retreat was a luminous space in a leafy, secluded glade on the banks of the Rio Laja, complete with a pair of preening peacocks wandering the property. Under chef/owner Juan Carlos Escalante’s skilled eye, this was an ideal place to lunch and a satisfying reward after that early airborne adventure.

Still later another reward awaited me – a visit to Cuna de Tierra, San Miguel’s premiere vineyard, for some serious tastings. Designed by architects Ignacio Urquiza and Bernardo Quinzanos, a tour of the modern, sleek buildings was the prelude, if you will, to the tasting at a flower-bedecked table set with pretty pottery, tinkling crystal, cheeses, meats and just-baked bread. When we bid Mike Taylor, the sommelier, adieu, the sun was just sliding behind the mountains and the five imposing resident German Shepherds stood silhouetted against the scene. A special day.

But wait! The day was not yet over. There remained the matter of a horseback ride at dusk through the tiny streets of the town! Seriously? I, who do not ride horses, who find the mere thought of mounting a very large beast that I’ve never met before daunting and wildly adventurous. Oh yeah, that was the plan. Off we went, our group of 6, I on a horse named Lucky (good omen?). We were led by Rodrigo Landeros, Director of Coyote Canyon Adventures. High astride Lucky and in the hands of our tall, slender, impossibly handsome leader, I was thinking that this could work out just fine. Our ride took us past million-dollar haciendas, once again sending the city’s dogs into a cacophony of crazed cries. We found ourselves at a high promontory of the La Cruz de las Brujas mountains adorned with a towering cross as. just below, all the town’s lights twinkled on. Enchanting. Night fell and as luck (or Lucky) would have it, high above - a perfect full moon. Soon we rode into the heart of the town with twenty-four hooves clattering on cobblestones to the amusement of tourists and residents alike.

My horse was following close behind Rodrigo when up the hill came a large bus which his horse didn’t like – at all. He reared up on hind legs and that was enough to spook Lucky who began lurching this way and that and I could do nothing but hold on tight – and pray. Quickly Rodrigo got the situation under control. End of scare - except that I was just about ready to call it a day. I wanted off Lucky at that very moment. If I had to walk from town to my hotel, so be it. I’d had enough adventure for one day. One of the caballeros who accompanied our ride – Edgardo - to the rescue! He took hold of Lucky’s reins and led us all the way to the town square. Ahhhhh. I knew that I’d be ok because Edgardo would periodically turn around and give me his mega-watt, perfect smile. Did I mention that he, too, was drop-dead handsome? Well, he was. The ride ended as I sat happily atop Lucky and allowed myself to be serenaded by some fine mariachi musicians. Another horseback ride in the offing? Sign me up! 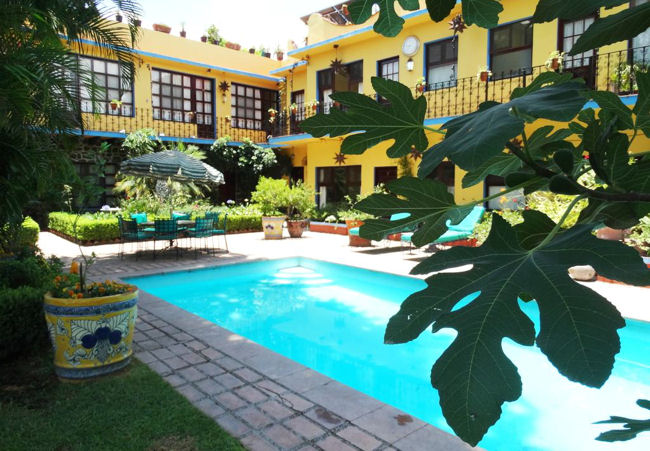 Put on a Happy Face

The next day we were off to Guanajuato, a city that is also the capital of the state of the same name and just an hour and a half from San Miguel de Allende. The origin of this city resulted from the discovery of gold and silver in the mountains surrounding it. The mines were so rich that the city was one of the most influential during the colonial period and was named a World Heritage Site in 1988. Guanajuato is...well…different, unique and special; thanks to the honor bestowed on it by UNESCO, its singular charm will remain unchanged.

The streets follow the extreme irregularity of the terrain with small alleyways and staircases that wind up steep hillsides, giving Guanajuato a distinctly European flavor. And, it is chock-a-block with tunnels, tunnels running under the entire town! Fair warning to claustrophobics: these tunnels are narrow, low, with lots of traffic and, I kid you not, parking lots. They are also surprisingly fun and definitely not to be missed. As Guanajuato is set in a narrow valley, the hills are alive with houses and these houses are – just like ones in San Miguel – painted in the most luscious colors imaginable. Dreaming in color again.

Our guide to the city was one Professor Salvador Santacruz - charming, with a deep, intimate knowledge of all things Guanajuato, and a delight to tool around town with. His love of this place was infectious. Our first stop on Prof. Santacruz’s tour, the Museo Diego Rivera. It was in this house that the painter was born and spent his early childhood. We saw splendid period furniture and other items from the late 19th century; also about 100 paintings of Rivera’s early, little-known works. The museum has workshops for the arts, literary events, film showings and other cultural activities.

On to another museum - the Mask Museum - named Another Face of Mexico. That it is. Curator Bill LaVasseur has spent more than 25 years acquiring an extraordinary collection of more than 600 Mexican ceremonial masks through his visits to remote indigenous communities. The museum opened in 2006 and is a mystical, enchanted place. In addition to wondrous masks, there are photos and videos showing more than 40 different dance ceremonies. All the masks in the collection have been worn in ethnic performances and thus considered authentic. Captivated by countless mask faces, both animal and human, I knew I had to take one home but how to choose the one? There were clown-like faces, sweet faces, truly scary faces. Finally in a corner I spied a dusky face of – what? A cow, a pig? I knew not but its eyes were piercing and its wide grin slightly mischievous. Yes, that was the one. It now hangs prominently on a wall in my den and we’ve become friends. It’s now a cherished memento of the Mask Museum, an experience like no other.

More adventures, this time atop an ATV swinging around the city, traversing numerous tunnels, hills, dales and up to the top of El Pipila Monument with a sweeping view of Guanajuato. The monument honors the hero who torched the city gates in 1810, ensuring the first victory of the independence movement. The statue shows El Pipila holding his torch high over the city. On the base is the inscription “There are still other gates to burn.” Coming down from the hilltop, we found out firsthand how very narrow were the streets and alleyways of Guanajuato. We were told that they are so tight that it’s not always possible to get through by car. Or by ATV, as was soon apparent. It seems that a few cars before us were stuck behind a minivan that was going nowhere – fast. It took Israel Ferro, my driver, and a few others to work some magic and push the vehicle through but not before we sat in the baking sun for about an hour. Yay Israel! 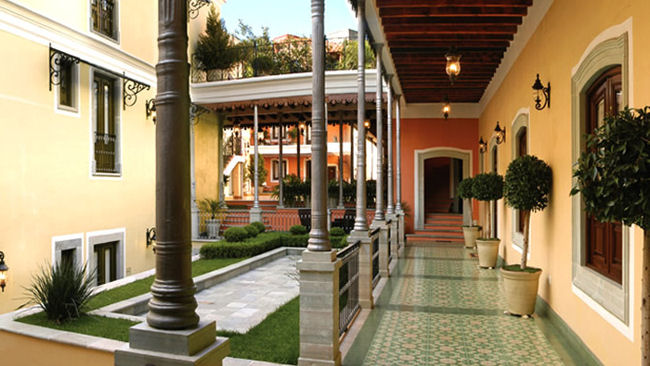 All Around The Town

We visited the handsome Teatro Juarez in the Jardin de la Union, a pretty park buzzing night and day with activity, people strolling, munching ice cream cones, or just relaxing on a bench people-watching. The theater is located near the striking San Diego Church in the city’s center and is considered one of the most beautiful buildings in the country. Neoclassical in style with a façade containing nine sculptures depicting the muses of Greek mythology, the auditorium has eclectic Arabesque details throughout. We learned that a ballet performance would be performed that very evening and we were lucky enough to score tickets. Artistic Director Mariella Messina directed works inspired from, among others, choreographers Petipa and Fokine; selections from Giselle, Swan Lake and Don Quixote were beautifully performed..

Later, we were a part of a pastime called callejoneadas – a roving party of students from the University of Guanajuato garbed in 13th century university dress, playing traditional instruments and serenading one and all as they paraded through the lanes with townsfolk trailing behind. The groups are called tuna and it’s done for fun and to preserve this ancient tradition.

Our last day – too soon. We were eagerly awaiting our visit to Chef Jonathan Martinez’s chocolate workshop and it didn’t disappoint. We sampled scores of chocolate nibbles filled with various delicacies. It was only once I’d popped a pretty offering into my mouth and totally enjoyed it that I was informed it contained grasshopper. Oh well, a first time for everything, right?

Checking into the Hotel Villa Maria Cristina, a Relais & Chateaux property, was sweet as well – the ideal spot to spend one’s last night. This luxurious estate is of the 18th century with walled gardens, reflecting pools, sprawling terraces and a spa that is nothing short of an indulgent oasis. Indulge I did in a sunken Roman pool and later was invigorated by a deluge of Swiss shower jets.

Adios Mexico. On second thought, no goodbyes; I prefer hasta la proxima – insuring that I’ll be back.