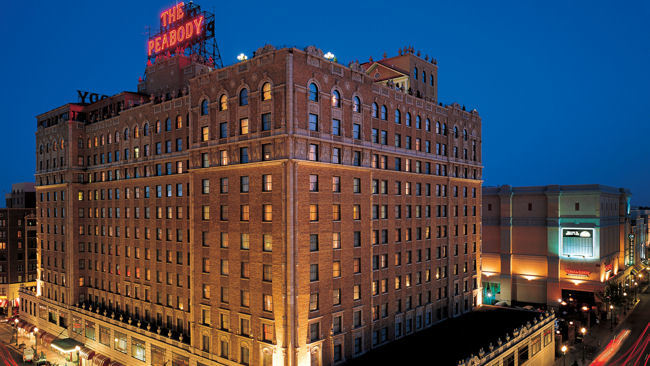 Consider our recent stay to attend the sixth annual induction ceremony for the Memphis Music Hall of Fame. Of course, we expected the popular event to draw musical heavyweights to the city, but we also knew many would likely be found in the Peabody’s elegant, soaring lobby, or even enjoying a meal on site. We weren’t disappointed.

The Peabody Memphis opened in 1869 on the corner of Main and Monroe. Following the original hotel’s teardown, a new, larger Peabody was built at its present location on Union Avenue, opening in 1925.

In 1935, newspaper man David Cohn captured the importance of The Peabody and its locale in his book “Where I Was Born and Raised” noting: “The Mississippi Delta begins in the lobby of The Peabody Hotel in Memphis and ends on Catfish Row in Vicksburg … if you stand near the fountain in the middle of the lobby… you will see everybody who is anybody in the Delta.”

It was true for us. Standing near the lobby fountain post induction ceremony, we spot long-bearded, sunglasses-at-night wearing Billy Gibbons of ZZ Top (that group being former inductees). A bevy of beauties surrounded the guitar man. The list of music stars, actors, politicians, industrial and banking magnates and dignitaries that have graced this hotel would go on for pages.

However, most know the Peabody for its ducks that parade twice daily across the lobby. We got the full scoop first-hand from Duckmaster Anthony Petrina’s one-hour hotel history tour following the morning march, which is held promptly at 11 a.m. every day.

Looking dapper in his bright-red, ringmaster-style jacket, he wields a dark cane topped with a brass duck head for herding the brood. Most unforgettable, besides his instant, broad smile, is a perfect, booming voice to announce – with appropriate pomp and circumstance — the morning arrival and 5 p.m. evening departure of the hotel’s most famous residents. Petrina loves his work.

How to best view the duck march? The afternoon march is most crowded, so reserving a table in advance is a good strategy. In case of standing room only, try to position near the elevator or on the upper mezzanine for the overhead view. There are special children’s lines nearest the red carpet with the wee ones sitting on the floor, duckside.

How this all started dates to 1933, a legend so honored that it’s printed on the bar napkins: “Back in the 19030s, Frank Schutt, general manager of the Peabody, and a friend, Chip Barwick, returned from a weekend hunting trip to Arkansas. The men had a little too much Tennessee sippin’ whiskey, and thought it would be funny to place some of their live duck decoys (legal for hunters to use back then) in the beautiful Peabody fountain.

“Three small English call ducks were selected as ‘guinea pigs,’ and the reaction was nothing short of enthusiastic. Thus began a Peabody tradition which was to become internationally famous.” 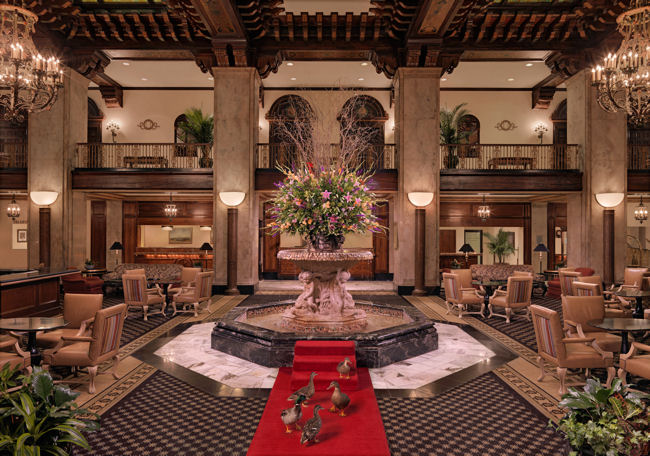 In 1940 Edward Pembroke, a Ringling Bros. and Barnum & Bailey wild animal trainer, became the hotel's first Duckmaster, rising from the rank of bellman. For the next 50 years he "mastered" the ducks as they marched into the lobby fountain to the sound of John Philip Sousa's “King Cotton March.”

The late Mr. Pembroke’s portrait hangs at one entrance to The Peabody, and one of the hotel’s luxury suites is named in his honor. (We posed for a photo with the portrait alongside current Duckmaster Petrina during his tour.)

Today, the five Mallard ducks, one male and four females, reside in the rooftop "Duck Palace." Their “penthouse” has a raised, green-turf covered area plus indoor pool. Visitors can view the birds through glass.

Just before the morning march, the ever-prompt Duckmaster leads his brood of five across the rooftop, which is open to the public unless in us for a private function. Using his cane and voice to coax all to fall in line, the ducks waddle into the elevator for their ride to the first floor and onto a red carpet that leads into the lobby fountain. The ceremony is reversed at 5 p.m., when the ducks return to their rooftop dwelling. The ducks call the fountain home for about three months, then are returned to a local farm where future Peabody marchers are raised. Retired ducks are welcome to return into the wild, but some, said Petrina, choose instead to hang around the farm pond.

At the daily march ritual, Petrina loudly proclaims the story of declaring no duck will ever be served on the menu of the hotel’s upscale Chez Philippe. We didn’t mind a bit as course after course of culinary creativity was placed before us, each a picture waiting. From an unforgettable mushroom Lyonnais salad of braised porcini, chanterelles, lobster mushrooms and wild board sauce to Scotch egg, bacon-stuff quail with fig caramel and brussel sprouts, the tasting menu was delightful. We highly recommend the Sole Almandine with marconia almonds, lump crabmeat and a beurre blanc sauce. The restaurant offers four or seven courses with our without wine pairing, but no a la carte entrees.

As to Peabody people watching, during our dinner, we only realized that the fellow diner across the room was songwriter/performer John Prine after we saw him on stage the following night at the Memphis Music Hall of Fame ceremony inducting the late “Cowboy” Jack Clement. 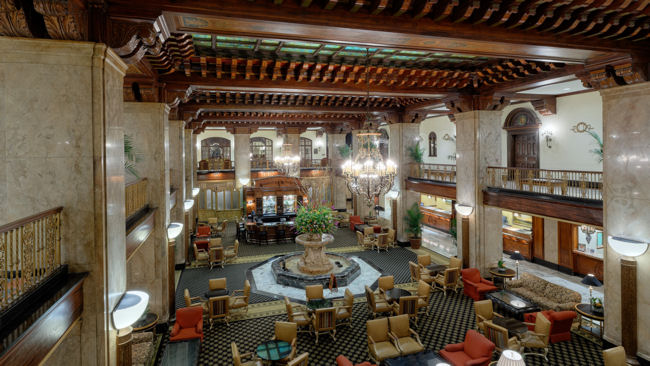 Once item of note in the memorabilia room on the upper level is a 1955 receipt on Peabody stationery for a $5,000 signing bonus with RCA signed by Elvis Presley and his father, Vernon. It sold at auction 44 years later for $65,000.

Elvis had long ties to the hotel dating back to his teenage years attending his senior prom here.

Today, he would no doubt love being able to slip into one of this favorite clothing stores: Lansky’s has a shop in the hotel lobby. The shop slogan “Clothier to the King” is a salute to the many memorable outfits the King of Rock n Roll sported from Lansky Brothers, including one for his first appearance on The Ed Sullivan Show. Photos of the King in the store, with the owner and in many of those clothes hang at all the Lansky’s locations. The original still stands at 126 Beale St., where owner Bernard Lansky greeted Elvis in 1952. After spotting the young man studying the store window, he offered this invitation: “Come on in and let me show you around.”

On the upper mezzanine, guests can view the square, rosewood grand piano custom-built for Francis Scott Key in 1838, which he used until his death. Here on the tour, Petrina invites guests to peer upward for a closer view of the stunning stained glass skylight, unearthed by workers during the hotel’s 1981 “rebirth.”

In a brief online history, The Peabody recounts its surprise discovery of that particular treasure.

“Bringing The Peabody back to its former glory would not be enough. What had been considered spacious, luxurious, and grand in 1925 would hardly meet the needs of the modern-day traveler. If they were going to restore anything, it was going to be the way people felt when they stayed at The Peabody.

“They began reconfiguring, enlarging, and enhancing the guest rooms. They modernized the plumbing, heating, and air-conditioning and, all new back-of-the-house technology and telephone systems were developed and installed. Room by room, the grand hotel grew grander.

“In the Grand Lobby, carpenters broke through what had been a false ceiling added by the previous owners. When the dust settled, the remnants of a once-magnificent stained-glass skylight were revealed. Employing the same techniques, wired glass and colored glazes used some 50 years before, a new skylight was designed true to the era of its origin. The renovation took four years and $25 million to complete–more than twice the original estimate and at four times the original cost.

Current visitors come to the hotel for many reasons, but for anyone staying here, it is a delightful trip into a magical past. The rooms are certainly modern, but in many offer a glimpse into how it might have been. The furniture is reminiscent of the past in its beautiful construction and attention to detail that equates to beauty. It’s fun to fantasize about how it may have been when Elvis stayed here, or a U.S. president. Jimmy Carter, for example, was an honorary Duckmaster as was UNC Chaple Hill basketball coach Roy Williams.

It is an historical building, that has been updated to modern comforts upscale travelers demand. The pool grotto is gorgeous and should be sampled, as should the spa. And yet the lobby remains the hub that engergizes this landmark. Just stopping in for a look or sipping a cocktail at the lobby bar on a Saturday night will not disappoint. The Peabody’s homage to ducks is everywhere – from soaps and covers on bath tissue rolls to duck-shaped cookies in the on-site deli and duck ornaments in the gift shop. Even our turn-down, welcome amenity was a white chocolate duck on a bright blue “pond.” 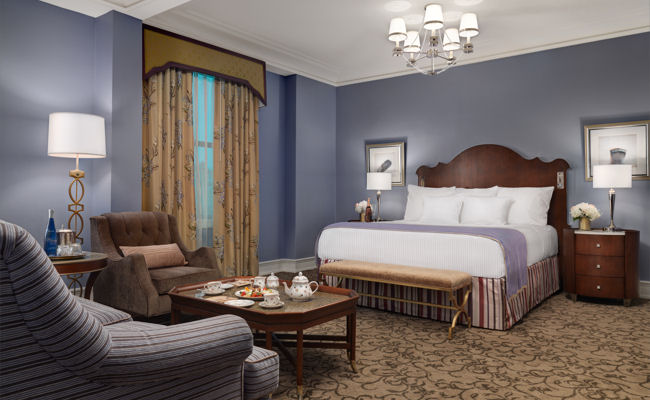 If You’re Going: Hall of Fame and More

The Memphis Music Hall of Fame is an offshoot of the Smithsonian-developed Memphis Rock ‘n’ Soul Museum, and both are a must for Memphis visitors wanting to bathe in the musical history here.

Add Stax and Sun Records, plus Graceland of course for even more music and memorabilia immersion. Plus there’s Beale Street and all that good ole blues and barbecue and more.

Absolutely don’t miss the National Civil Rights Museum at the Lorraine Hotel, where Martin Luther King Jr. was struck down by an assassin’s bullet. (April 4, 2018 is the 50-year anniversary.)

The Peabody is the perfect home base for all that and more as a notable member of Historic Hotels of America. It is also on the National Register of Historic Places and is a Mobil Four-Star and AAA Four-Diamond property.

Kathy M. Newbern and husband J.S. Fletcher are award-winning freelance travel journalists based in Raleigh, NC, who have visited 76 countries, all seven continents and reported on 73 cruises. They often incorporate their travels into their other business, www.YourNovel.com, where they put you and your sweetie in your own personalized romance novel "wild" or "mild."