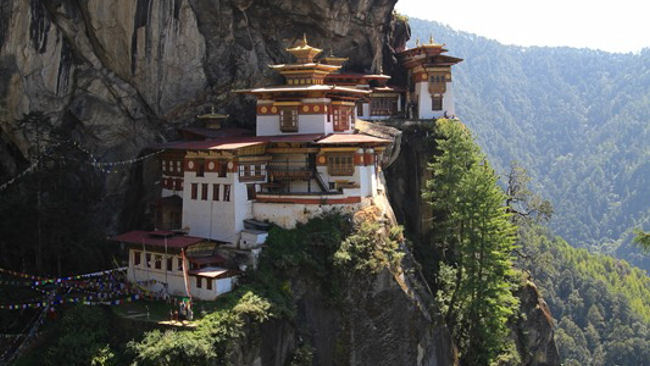 Today, an Asia-based tour operator has connected the dots on the wellsprings of the continent's most insightful doctrines to create an all-encompassing pilgrimage.

The new package from Exotic Voyages, The Razor's Edge: A Spiritual and Cultural Quest is a once-in-a-lifetime 111-day journey spanning 13 countries across Asia and the Middle East. The expedition's name is inspired by W. Somerset Maugham's 1944 novel, where the protagonist travels overseas in search of a deeper meaning to his existence.

“The Razor's Edge isn't really an opportunity for a holiday so much as it is a chance to make a major pivot or a pause,” said Andrew Carroll, global head of sales and marketing at Exotic Voyages. “It's the kind of journey you might just quit your job for.”

For those who want to retain that job, Exotic Voyages is also parceling out smaller segments. The package can be broken into multiple trips, taken over the course of a few years, or customized into a shorter tour based on the client's interests and available time.

The full itinerary covers: Oman, Sri Lanka, Nepal, Bhutan, India, Myanmar, Thailand, Laos, Cambodia, Vietnam, China, Korea, and Japan. In each destination a local guide leads guests to locations of cultural significance as well as spiritual destinations where guests can learn about and immerse themselves in the practices.

Some spiritual highlights include:

● In Thailand guests stay at Plum Village, a monastery founded by Zen Buddhist monk Thich Nhat Hanh, where they learn mindfulness meditation and take part in dharma talks.
● In China the intrepid trek with a caravan of horses deep into the Himalayas from Shangri-La (as described in the 1933 novel Lost Horizon) to the gates of Tibet.
● In Ritigala, a Buddhist monastery and sacred mountain in Sri Lanka, visitors learn about the country's martial art Angampora through a show.
● A highlight from the Bhutan component is a visit to Paro Taktsang (Tiger's Nest Monastery), one of the country's holiest and most spectacularly positioned sites - having been built into a remote cliff face overlooking dense forest.
● In Japan guests visit a shinto shrine on the island of Itsukushima to see one of the country's most iconic torii gates, which appears to be floating on the water.
● Forest bathing, a term encompassing the health benefits of immersing oneself is nature, is heightened at Mt Gyejok, South Korea, as visitors go barefoot along a 14-kilometer red clay trail through the pines.
● In Laos travelers take part in a Baci Ceremony, a Buddhist ceremony not normally offered to tourists that is believed to provide health and protection.

In addition to each destinations spiritual highlights the tour covers noteworthy cultural sites. For example:

● In Oman guests experience nomadic Bedouin life with a tented-stay in the Wahiba Sands desert.
● One of the most spectacular declarations of both love and Muslim architecture, the Taj Mahal in Agra, is one of the many holy sites visited in India.
● In Myanmar sightseeing gets active with bike tours of both Bagan, with its thousands of temples, and Mandalay, the country's cultural hub.
● One of the world's most well-known archaeological sites, Angkor Wat, and its many surrounding temples form the core of the Cambodia component.
● In Vietnam travelers are escorted from the south to the north with the itinerary including the former capital Hue and the Tu Hieu Pagoda within it, where Thich Nhat Hanh spent his boyhood.

The length of stay in each country ranges from three nights in such destinations as Cambodia and Laos, through to a 16-night multi-city/town tour through China. Each part can be taken on its own or combined with other parts of the itinerary to create a fully customized journey. Prices vary depending on options chosen but for those who partake in the full odyssey rates begin at USD $48,000 (exclusive of international airfares).