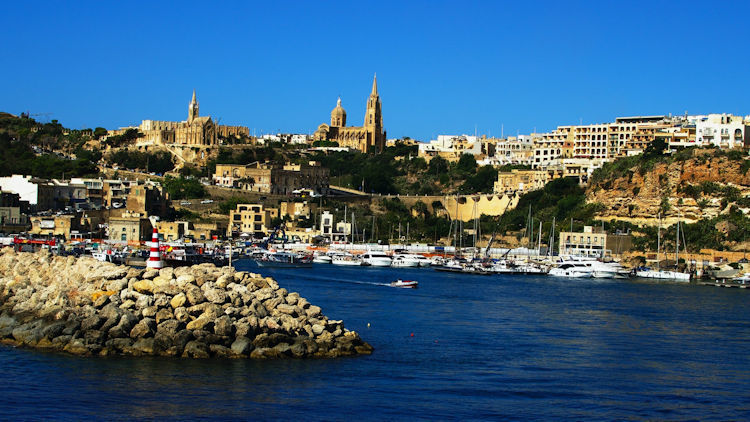 Malta’s charming sister island of Gozo is one of the Mediterranean islands that make up the Maltese archipelago. Gozo is the second largest of the three inhabited Maltese islands and is a bit more quaint and rural than Malta and not overcrowded by tourists. Mythology is an integral part of the island and Gozo is said to have been the home of the mythological Calypso, the nymph from Homer’s Odyssey. The authentic, more remote island is known for its Ġgantija Megalithic Temple ruins, beautiful beaches, and incredible diving sites.

Ġgantija Megalithic Temples The Ġgantija Temples are the earliest set of Megalithic temples that make up this UNESCO World Heritage site. Built between 3600 and 3200 BC, the site is considered as one of the oldest free-standing monuments in the world, preceding Stonehenge and the Egyptian pyramids.

The site is thought to be the same cave Homer mentioned in The Odyssey, where the beautiful nymph Calypso keeps Odysseus as a “prisoner of love” for seven years. The cave overlooks the picturesque Ramla Bay which could very well be the inspiration for the mythical home of Calypso.

Citadella The Citadel of Victoria is the center of the island of Gozo. Considered to be the Medieval part of Victoria, the area was believed to be first fortified during the Bronze Age. The historic fortified city stands on a flat-topped hill, visible from almost all the island.

Old Prison Located in the Citadel of Victoria, the Old Prison served as a communal cell in the 19th century and now hosts a well-preserved exhibition on fortifications. The walls in the Old Prison have the largest known collection of historical graffiti on the Maltese Islands.

Marsalforn Salt Pans The north coast of Gozo is characterized by 350-year-old salt pans protruding into the sea. During the summer months, locals can still be seen scraping up the crystals of salt.

From the main island of Malta, take the Gozo Ferry from Cirkewwa Harbour, at the northernmost point of Malta for the scenic 25-minute crossing to Mġarr Harbour, the gateway to Gozo. The ferry service carrying both passengers and cars runs every 45 minutes during the daytime and regularly during night time. Once in Gozo, you can pick up a car or travel by bike around the island. Boat trips and guided bus tours are also an option to efficiently get around Gozo.