Experience the Most Extravagant Wildlife Spectacle on Earth 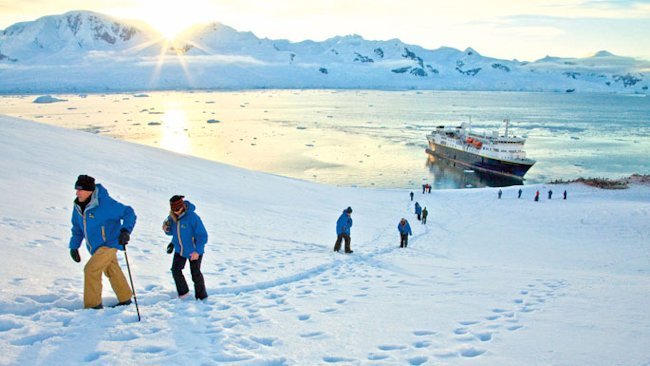 Unanimously rated “the most spectacular place I've ever been” by travelers, and often compared to the Serengeti for the sheer mass of wildlife, the voyage takes place as South Georgia and the Falklands bursts with life after a fruitful summer, and includes time in Buenos Aires.

The one time 19-day wildlife-focused voyage is set aboard the 148-guest National Geographic Explorer and departs on March 7, 2014 – a fitting kick off to the 100th Anniversary celebration of Shackelton's Imperial Trans-Antarctic Expedition (1914-1917).

Steeped in Shackleton and whaling lore, covered mostly in glaciers, South Georgia explodes with life: gentoo, rockhopper and macaroni penguins, enormous elephant seals and a thriving fur seal population. On South Georgia you can observe one of the world's great wildlife spectacles: literally 200,000 stately king penguins on a single beach. See the human face of the region in the Falklands, reminiscent of Great Britain, with grazing sheep, tea and crumpets. And in this privileged place, the albatross reveal the beauty of their mysterious lives. During time in Buenos Aires, guests will enjoy a host of exclusive events. An expedition for wildlife or photography enthusiasts, National Geographic photographer Michael Melford will be joining the expedition to share insider tips and techniques on photography, along with a Lindblad-National Geographic certified photo instructor.

Joining the expedition as a special guest speaker is Dr. Joe MacInnis, Canada's first deep-sea explorer and the first person to explore the ocean beneath the North Pole. Supported by the Canadian government, he led ten research expeditions under the Arctic Ocean to develop the systems and techniques to make scientific surveys beneath the polar ice cap. His teams built the first undersea polar station and discovered the world's northernmost known shipwreck. Among the first to dive to the Titanic, he was recently on James Cameron's Deepsea Challenge team for the historic seven-mile dive into the Mariana Trench.

Book by December 31, 2013 and receive complimentary roundtrip economy airfare from Miami to Ushuaia, plus charter flights from Buenos Aires to Ushuaia, ticketed by Lindblad Expeditions. Offer is valid for new bookings only, is subject to availability at the time of booking and may not be combined with other offers. Rates begin at $14,990 per person in a category 1 cabin based on double occupancy.