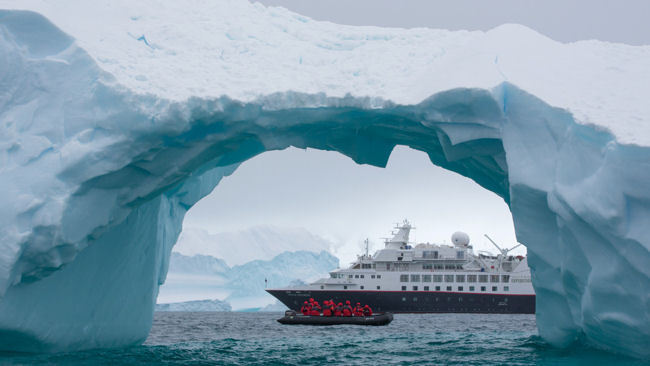 Shackleton's ship, the Endurance, sailed from Plymouth, U.K. towards Antarctica when, in 1915, just 200 miles from the Antarctic mainland, she was trapped between two ice floes in the Weddell Sea. The crew initially stayed put, hoping that the winds would change and free the ship but, after 10 months, they were forced to abandon the Endurance and strike out across the ice in search of help.

The story of how Shackleton led his men in the Weddell Sea party over ice and ocean to safety is one of the greatest survival tales in human history.

The itinerary for Silver Explorer's 18-day Shackleton Centenary Voyages, sailing roundtrip from Ushuaia, offers guests the possibility of exploring on foot or by Zodiac the lands and waterways of the Falkland Islands, South Georgia, Elephant Island, and the Antarctic Peninsula. Voyage departure dates are November 14, 2015, and in 2016: January 3, February 2, and December 22.

Guests will discover how six men traveled in a tiny lifeboat across the Southern Ocean to fetch aid for their stricken crewmates and hear how the rest of the party managed to endure 138 days in one of the most inhospitable places on earth.

On these special voyages, guests will not only follow in the footsteps of the great explorer Shackleton but also encounter wild- and birdlife like nowhere else in the world, including rockhopper, gentoo, king, Adélie, and chinstrap penguins. They will watch for seals, dolphins, whales, albatross, shearwaters, and petrels as well as visit historic sites of the early explorers and remains of whaling operations -- accompanied by a team of experts that includes eminent naturalists, geologists, biologists, historians, and ornithologists.

Silversea's long-term partnership with the Royal Geographical Society (with IBG) will bring other benefits for those booked to travel on Silver Explorer. An exclusive onboard exhibition will show a specially curated gallery of artifacts and images by the Endurance's official photographer Frank Hurley, who documented the expedition on film and through iconic still photography.

There will also be a major exhibition, "The Enduring Eye: the Antarctic Legacy of Sir Ernest Shackleton and Frank Hurley," which will be held at the headquarters of the RGS in London from the end of November 2015 to the end of February 2016, before a U.K. and international tour commences in 2017. Silversea guests sailing on Antarctica voyages will have VIP access to the exhibition, with special tours arranged pre- or post-departure for the White Continent.

The Society's historical collection relating to Antarctica provides a wealth of artifacts, photographs, archives, maps, charts and books which tell the story of the Endurance and Antarctica from its beginnings to the present day with a focus on the early explorers who gave us a greater understanding of the White Continent.

The Shackleton Centenary Voyages aboard the all-suite Silver Explorer include gourmet food, wine and spirits, the personalized service of a butler, and all excursions including Zodiac tours. A special Shackleton centenary commemorative dinner, with an elegant keepsake menu, will include such delicacies as a mousseline of Dover sole, beef Wellington, Antarctic bass filet, and a bitter-chocolate soufflé.