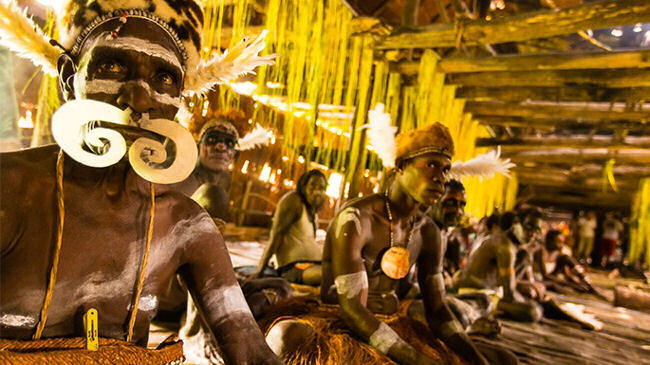 A diverse expedition above, on, and below the sea, the 20 day/17 night Exploring New Guinea: Raja Ampat, Trobriand Islands & the Asmat explores the wild and largely inaccessible terrain where art, tribal life, biology, and history come together in the most extravagant way possible. It departs September 22, 2015.

• Experience the cultures of West Papua, Papua, and Papua New Guinea, as you meet remote people such as the legendary Asmat and Trobriand Islanders for close encounters.
• See the artistry of the Melanesians, sought after by museums and private collectors, first-hand, with the opportunity to collect remarkable carvings and more.
• Swim, snorkel, dive, kayak, and explore via our glass-bottom Zodiac amid prolific fish and coral formations, in places that are lifetime goals of lovers of the undersea world, including Raja Ampat.
• Learn about the region's WW II history, transiting the Torres Strait, separating Australia from New Guinea, and visiting the Japanese submarine base and Yamamoto's bunker in Rabaul, Papua New Guinea.
• Discover birds and plants found nowhere else, including rare birds of paradise.

Joining the renowned team of naturalists, National Geographic photographer, undersea specialist and dive master, are four fascinating Global Perspectives guest speakers who will add a remarkable level of insight including:

• James Bradley: Bradley burst onto the national scene as an author in 2000 with his New York Times #1 best-selling book Flags of Our Fathers. Released as a motion picture in 2007 directed by Clint Eastwood, it is the companion film to the Academy Award-nominated Letters from Iwo Jima.
• Ben Cropp: Renowned filmmaker and explorer, he has produced some 150 marine and wildlife adventure documentaries televised throughout the world. He has discovered over 100 shipwrecks, including the 1977 discovery of Pandora, Australia's most important shipwreck.
• Dr. Lawrence Blair: An expert on the culture, geography and zoology of Indonesia, he has spent much of the past three decades exploring and making films in Indonesia. He wrote and presented, for Sky TV UK, the five-part series Myths, Magic and Monsters; and is also the writer, presenter and co-producer of the internationally acclaimed series Ring of Fire, (PBS & BBC) which won two Emmys.
• Valerie Taylor: Dive legend, shark chronicler, pioneering undersea photographer, filmmaker and National Geographic cover subject, Valerie, and her husband Ron Taylor, gained fame in the early days of scuba diving for their breathtaking live footage of sharks, particularly Great Whites.
Rates per person based on double occupancy in a category 1 cabin begin at $17,390 before special incentives for this voyage – 25% off all cabin fares + $2,000 air credit – and include inclusive bar tab and crew gratuities. Guests will also become a Friend for Life, entitling them to 10% off all future Lindblad voyages for life, plus other benefits.